Marilyn Monroe was an American actress, model and singer. Famous for playing comic "dumb blonde" characters, she became one of the most popular sex symbols of the 1950s and was emblematic of the era's attitudes towards sexuality. Although she was a top-billed actress for only a decade, her films grossed $200 million by the time of her unexpected death in 1962. More than half a century after her death, she continues to be considered a major popular culture icon.

Born and raised in Los Angeles, Monroe spent most of her childhood in foster homes and an orphanage and married at the age of sixteen. While working in a radioplane factory in 1944 as part of the war effort, she was introduced to a photographer from the First Motion Picture Unit and began a successful pin-up modeling career. The work led to short-lived film contracts with Twentieth Century-Fox and Columbia Pictures . After a series of minor film roles, she signed a new contract with Fox in 1951. Over the next two years, she became a popular actress with roles in several comedies, including As Young as You Feel and Monkey Business, and in the dramas Clash by Night and Don't Bother to Knock. Monroe faced a scandal when it was revealed that she had posed for nude photos before becoming a star, but rather than damaging her career, the story resulted in increased interest in her films.

By 1953, Monroe was one of the most marketable Hollywood stars, with leading roles in three films: the noir Niagara, which focused on her sex appeal, and the comedies Gentlemen Prefer Blondes and How to Marry a Millionaire, which established her star image as a "dumb blonde". Although she played a significant role in the creation and management of her public image throughout her career, she was disappointed at being typecast and underpaid by the studio. She was briefly suspended in early 1954 for refusing a film project, but returned to star in one of the biggest box office successes of her career, The Seven Year Itch .

When the studio was still reluctant to change her contract, Monroe founded a film production company in late 1954; she named it Marilyn Monroe Productions . She dedicated 1955 to building her company and began studying method acting at the Actors Studio. In late 1955, Fox awarded her a new contract, which gave her more control and a larger salary. After a critically acclaimed performance in Bus Stop and acting in the first independent production of MMP, The Prince and the Showgirl , she won a Golden Globe for Best Actress for Some Like It Hot . Her last completed film was the drama The Misfits .

Monroe's troubled private life received much attention. She struggled with substance abuse, depression, and anxiety. She had two highly publicized marriages, to retired baseball star Joe DiMaggio and playwright Arthur Miller, both of which ended in divorce. On August 5, 1962, she died at age 36 from an overdose of barbiturates at her home in Los Angeles. Although Monroe's death was ruled a probable suicide, several conspiracy theories have been proposed in the decades following her death. 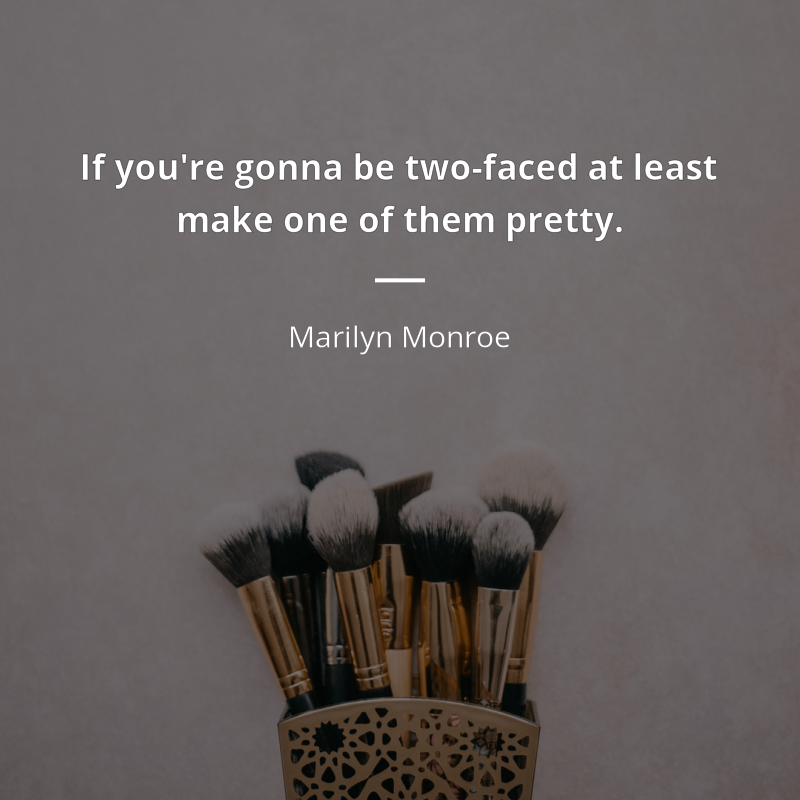 „If you're gonna be two-faced at least make one of them pretty.“

„The thing I want more than anything else? I want to have children. I used to feel for every child I had, I would adopt another.“

„Diamonds Are a Girl's Best Friend. “

„I am not a victim of emotional conflicts. I am human.“

Source: Marilyn: Her Life in Her Own Words

„This life is what you make it. No matter what, you're going to mess up sometimes, it's a universal truth. But the good part is you get to decide how you're going to mess it up. Girls will be your friends - they'll act like it anyway. But just remember, some come, some go. The ones that stay with you through everything - they're your true best friends. Don't let go of them. Also remember, sisters make the best friends in the world. As for lovers, well, they'll come and go too. And baby, I hate to say it, most of them - actually pretty much all of them are going to break your heart, but you can't give up because if you give up, you'll never find your soulmate. You'll never find that half who makes you whole and that goes for everything. Just because you fail once, doesn't mean you're gonna fail at everything. Keep trying, hold on, and always, always, always believe in yourself, because if you don't, then who will, sweetie? So keep your head high, keep your chin up, and most importantly, keep smiling, because life's a beautiful thing and there's so much to smile about.“

„Unfortunately, I am involved in a freedom ride protesting the loss of the minority rights belonging to the few remaining earthbound stars. All we demanded was our right to twinkle.“

Last words to Peter Lawford (5 August 1962), as quoted at Spiegel Online http://www.spiegel.de/kultur/literatur/0,1518,475898,00.htmlVariant: Say good-bye to Pat, say good-bye to Jack and say good-bye to yourself, because you're a nice guy.

„I know I will never be happy but I know I can be gay!“

As quoted in a letter to her psychiatrist, Dr. Greenson, in 1961. Fragments, by Stanley Buchthal and Bernard Comment (2010)

Variant: Imperfection is beauty, madness is genius and it's better to be absolutely ridiculous than absolutely boring.

„You never know what life is like, until you have lived it.“

„I believe that everything happens for a reason. People change so that you can learn to let go, things go wrong so that you appreciate them when they're right, you believe lies so you eventually learn to trust no one but yourself, and sometimes good things fall apart so better things can fall together.“

„The real lover is the man who can thrill you by kissing your forehead or smiling into your eyes or just staring into space.“

„When it comes down to it, I let them think what they want. If they care enough to bother with what I do, then I'm already better than them.“

„The truth is I've never fooled anyone. I've let people fool themselves. They didn't bother to find out who and what I was.“

Source: On Being Blonde (2007), p. 52Context: The truth is I've never fooled anyone. I've let people fool themselves. They didn't bother to find out who and what I was. Instead they would invent a character for me. I wouldn't argue with them. They were obviously loving somebody I wasn't. When they found this out, they would blame me for disillusioning them and fooling them.

„I just want to be wonderful.“

As quoted in Ms. magazine (August 1972) p. 41Variant: I'm not interested in money, I just want to be wonderful.

„Keep smiling, because life is a beautiful thing and there's so much to smile about.“

„I am good, but not an angel. I do sin, but I am not the devil. I am just a small girl in a big world trying to find someone to love.“

lead singer of The Doors