Kurt Donald Cobain was an American musician, artist, singer, songwriter, guitarist and poet. Born in Aberdeen, Washington, Cobain formed the band Nirvana with Krist Novoselic in 1987 and established it as part of the Seattle music scene and grunge genre. Nirvana's debut album Bleach was released on the independent record label Sub Pop in 1989.

After signing with major label DGC Records, Nirvana found breakthrough success with "Smells Like Teen Spirit" from their second album Nevermind . Following the success of Nevermind, Nirvana was labeled "the flagship band" of Generation X, and Cobain hailed as "the spokesman of a generation". Cobain, however, was uncomfortable with the label, believing his message and artistic vision had been misinterpreted by the public, with his personal problems often subject to media attention.

During the last years of his life, Cobain struggled with heroin addiction, chronic health problems and depression. He also had difficulty coping with his fame and public image, and the professional and personal pressures surrounding himself and his wife, musician Courtney Love. On April 8, 1994, Cobain was found dead at his home in Seattle; the death was ruled a suicide by a self-inflicted shotgun wound to the head. The circumstances of his death at age 27 have become a topic of public fascination and debate. Since their debut, Nirvana, with Cobain as a songwriter, has sold over 25 million albums in the U.S., and over 75 million worldwide. Cobain was posthumously inducted into the Rock and Roll Hall of Fame in 2014, along with Nirvana bandmates Krist Novoselic and Dave Grohl, in their first year of eligibility.

„Just because you're paranoid, does not mean they're not out to get you.“

Song lyrics, Nevermind (1991)Variant: Just because you're paranoid doesn't mean they aren't after you.Source: This quote is generally attributed to Joseph Heller from his novel Catch-22, although it appears to be from the film version only (screenplay by Buck Henry.) https://en.wikipedia.org/wiki/Talk%3AParanoia Territorial Pissings.

Variant: Wanting to be someone else is the waste of who you are

„My heart is broke, but I have some glue, help me inhale and mend it with you.“

„Rape is one of the most terrible crimes on earth. And it happens every few minutes.“

„I’m not mad. I’m in a perfectly happy mood, you asshole.“

„At this point I have a request for our fans. If any of you in any way hate homosexuals, people of different color, or women, please do this one favor for us - leave us the fuck alone! Don't come to our shows and don't buy our records.“

„If my eyes could show my soul, everyone would cry when they saw me smile.“ 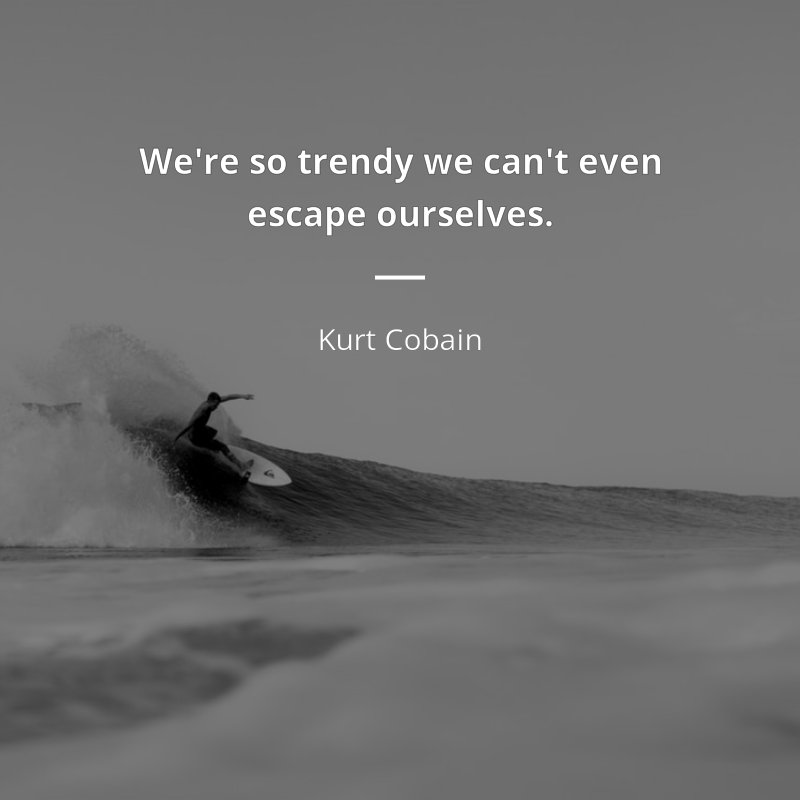 „We're so trendy we can't even escape ourselves.“

„What's the matter with all you people at the back, did you come here to see Gloria Estefan?“

„I would like to think there's some purity in us, yeah. Naive - y'know, purposely naive.“

„I wouldn't have been surprised if they had voted me Most Likely To Kill Everyone At A High School Dance.“

„Last year, a girl was raped by two wastes of sperm and eggs while they sang the lyrics to our song "Polly". I have a hard time carrying on knowing there are plankton like that in our audience.“

„Words suck. I mean, every thing has been said. I can't remember the last real interesting conversation I've had in a long time. Words aren't as important as the energy derived from music, especially live.“

„Punk rock should mean freedom, liking and excepting anything that you like. Playing whatever you want. As sloppy as you want. As long as it's good and it has passion.“