Abraham Lincoln was an American statesman and lawyer who served as the 16th President of the United States from March 1861 until his assassination in April 1865. Lincoln led the United States through its Civil War—its bloodiest war and perhaps its greatest moral, constitutional, and political crisis. In doing so, he preserved the Union, paved the way to the abolition of slavery, strengthened the federal government, and modernized the economy.

Born in Hodgenville, Kentucky, Lincoln grew up on the western frontier in Kentucky and Indiana. Largely self-educated, he became a lawyer in Illinois, a Whig Party leader, and was elected to the Illinois House of Representatives, in which he served for eight years. Elected to the United States House of Representatives in 1846, Lincoln promoted rapid modernization of the economy and opposed the Mexican–American War. After a single term, he returned to Illinois and resumed his successful law practice. Reentering politics in 1854, he became a leader in building the new Republican Party, which had a statewide majority in Illinois. As part of the 1858 campaign for US Senator from Illinois, Lincoln took part in a series of highly publicized debates with his opponent and rival, Democrat Stephen A. Douglas; Lincoln spoke out against the expansion of slavery, but lost the race to Douglas. In 1860, Lincoln secured the Republican Party presidential nomination as a moderate from a swing state, though most delegates originally favored other candidates. Though he gained very little support in the slaveholding states of the South, he swept the North and was elected president in 1860.

Though there were attempts to bridge the differences between North and South, ultimately Lincoln's victory prompted seven southern slave states to secede from the United States and form the Confederate States of America before he moved into the White House. The Confederate attack on Fort Sumter inspired the North to enthusiastically rally behind the Union. As the leader of the moderate faction of the Republican Party, Lincoln confronted Radical Republicans, who demanded harsher treatment of the South, War Democrats, who rallied a large faction of former opponents into his camp, anti-war Democrats , who despised him, and irreconcilable secessionists, who plotted his assassination. Lincoln fought back by pitting his opponents against each other, by carefully planned political patronage, and by appealing to the American people with his powers of oratory. His Gettysburg Address became an iconic endorsement of nationalism, republicanism, equal rights, liberty, and democracy. Lincoln concentrated on the military and political dimensions of the war in order to reunite the nation. He suspended habeas corpus, leading to the controversial ex parte Merryman decision, and he averted potential British intervention by defusing the Trent Affair. Lincoln closely supervised the war effort, especially the selection of generals, including his most successful general, Ulysses S. Grant. He made major decisions on Union war strategy, including a naval blockade that shut down the South's trade. As the war progressed, his complex moves toward ending slavery included the Emancipation Proclamation of 1863; Lincoln used the U.S. Army to protect escaped slaves, encouraged the border states to outlaw slavery, and pushed through Congress the Thirteenth Amendment to the United States Constitution, which permanently outlawed slavery.

An astute politician deeply involved with power issues in each state, Lincoln reached out to the War Democrats and managed his own re-election campaign in the 1864 presidential election. Anticipating the war's conclusion, Lincoln pushed a moderate view of Reconstruction, seeking to reunite the nation speedily through a policy of generous reconciliation in the face of lingering and bitter divisiveness. On April 14, 1865, five days after the surrender of Confederate general Robert E. Lee, Lincoln was assassinated by Confederate sympathizer John Wilkes Booth and died the next day. Lincoln has been consistently ranked both by scholars and the public as among the greatest U.S. presidents.

„Do I not destroy my enemies when I make them my friends?“

His response when "accused of treating his opponents with too much courtesy and kindness, and when it was pointed out to him that his whole duty was to destroy them", as quoted in More New Testament Words (1958) by William Barclay; either this anecdote or Lincoln's reply may have been adapted from a reply attributed to Holy Roman Emperor Sigismund:
:* Some courtiers reproached the Emperor Sigismond that, instead of destroying his conquered foes, he admitted them to favour. “Do I not,” replied the illustrious monarch, “effectually destroy my enemies, when I make them my friends?”
::* "Daily Facts" in The Family Magazine Vol. IV (1837), p. 123 http://books.google.de/books?id=aW0EAAAAQAAJ&pg=PA123&dq=destroy; also quoted as simply in "Do I not effectually destroy my enemies, in making them my friends?" in The Sociable Story-teller (1846)Disputed

„Whatever you are, be a good one.“

„And in the end, it’s not the years in your life that count. It’s the life in your years.“

„To ease another's heartache is to forget one's own.“

Quoted in a Edith A. Sawyer (1899), Mary CameronMisattributed

„Their thinking it right, and our thinking it wrong, is the precise fact upon which depends the whole controversy.“

1860s, Allow the humblest man an equal chance (1860)Context: Slavery is wrong. If Slavery is right, all words, acts, laws, and Constitutions against it, are themselves wrong, and should be silenced, and swept away. If it is right, we cannot justly object to its nationality — its universality; if it is wrong they cannot justly insist upon its extension — its enlargement. All they ask, we could readily grant, if we thought Slavery right; all we ask, they could as readily grant, if they thought it wrong. Their thinking it right, and our thinking it wrong, is the precise fact upon which depends the whole controversy. Thinking it right as they do, they are not to blame for desiring its full recognition, as being right; but, thinking it wrong, as we do, can we yield to them? Can we cast our votes with their view, and against our own? In view of our moral, social, and political responsibilities, can we do this?
Wrong as we think Slavery is, we can yet afford to let it alone where it is, because that much is due to the necessity arising from its actual presence in the nation; but can we, while our votes will prevent it, allow it to spread into the National Territories, and to overrun us here in these Free States?
If our sense of duty forbids this, then let us stand by our duty, fearlessly and effectively. Let us be diverted by none of those sophistical contrivances wherewith we are so industriously plied and belabored — contrivances such as groping for middle ground between the right and the wrong, vain as the search for a man who should be neither a living man nor a dead man — such as a policy of "don't care" on a question about which all true men do care — such as Union appeals beseeching true Union men to yield to Disunionists, reversing the divine rule, and calling, not the sinners, but the righteous to repentance — such as invocations of Washington, imploring men to unsay what Washington did.

„Let no feeling of discouragement prey
upon you, and in the end you
are sure to succeed.“

„Folks are usually about as happy as they make their minds up to be.“

Curiously in later books Crane, e.g. Four Minute Essays, 1919, Adventures in Common Sense, 1920, "21", 1930, Crane mentions other routes to happiness and does not again use this quote.

Marden used a great many quotes in his writings, without giving sources. Whilst sources for many of the quotes can be found, this is not true for all. For instance he mentions another story in which Lincoln says "Madam, you have not a peg to hang your case on"; this also does not seem to found in Lincoln sources.

„America will never be destroyed from the outside. If we falter and lose our freedoms, it will be because we destroyed ourselves.“

First attributed to Lincoln in 2002, this seems a paraphrase of a statement in the Lyceum address of 1838, while incorporating language used by Thomas E. Dewey (c. 1944), who said "By the same token labor unions can never be destroyed from the outside. They can only fail if they fail to lend their united support to full production in a free society".Misattributed

„My Best Friend is a person who will give me a book I have not read.“

„Nearly all men can stand adversity, but if you want to test a man's character, give him power.“

Widely attributed to Lincoln, this appears to be derived from Thomas Carlyle's general comment below, but there are similar quotes about Lincoln in his biographies.Adversity is sometimes hard upon a man; but for one man who can stand prosperity, there are a hundred that will stand adversity.Thomas Carlyle (1841) On Heroes and Hero Worship.Any man can stand adversity — only a great man can stand prosperity.Horatio Alger (1883), Abraham Lincoln: The Backwoods Boy; or, How a Young Rail-Splitter became PresidentMost people can bear adversity; but if you wish to know what a man really is give him power. This is the supreme test. It is the glory of Lincoln that, having almost absolute power, he never used it except on the side of mercy.Robert G. Ingersoll (1883), Unity: Freedom, Fellowship and Character in Religion, Volume 11, Number 3, The Exchange Table, True Greatness Exemplified in Abraham Lincoln, by Robert G. Ingersoll (excerpt), Quote Page 55, Column 1 and 2, Chicago, Illinois. ( Google Books Full View https://books.google.com/books?id=JUIrAAAAYAAJ&q=%22man+really%22#v=snippet&)If you want to discover just what there is in a man — give him power.Francis Trevelyan Miller (1910), Portrait Life of Lincoln: Life of Abraham Lincoln, the Greatest AmericanAny man can handle adversity. If you truly want to test a man's character, give him power.Attributed in the electronic game InfamousMisattributed

„My concern is not whether God is on our side; my greatest concern is to be on God's side, for God is always right.“

„I'm a success today because I had a friend who believed in me and I didn't have the heart to let him down.“

„Books serve to show a man that those original thoughts of his aren't very new after all.“

„When I do good I feel good, when I do bad I feel bad, and that's my religion.“

Quoted in 3:439 Herndon's Lincoln (1890), p. 439 http://books.google.com/books?id=rywOAAAAIAAJ&pg=PA439&dq=%22when+i+do+good+i+feel+good%22: Inasmuch as he was so often a candidate for public office Mr. Lincoln said as little about his religious code as possible, especially if he failed to coincide with the orthodox world. In illustration of his religious code I once heard him say that it was like that of an old man named Glenn, in Indiana, whom he heard speak at a church meeting, and who said: "When I do good I feel good, when I do bad I feel bad, and that's my religion."Posthumous attributions 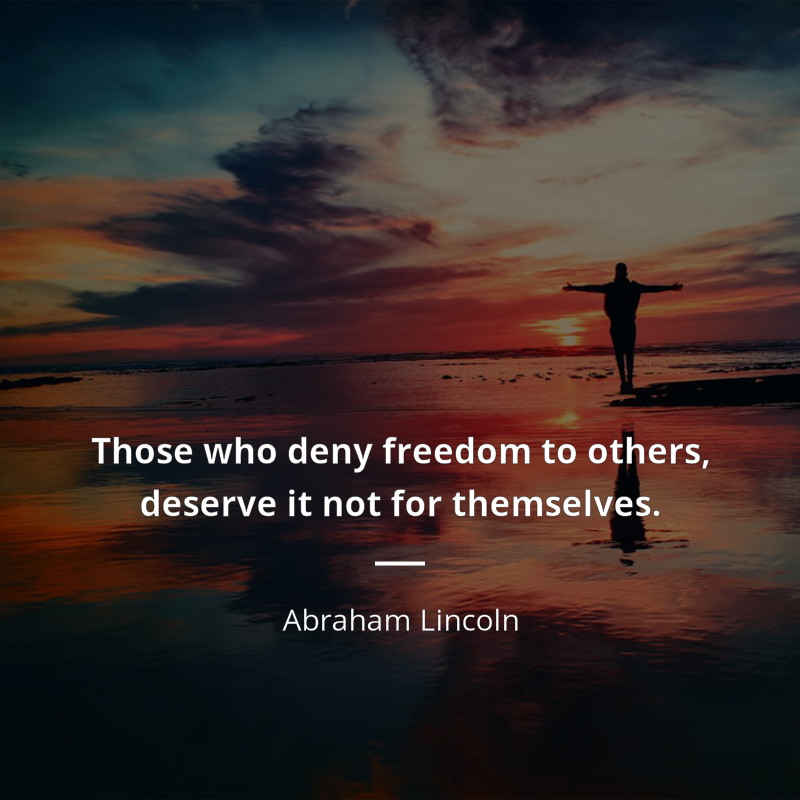 „Those who deny freedom to others, deserve it not for themselves.“

Variant: Those who deny freedom to others deserve it not for themselves, and, under a just God cannot retain it.Source: Complete Works - Volume XII

„Whenever I hear anyone arguing for slavery, I feel a strong impulse to see it tried on him personally.“

„I am a slow walker, but I never walk back.“

„There are no bad pictures; that's just how your face looks sometimes.“

„Those who look for the bad in people will surely find it.“

„I can see how it might be possible for a man to look down upon the earth and be an atheist, but I cannot conceive how he could look up into the heavens and say there is no God.“