His writing was influenced by the social, cultural, and economic ambiance of his home city of Los Angeles. His work addresses the ordinary lives of poor

Americans, the act of writing, alcohol, relationships with women, and the drudgery of work. Bukowski wrote thousands of poems, hundreds of short stories and six novels, eventually publishing over 60 books. The FBI kept a file on him as a result of his column Notes of a Dirty Old Man in the LA underground newspaper Open City.Bukowski published extensively in small literary magazines and with small presses beginning in the early 1940s and continuing on through the early 1990s. As noted by one reviewer, "Bukowski continued to be, thanks to his antics and deliberate clownish performances, the king of the underground and the epitome of the littles in the ensuing decades, stressing his loyalty to those small press editors who had first championed his work and consolidating his presence in new ventures such as the New York Quarterly, Chiron Review, or Slipstream." Some of these works include his Poems Written Before Jumping Out of an 8 Story Window, published by his friend and fellow poet Charles Potts, and better known works such as Burning in Water, Drowning in Flame. These poems and stories were later republished by John Martin's Black Sparrow Press as collected volumes of his work.

In 1986 Time called Bukowski a "laureate of American lowlife". Regarding Bukowski's enduring popular appeal, Adam Kirsch of The New Yorker wrote, "the secret of Bukowski's appeal ... [is that] he combines the confessional poet's promise of intimacy with the larger-than-life aplomb of a pulp-fiction hero."Since his death in 1994, Bukowski has been the subject of a number of critical articles and books about both his life and writings, despite his work having received relatively little attention from academic critics in America during his lifetime. In contrast, Bukowski enjoyed extraordinary fame in Europe, especially in Germany, the place of his birth. Wikipedia

Photo: Artgal73, User's work; This photo depicts Charles Bukowski, along with his friends, "John Smith, and Jane Doe". I took this photograph in 1988. (then, the subjects are identified in Swissler and Gleason) / CC BY 2.5

Love Is a Dog from Hell

Notes of a Dirty Old Man

Betting on the Muse: Poems and Stories

South of No North

and even during the
best moments
and
the greatest times
times

we will know it

we will know it
more than
ever

we will wait
and
wait

„we only asked for leopards to guard
our thinning dreams.“

—  Charles Bukowski, book The People Look Like Flowers at Last

„I guess the only time most people think about injustice is when it happens to them.“

„people run from rain but
sit
in bathtubs full of
water.“

„If you have the ability to love, love yourself first.“

„Do you hate people?”

“I don't hate them… I just feel better when they're not around.“ 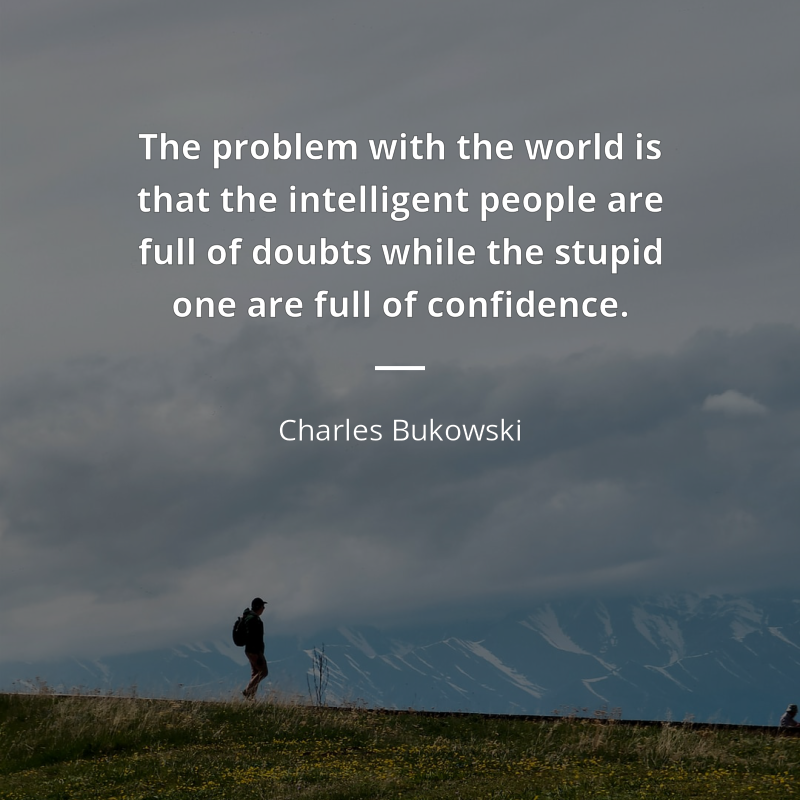 „The problem with the world is that the intelligent people are full of doubts while the stupid one are full of confidence.“

Variant: The problem with the world is that the intelligent people are full of doubts, while the stupid ones are full of confidence.

„Things get bad for all of us, almost continually, and what we do under the constant stress reveals who/what we are.“

Source: What Matters Most is How Well You Walk Through the Fire

„My ambition is handicapped by my laziness.“

„People empty me. I have to get away to refill.“

„I wanted the whole world or nothing.“

„There is always one woman to save you from another and as that woman saves you she makes ready to destroy.“

—  Charles Bukowski, book Love Is a Dog from Hell

Source: Love Is a Dog from Hell

„For those who believe in God, most of the big questions are answered. But for those of us who can't readily accept the God formula, the big answers don't remain stonewritten. We adjust to new conditions and discoveries. We are pliable. Love need not be a command or faith a dictum. I am my own God. We are here to unlearn the teachings of the church, state and our educational system. We are here to drink beer. We are here to kill war. We are here to laugh at the odds and live our lives so well that Death will tremble to take us.“

„it's colder than hell (yes) but
the blankets are thin,
and the pulled-down shades
are as full of holes as love is.“

—  Charles Bukowski, book The People Look Like Flowers at Last

„How in the hell could a man enjoy being awakened at 8:30 a.m. by an alarm clock, leap out of bed, dress, force-feed, piss, brush teeth and hair, and fight traffic to get to a place where essentially you made lots of money for somebody else and were asked to be grateful for the opportunity to do so?“

„We don’t even ask happiness, just a little less pain.“