Ava Lavinia Gardner was an American actress and singer. Gardner was signed to a contract with Metro-Goldwyn-Mayer in 1941, and appeared mainly in small roles until she drew attention with her performance in The Killers . She was nominated for the Oscar for Best Actress for her work in Mogambo , and also received BAFTA Award and Golden Globe Award nominations for other films.

Gardner appeared in several high-profile films from the 1940s to 1970s, including The Hucksters , Show Boat , Pandora and the Flying Dutchman , The Snows of Kilimanjaro , The Barefoot Contessa , Bhowani Junction , On the Beach , 55 Days at Peking , Seven Days in May , The Night of the Iguana , The Bible: In the Beginning... , Mayerling , Tam-Lin , The Life and Times of Judge Roy Bean , Earthquake , and The Cassandra Crossing . Gardner continued to act regularly until 1986, four years before her death in London in 1990, at the age of 67.

She is listed 25th among the American Film Institute's 25 Greatest Female Stars of Classic Hollywood Cinema.

„On The Beach is a story about the end of the world, and Melbourne sure is the right place to film it.“

In 1959 during the filming of On the Beach.This has become a standing joke about Melbourne, but it's almost certainly either apocryphal or a misquotation.Misattributed

„Sex isn't all that important, but it is when you love someone very much.“

„When I’m old and gray, I want to have a house by the sea. And paint. With a lot of wonderful chums, good music, and booze around. And a damn good kitchen to cook in.“ 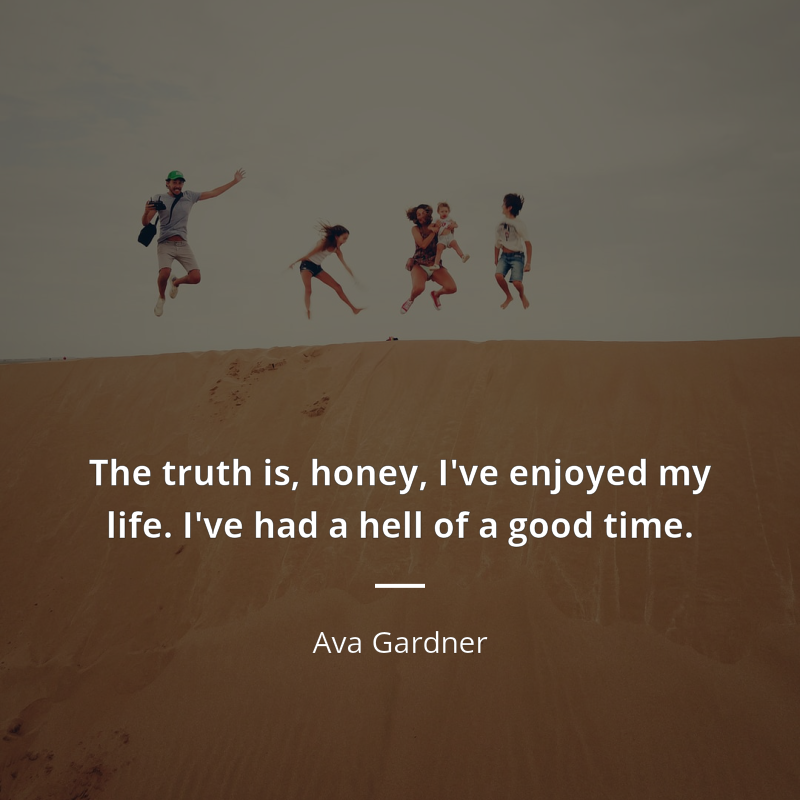 „I wish to live to 150 years old, but the day I die, I wish it to be with a cigarette in one hand and a glass of whiskey in the other.“

„When I lose my temper, honey, you can't find it any place.“

„Maybe, in the final analysis, they saw me as something I wasn't and I tried to turn them into something they could never be. I loved them all but maybe I never understood any of them. I don't think they understood me.“

„God knows I've got so many frailties myself, I ought to be able to understand and forgive them in others. But I don't.“

„I have only one rule in acting--trust the director, and give him heart and soul.“

„Hell, I suppose if you stick around long enough they have to say something nice about you.“

„I think the main reason my marriages failed is that I always loved too well but never wisely.“