Andy Warhol was an American artist, film director, and producer who was a leading figure in the visual art movement known as pop art. His works explore the relationship between artistic expression, advertising, and celebrity culture that flourished by the 1960s, and span a variety of media, including painting, silkscreening, photography, film, and sculpture. Some of his best known works include the silkscreen paintings Campbell's Soup Cans and Marilyn Diptych , the experimental film Chelsea Girls , and the multimedia events known as the Exploding Plastic Inevitable .

Born and raised in Pittsburgh, Warhol initially pursued a successful career as a commercial illustrator. After exhibiting his work in several galleries in the late 1950s, he began to receive recognition as an influential and controversial artist. His New York studio, The Factory, became a well-known gathering place that brought together distinguished intellectuals, drag queens, playwrights, Bohemian street people, Hollywood celebrities, and wealthy patrons. He promoted a collection of personalities known as Warhol superstars, and is credited with inspiring the widely used expression "15 minutes of fame." In the late 1960s, he managed and produced the experimental rock band The Velvet Underground and founded Interview magazine. He authored numerous books, including The Philosophy of Andy Warhol and Popism: The Warhol Sixties. He lived openly as a gay man before the gay liberation movement. After gallbladder surgery, Warhol died of cardiac arrhythmia in February 1987 at the age of 58.

Warhol has been the subject of numerous retrospective exhibitions, books, and feature and documentary films. The Andy Warhol Museum in his native city of Pittsburgh, which holds an extensive permanent collection of art and archives, is the largest museum in the United States dedicated to a single artist. Many of his creations are very collectible and highly valuable. The highest price ever paid for a Warhol painting is US$105 million for a 1963 canvas titled Silver Car Crash ; his works include some of the most expensive paintings ever sold. A 2009 article in The Economist described Warhol as the "bellwether of the art market".

The Philosophy of Andy Warhol 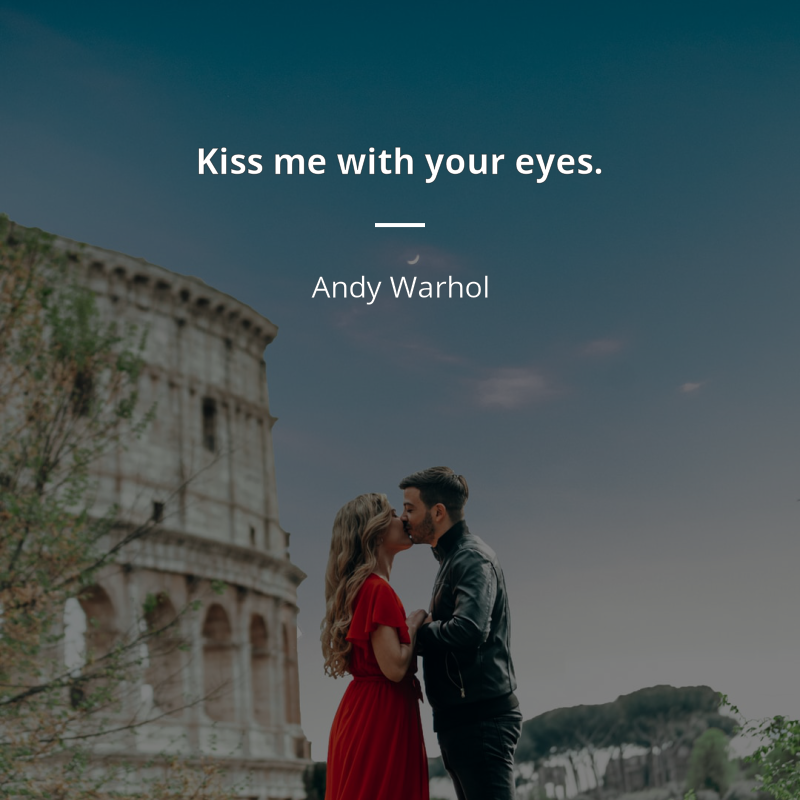 „Kiss me with your eyes.“

„Sometimes people let the same problem make them miserable for years when they could just say, "So what." That's one of my favorite things to say. "So what." "My mother didn't love me." So what. "My husband won't ball me." So what. "I'm a success but I'm still alone." So what. I don't know how I made it through all the years before I learned how to do that trick. It took a long time for me to learn it, but once you do, you never forget.“

„I'm afraid that if you look at a thing long enough, it loses all of its meaning.“

„They always say that time changes things, but you actually have to change them yourself.“

„Don't pay any attention to what they write about you. Just measure it in inches.“

„When people are ready to, they change. They never do it before then, and sometimes they die before they get around to it. You can't make them change if they don't want to, just like when they do want to, you can't stop them.“

Source: Andy Warhol in His Own Words

„Art is what you can get away with.“

„As soon as you stop wanting something, you get it.“

„The idea of waiting for something makes it more exciting“

Variant: The idea of waiting for something makes it more exciting.

„I think having land and not ruining it is the most beautiful art that anybody could ever want.“

„It does not matter how slowly you go so long as you do not stop.“

„I wonder if it's possible to have a love affair that lasts forever.“

„You have to do stuff that average people don't understand because those are the only good things.“

„I think everybody should be nice to everybody.“

„An artist is somebody who produces things that people don't need to have.“

Source: Andy Warhol, Thirty Are Better Than One

„Everybody must have a fantasy.“

Source: The Philosophy of Andy Warhol

„Sometimes the little times you don't think are anything while they're happening turn out to be what marks a whole period of your life.“

Source: 1975, Ch. 7: TimeContext: Sometimes you're invited to a big ball and for months you think about how glamorous and exciting it's going to be. Then you fly to Europe and you go to the ball and when you think back on it a couple of months later what you remember is maybe the car ride to the ball, you can't remember the ball at all. Sometimes the little times you don't think are anything while they're happening turn out to be what marks a whole period of your life. I should have been dreaming for months about the car ride to the ball and getting dressed for the car ride, and buying my ticket to Europe so I could take the car ride. Then, who knows, maybe I could have remembered the ball.

„Don't think about making art, just get it done. Let everyone else decide if it's good or bad, whether they love it or hate it. While they are deciding, make even more art.“