Lee Jun-fan , known professionally as Bruce Lee, was a Hong Kong and American actor, film director, martial artist, martial arts instructor, philosopher and founder of the martial art Jeet Kune Do. Lee was the son of Cantonese opera star Lee Hoi-chuen. He is widely considered by commentators, critics, media, and other martial artists to be one of the most influential martial artists of all time, and a pop culture icon of the 20th century. He is often credited with helping to change the way Asians were presented in American films.

Lee was born in Chinatown, San Francisco, on November 27, 1940, to parents from Hong Kong and was raised in Kowloon, Hong Kong, with his family until his late teens. He was introduced to the film industry by his father and appeared in several films as a child actor. Lee moved to the United States at the age of 18 to receive his higher education, at the University of Washington, at Seattle and it was during this time that he began teaching martial arts. His Hong Kong and Hollywood-produced films elevated the traditional Hong Kong martial arts film to a new level of popularity and acclaim, sparking a surge of interest in Chinese martial arts in the West in the 1970s. The direction and tone of his films changed and influenced martial arts and martial arts films in the US, Hong Kong and the rest of the world.

He is noted for his roles in five feature-length films: Lo Wei's The Big Boss and Fist of Fury ; Golden Harvest's Way of the Dragon , directed and written by Lee; Golden Harvest and Warner Brothers' Enter the Dragon and The Game of Death , both directed by Robert Clouse. Lee became an iconic figure known throughout the world, particularly among the Chinese, as he portrayed Chinese nationalism in his films. He trained in the art of Wing Chun and later combined his other influences from various sources, in the spirit of his personal martial arts philosophy, which he dubbed Jeet Kune Do . Lee held dual nationality in Hong Kong and the US. He died in Kowloon Tong on July 20, 1973 at the age of 32.

Tao of Jeet Kune Do

„Always be yourself, express yourself, have faith in yourself, do not go out and look for a successfull personality and duplicate it.“

„If there is a God, he is within. You don't ask God to give you things, you depend on God for your inner theme.“

„Notice that the stiffest tree is most easily cracked, while the bamboo or willow survives by bending with the wind.“

Variant: Absorb what is useful, discard what is useless and add what is specifically your own Source: Bruce Lee — Wisdom for the Way

„To hell with circumstances; I create opportunities.“ 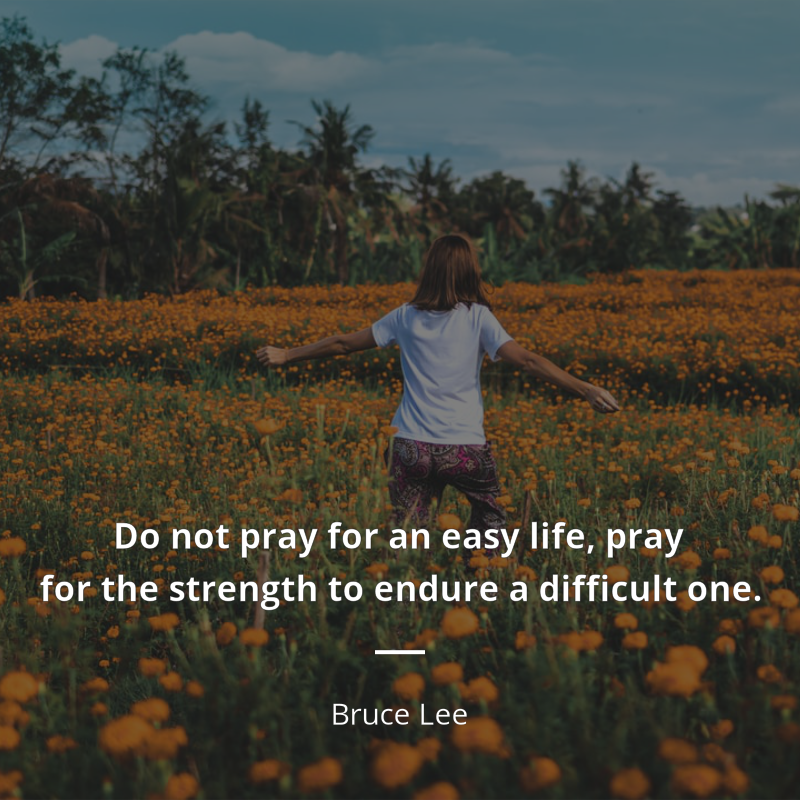 „Do not pray for an easy life, pray for the strength to endure a difficult one“

„Love is like a friendship caught on fire. In the beginning a flame, very pretty, often hot and fierce, but still only light and flickering. As love grows older, our hearts mature and our love becomes as coals, deep-burning and unquenchable.“

For Boyfriend, For Him, Wedding, Valentine's Day

„There is no such thing as maturity. There is instead an ever-evolving process of maturing.“

Source: The Warrior Within : The Philosophies of Bruce Lee (1996), p. 131 Context: There is no such thing as maturity. There is instead an ever-evolving process of maturing. Because when there is a maturity, there is a conclusion and a cessation. That’s the end. That’s when the coffin is closed. You might be deteriorating physically in the long process of aging, but your personal process of daily discovery is ongoing. You continue to learn more and more about yourself every day.

„Fluidity is the way to an empty mind. You must free your ambitious mind and learn the art of dying.“

„Mistakes are always forgivable, if one has the courage to admit them.“

„Whether or not we can get together, remember well that art “lives” where absolute freedom is.“

Source: The Warrior Within : The Philosophies of Bruce Lee (1996), p. 156 Context: Whether or not we can get together, remember well that art “lives” where absolute freedom is. With all the training thrown to nowhere, with a mind (if there is such a verbal substance) perfectly unaware of its own working, with the “self” vanishing nowhere, the art of JKD attains its perfection.

„Be like water making its way through cracks. Do not be assertive, but adjust to the object, and you shall find a way around or through it. If nothing within you stays rigid, outward things will disclose themselves.

„A wise man can learn more from a foolish question than a fool can learn from a wise answer.“

„Be happy, but never satisfied.“

„Because one does not want to be disturbed, to be made uncertain, he establishes a pattern of conduct, of thought, a pattern of relationship to man etc. Then he becomes a slave to the patter and takes the pattern to be the real thing.“

„Don't fear failure. — Not failure, but low aim, is the crime. In great attempts it is glorious even to fail.“

Russian and Soviet poet, playwright, artist and stage and f…