Frank Vincent Zappa was an American multi-instrumentalist musician, composer, and bandleader. His work is characterized by nonconformity, free-form improvisation, sound experiments, musical virtuosity, and satire of American culture. In a career spanning more than 30 years, Zappa composed rock, pop, jazz, jazz fusion, orchestral and musique concrète works, and produced almost all of the 60-plus albums that he released with his band the Mothers of Invention and as a solo artist. Zappa also directed feature-length films and music videos, and designed album covers. He is considered one of the most innovative and stylistically diverse rock musicians of his era.As a self-taught composer and performer, Zappa's diverse musical influences led him to create music that was sometimes difficult to categorize. While in his teens, he acquired a taste for 20th-century classical modernism, African-American rhythm and blues, and doo-wop music. He began writing classical music in high school, while at the same time playing drums in rhythm and blues bands, later switching to electric guitar. His 1966 debut album with the Mothers of Invention, Freak Out!, combined songs in conventional rock and roll format with collective improvisations and studio-generated sound collages. He continued this eclectic and experimental approach, irrespective of whether the fundamental format was rock, jazz or classical.

Zappa's output is unified by a conceptual continuity he termed "Project/Object", with numerous musical phrases, ideas, and characters reappearing across his albums. His lyrics reflected his iconoclastic views of established social and political processes, structures and movements, often humorously so, and he has been described as the "godfather" of comedy rock. He was a strident critic of mainstream education and organized religion, and a forthright and passionate advocate for freedom of speech, self-education, political participation and the abolition of censorship. Unlike many other rock musicians of his generation, he personally disapproved of drugs, but supported their decriminalization and regulation.

During Zappa's lifetime, he was a highly productive and prolific artist with a controversial critical standing; supporters of his music admired its compositional complexity, while critics found it lacking emotional depth. He had some commercial success, particularly in Europe, and worked as an independent artist for most of his career. He remains a major influence on musicians and composers. His honors include his 1995 induction into the Rock and Roll Hall of Fame and the 1997 Grammy Lifetime Achievement Award. In 2000, he was ranked number 36 on VH1's 100 Greatest Artists of Hard Rock. In 2004, Rolling Stone magazine ranked him at number 71 on its list of the "100 Greatest Artists of All Time", and in 2011 at number 22 on its list of the "100 Greatest Guitarists of All Time".

„Communism doesn't work because people like to own stuff.“

„One size does not fit all.“

„A mind is like a parachute. It doesn't work if it is not open.“

„There isn’t anything weird about my music.“

Oui interview (1979)Context: There isn’t anything weird about my music. Weird is a skeleton in the closet, wearing a rubber mask with warts all over its nose, and all that kind of shit. That’s not what I do. The thing that makes my music unusual is that people only hear one kind of music all the time over the radio. It’s wallpaper to their lives. Audile wallpaper. There’s one acceptable beat and there are three acceptable chord progressions. There are five acceptable words: baby, love, tears, yat yat. Just because I don’t deal in those terms doesn’t mean I’m weird. So tell these people: I ain’t weird; I’m rational. I’m a person who can choose to write stuff like that, or choose to write stuff that includes all the notes on the piano played at once, followed by a cement truck driving over the piano, followed by a small atomic explosion. Nothing weird about that as long as you do it in a meaningful way.

„Without deviation, progress is not possible.“

„I think it is good that books still exist, but they do make me sleepy.“

„Jazz is not dead, it just smells funny.“

„Anything Anytime Anyplace For No Reason At All (or AAAFNRAA)“

„Music is the only religion that delivers the goods.“

„Information is not knowledge. Knowledge is not wisdom. Wisdom is not truth. Truth is not beauty. Beauty is not love. Love is not music. Music is the best…“

"Packard Goose""Joe's Garage Acts II & III" (1979)Variant: Information is not knowledge. Knowledge is not wisdom. Wisdom is not truth. Truth is not beauty. Beauty is not love. Love is not music. Music is the best.

„If you wind up with a boring, miserable life because you listened to your mom, your dad, your teacher, your priest, or some guy on TV telling you how to do your shit, then YOU DESERVE IT.“

p. 233.Variant: If you end up with a boring miserable life because you listened to your mom, your dad, your teacher, your priest, or some guy on television telling you how to do your shit, then you deserve it.

„Without music to decorate it, time is just a bunch of boring production deadlines or dates by which bills must be paid.“

„If you want to get laid, go to college. If you want an education, go to the library.“

„A drug is not bad. A drug is a chemical compound. The problem comes in when people who take drugs treat them like a license to behave like an asshole.“ 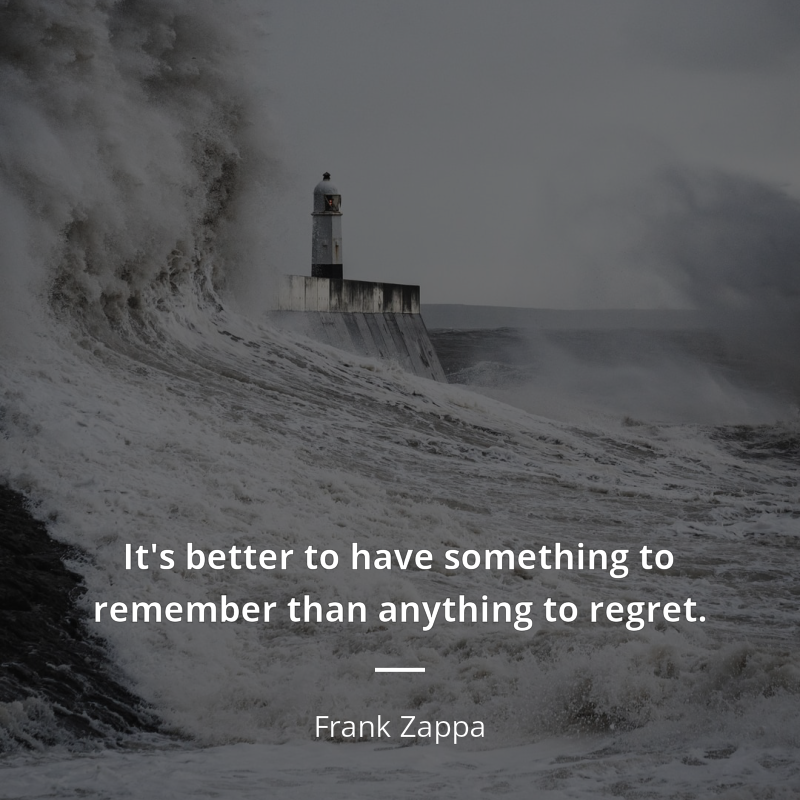 „It's better to have something to remember than anything to regret.“

„So many books, so little time.“

„I never set out to be weird. It was always other people who called me weird.“

Duce and President of the Council of Ministers of Italy. Le… 1883 - 1945
Another 69 today anniversaries