Sir Winston Leonard Spencer-Churchill, was a British statesman, army officer, and writer. He served as Prime Minister of the United Kingdom from 1940 to 1945 and again from 1951 to 1955. As a Member of Parliament , he represented five constituencies over the course of his career. As Prime Minister, Churchill led Britain to victory during the Second World War. He led the Conservative Party for fifteen years from 1940 to 1955.

Churchill was born into an aristocratic family, the son of an English politician and American socialite. Joining the British Army, he saw action in British India, the Anglo–Sudan War, and the Second Boer War, gaining fame as a war correspondent and writing books about his campaigns. Moving into politics, before the First World War, he served as President of the Board of Trade, Home Secretary, and First Lord of the Admiralty as part of Asquith's Liberal government. During the war, Churchill departed from government following the disastrous Gallipoli Campaign. He briefly resumed active army service on the Western Front as a battalion commander in the Royal Scots Fusiliers. He returned to government under Lloyd George as Minister of Munitions, Secretary of State for War, Secretary of State for Air, then Secretary of State for the Colonies. After two years out of Parliament, he served as Chancellor of the Exchequer in Baldwin's Conservative government of 1924–1929, controversially returning the pound sterling in 1925 to the gold standard at its pre-war parity, a move widely seen as creating deflationary pressure on the UK economy.

Out of office during the 1930s, Churchill took the lead in warning about Nazi Germany and in campaigning for rearmament. At the outbreak of the Second World War, he was again appointed First Lord of the Admiralty. Following Neville Chamberlain's resignation in May 1940, Churchill became Prime Minister. His speeches and radio broadcasts helped inspire British resistance, especially during the difficult days of 1940–41 when the British Commonwealth and Empire stood almost alone in its active opposition to Adolf Hitler. He led Britain as Prime Minister until after the German surrender in 1945. After the Conservative Party's defeat in the 1945 general election, he became Leader of the Opposition to the Labour Government. He publicly warned of an "Iron Curtain" of Soviet influence in Europe and promoted European unity. He was re-elected Prime Minister in the 1951 election. His second term was preoccupied by foreign affairs, including the Malayan Emergency, Mau Mau Uprising, Korean War, and a UK-backed Iranian coup. Domestically his government laid great emphasis on house-building. Churchill suffered a serious stroke in 1953 and retired as Prime Minister in 1955, although he remained an MP until 1964. Upon his death, he was given a state funeral.

Named the Greatest Briton of all time in a 2002 poll, Churchill is among the most influential people in British history, consistently ranking well in opinion polls of Prime Ministers of the United Kingdom. As a writer, he won the Nobel Prize in Literature in 1953 for his overall, lifetime body of work. His highly complex legacy continues to stimulate intense debate amongst writers and historians.

A History of the English-Speaking Peoples

The Story of the Malakand Field Force

London to Ladysmith via Pretoria

„Governments create nothing and have nothing to give but what they have first taken away — you may put money in the pockets of one set of Englishmen, but it will be money taken from the pockets of another set of Englishmen, and the greater part will be spilled on the way. Every vote given for Protection is a vote to give Governments the right of robbing Peter to pay Paul and charging the public a handsome commission on the job.“ 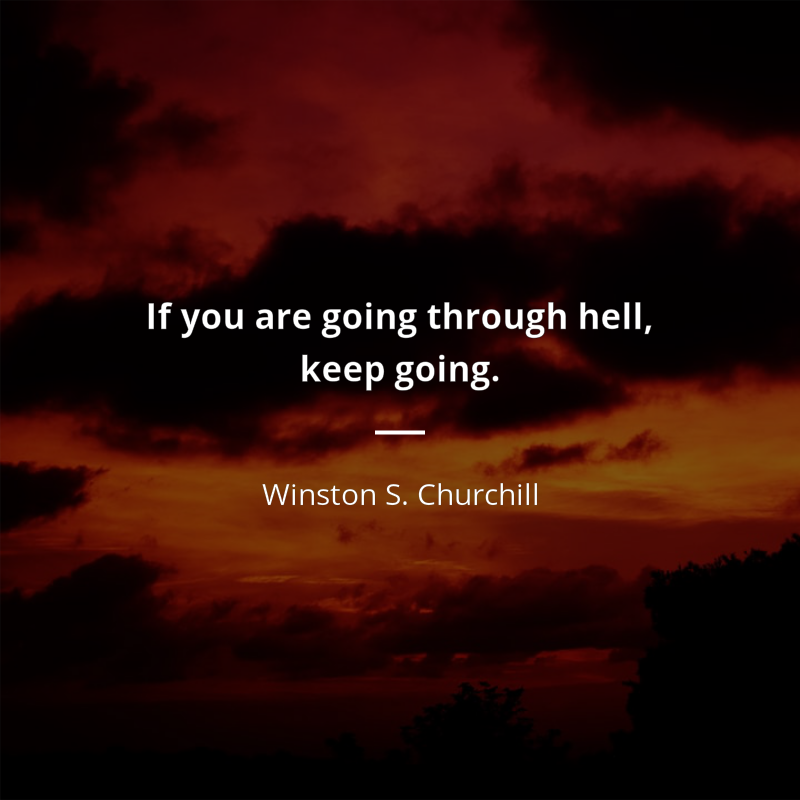 „If you're going through hell, keep going.“

True origin unknown. Finest Hour described it as "not verifiable in any of the 50 million published words by and about him" ( Finest Hour, The Journal of Winston Churchill, Number 145, Winter 2009–10, p. 9 https://www.winstonchurchill.org/images/finesthour/vol.01%20no.145.pdf). A similar quotation: "If you're going through hell, don't stop!" is "plausibly attributed" to Oregon self-help author and counselor Douglas Bloch (1990), according to Quote Investigator.MisattributedVariant: If you're going through hell, keep going Source: http://quoteinvestigator.com/2014/09/14/keep-going/

Speech given at Harrow School, Harrow, England, October 29, 1941. Quoted in Churchill by Himself (2008), ed. Langworth, PublicAffairs, 2008, p. 23The Second World War (1939–1945)Source: Never Give In!: The Best of Winston Churchill's SpeechesContext: Never give in — never, never, never, never, in nothing great or small, large or petty, never give in except to convictions of honour and good sense. Never yield to force; never yield to the apparently overwhelming might of the enemy.

„Occasionally he stumbled over the truth, but hastily picked himself up and hurried on as if nothing had happened.“

On Stanley Baldwin, as cited in Churchill by Himself (2008), Ed. Langworth, PublicAffairs, p. 322 ISBN 1586486381Also quoted by Kay Halle in Irrepressible Churchill: A Treasury of Winston Churchill's Wit http://books.google.com/books?id=b0MTAQAAIAAJ&q=%22Occasionally+he+stumbled+over+the+truth+but+hastily+picked+himself+up+and+hurried+on+as+if+nothing+had+happened%22&pg=PA133#v=onepage (1966).The 1930sVariant: Men occasionally stumble over the truth, but most of them pick themselves up and hurry off as if nothing ever happened.

„Success is not final, failure is not fatal: it is the courage to continue that counts.“

Attributed to Winston Churchill in The Prodigal Project : Book I : Genesis (2003) by Ken Abraham and Daniel Hart, p. 224 and other places, though no source attribution is given. It actually derives from an advertising campaign for Budweiser beer in the late 1930s.MisattributedVariant: Success is not final, failure is not fatal: it is the courage to continue that counts. Source: http://quoteinvestigator.com/2013/09/03/success-final/

„My tastes are simple: I am easily satisfied with the best.“

Variant: I am easily satisfied with the very best.

„History will be kind to me for I intend to write it.“ 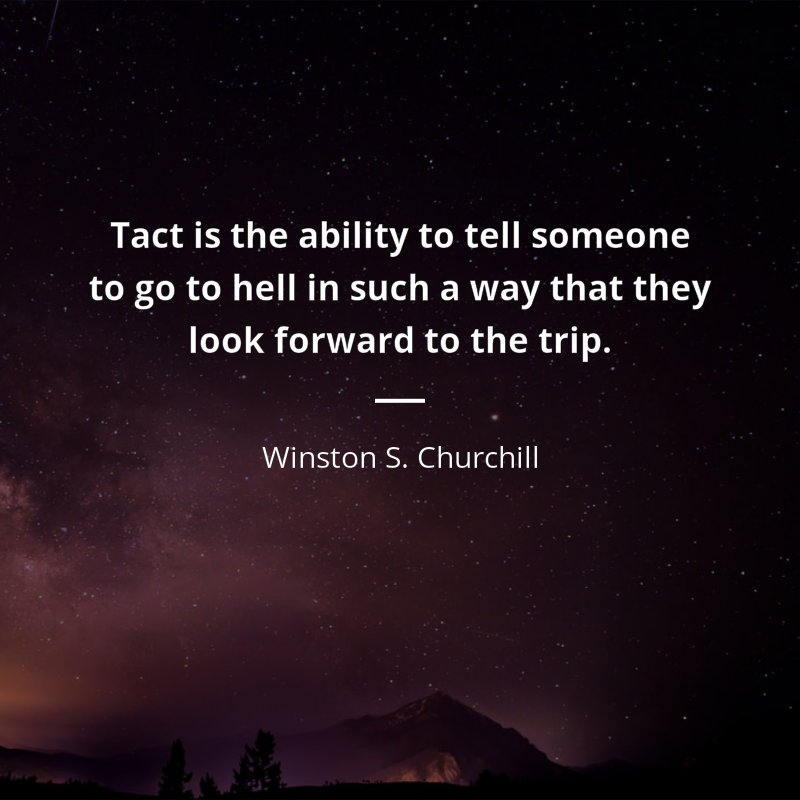 „Tact is the ability to tell someone to go to hell in such a way that they look forward to the trip.“

„I am fond of pigs. Dogs look up to us. Cats look down on us. Pigs treat us as equals.“ 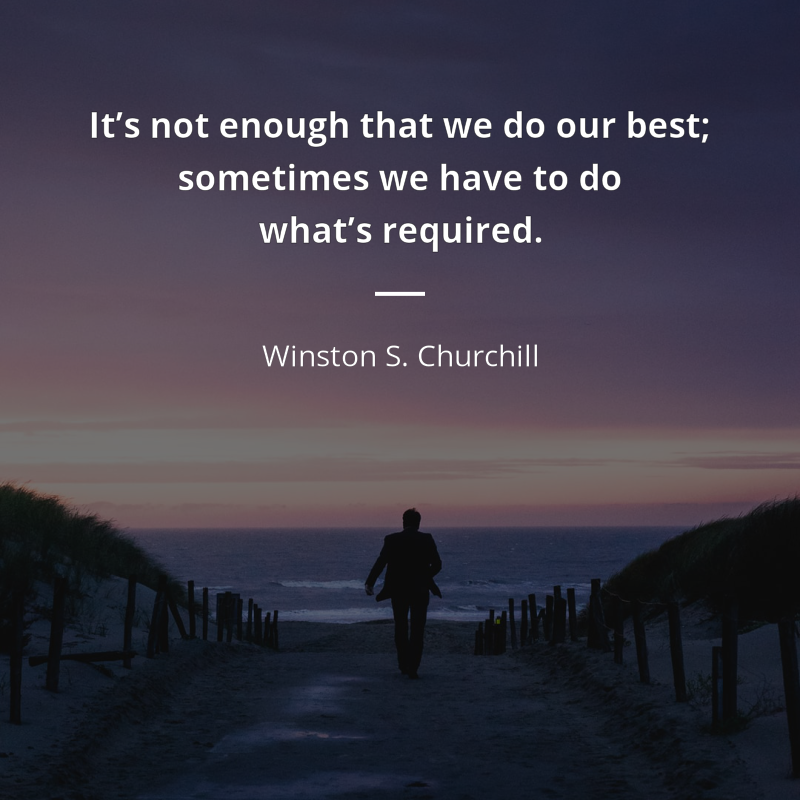 „It’s not enough that we do our best; sometimes we have to do what’s required.“

„Nothing in life is so exhilarating as to be shot at without result.“

The Story of the Malakand Field Force: An Episode of Frontier War (1898), Chapter X.Early career years (1898–1929)Variant: There is nothing more exhilarating than to be shot at with no result.

Attribution debunked in Langworth's Churchill by Himself. First known appearance is in a 1992 usenet post https://groups.google.com/forum/message/raw?msg=rec.arts.comics.misc/EMj3ZowKq1U/E0dsEBwdZEgJ.MisattributedSource: Google books link https://books.google.com/books?id=vbsU21fEhLAC&q=average+voter#v=snippet&q=average%20voter&f=false

„A lady came up to me one day and said 'Sir! You are drunk', to which I replied 'I am drunk today madam, and tomorrow I shall be sober but you will still be ugly.“

„Kites rise highest against the wind, not with it.“

Variant: A kite flies against the wind, not with it.

„For myself I am an optimist - it does not seem to be much use to be anything else.“

„A fanatic is one who can't change his mind and won't change the subject.“

Variant: A fanatic is one who can't change his mind and won't change the subject.

„The greatest lesson in life is to know that even fools are right sometimes.“

„The price of greatness is responsibility.“

Portuguese writer and recipient of the 1998 Nobel Prize in …