She began her career in 1958 as a featured singer with Ike Turner's Kings of Rhythm, first recording under the name "Little Ann." Her introduction to the public as Tina Turner began in 1960 as a member of the Ike & Tina Turner Revue. Success followed with a string of notable hits credited to the duo, including "A Fool in Love", "River Deep – Mountain High" , "Proud Mary" , and "Nutbush City Limits" , a song which she herself wrote. In her autobiography, I, Tina, she revealed several instances of severe domestic abuse against her by Ike Turner prior to their 1976 split and subsequent 1978 divorce. Raised a Baptist, she encountered faith with Nichiren Shoshu Buddhism in 1971, crediting the spiritual chant of Nam Myoho Renge Kyo, which Turner claims helped her to endure during difficult times.

After her divorce from Ike Turner, she rebuilt her career through live performances. In the 1980s, Turner launched a major comeback with another string of hits, starting in late 1983 with the single "Let's Stay Together" followed by the 1984 release of her fifth solo album Private Dancer which became a worldwide success. The album contained the song "What's Love Got to Do with It", which became Turner's biggest hit and won four Grammy Awards including Record of the Year. Her olo success continued throughout the 1980s and 90s with multi-platinum albums including Break Every Rule and Foreign Affair, and with singles such as "We Don't Need Another Hero ", "Typical Male", "The Best", "I Don't Wanna Fight" and "GoldenEye" for the 1995 James Bond film of the same name. In 1993, "What's Love Got to Do with It" was used as the title of a biographical film adapted from her autobiography, along with the film's accompanying soundtrack album. In addition to her musical career, Turner has also garnered success acting in films, including the role of the Acid Queen in the 1975 rock musical Tommy, a starring role alongside Mel Gibson in the 1985 action film Mad Max Beyond Thunderdome, and a cameo role in the 1993 film Last Action Hero.

One of the world's best-selling artists of all time, she has also been referred to as The Queen of Rock 'n' Roll. Turner has been termed the most successful female Rock 'n' Roll artist, receiving eleven Grammy Awards, including eight competitive awards and three Grammy Hall of Fame awards. Turner has also sold more concert tickets than any other solo performer in history. Her combined album and single sales total approximately 180 million copies worldwide, She is noted for her energetic stage presence, powerful vocals, and career longevity. In 2008, Turner returned from semi-retirement to embark on her Tina!: 50th Anniversary Tour. Turner's tour became one of the highest selling ticketed shows of 2008–09. Rolling Stone Magazine ranked Turner no. 63 on their list of 100 greatest artists of all time, and no. 17 on their list of 100 greatest singers of all time. In 1991, Turner was inducted into the Rock and Roll Hall of Fame.

Turner announced in December 2016 that she has been working on Tina, a new musical based on her story, in collaboration with Phyllida Lloyd and Stage Entertainment.

„I am strong. I lived through a divorce, separation from my family. I never let it break me down. I’m not an alcoholic. I’ve never smoked, I’ve never done drugs. I’ve floated through the disaster of my past clean. I arrived here undamaged.“ 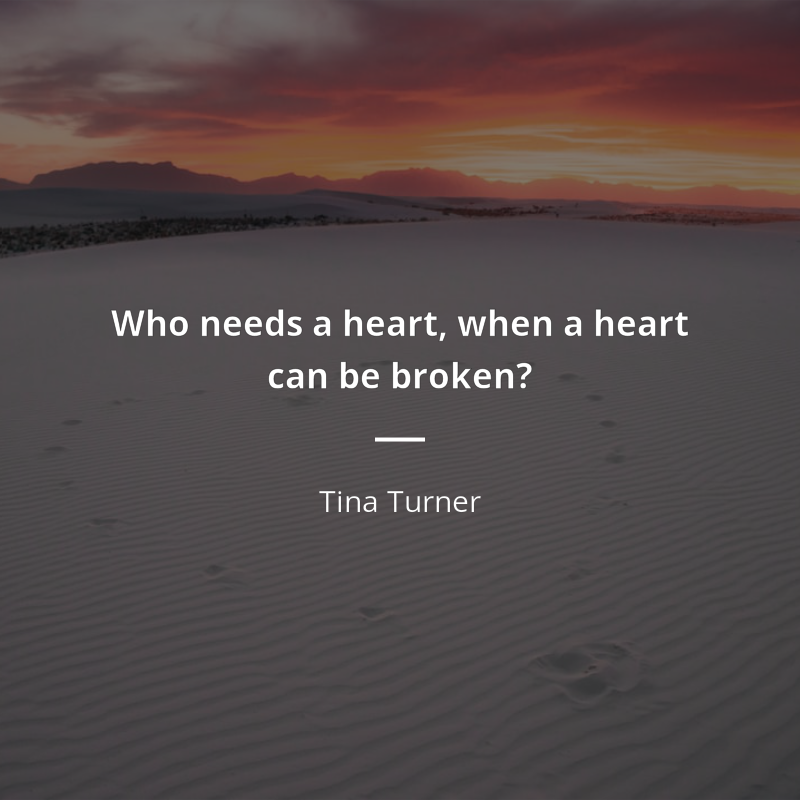 „Who needs a heart, when a heart can be broken?“

"What's Love Got to Do with It" https://www.youtube.com/watch?v=Mh3h9DNHNOM

„We nevah, evah, do nothin’ nice and easy. We always do it nice and rough!“

„I have a simple, childlike view of life, and I want to keep it. That’s why I never got into that Beverly Hills world. So many pretentious people. They just aren’t real.“

„Well, it was a church person in the early days, Mahalia Jackson. And Rosetta Tharpe. These spiritual, very strong voices. I only knew that they were figures in the black race, recognizable and respected. But I must admit, I’ve always covered the songs of males. I haven’t followed up on women or listened to that much women’s music.“

Her answer on the question who her first musical influences were. Mark Bego: Tina Turner: Break Every Rule, 2005, page 18.

„When I think of soul I think of grease ’cause ain’t nothin’ no good without the grease.“

„People often ask me when am I gonna slow down. You know what I tell 'em? I'm just gettin' started.“

Spoken interlude during "Proud Mary", live at The Apollo, Manchester, 14 March 1979 ("On the Road", VHS)Lyrics

lead singer of The Doors