Frederick Mercury was a British singer, songwriter and record producer, best known as the lead vocalist of the rock band Queen. He was known for his flamboyant stage persona and three-octave vocal range. Mercury wrote numerous hits for Queen, including "Bohemian Rhapsody", "Killer Queen", "Somebody to Love", "Don't Stop Me Now", "Crazy Little Thing Called Love", and "We Are the Champions". He led a solo career while performing with Queen, and occasionally served as a producer and guest musician for other artists.

Mercury was born of Parsi descent in the Sultanate of Zanzibar, and grew up there and in India before moving with his family to Middlesex, England, in his teens. He formed Queen in 1970 with guitarist Brian May and drummer Roger Taylor. Mercury died in 1991 at age 45 due to complications from AIDS, having confirmed the day before his death that he had contracted the disease.

In 1992, Mercury was posthumously awarded the Brit Award for Outstanding Contribution to British Music, and a tribute concert was held at Wembley Stadium, London. As a member of Queen, he was inducted into the Rock and Roll Hall of Fame in 2001, the Songwriters Hall of Fame in 2003, and the UK Music Hall of Fame in 2004. In 2002, he was placed number 58 in the BBC's 2002 poll of the 100 Greatest Britons. He is consistently voted one of the greatest singers in the history of popular music.

„Gay as a daffodil.“

On himself, as quoted in Interview by Julie Webb for New Musical Express (12 March 1974) http://www.queenarchives.com/index.php?title=Freddie_Mercury_-_03-12-1974_-_NME; he is often reported to have said "I'm as gay as a daffodil, my dear!" but it does not appear in that form in the article.

„Our love affair ended in tears but a deep bond grew out of it, and that's something nobody can take away from us. It's unreachable“

On his relationship with Mary Austin, as quoted in "Rock On Freddie" (1985).Context: Our love affair ended in tears but a deep bond grew out of it, and that's something nobody can take away from us. It's unreachable … All my lovers ask me why they can't replace her, but it's simply impossible.
I don't feel jealous of her lovers because. of course, she has a life to lead, and so do I. Basically, I try to make sure she's happy with whoever she's with and she tries to do the same for me.
We look after each other and that's a wonderful form of love. I might have all the problems in the world, but I have Mary and that gets me through.

„You can have everything in the world and still be the loneliest man. And that is the most bitter type of loneliness, success has brought me world idolisation and millions of pounds. But it's prevented me from having the one thing we all need: A loving, ongoing relationship.“

As quoted in "Queen's Freddie Mercury Shopping For An Image In London" by Scott Cohen in Circus Magazine (April 1975) http://www.queenarchives.com/index.php?title=Freddie_Mercury_-_04-XX-1975_-_Circus_Magazine.Context: Jimi Hendrix is very important. He's my idol. He sort of epitomizes, from his presentation on stage, the whole works of a rock star. There's no way you can compare him. You either have the magic or you don't. There's no way you can work up to it. There's nobody who can take his place.

„I like people to go away from a Queen show feeling fully entertained, having had a good time.“

"The Man Who Would Be Queen" in Melody Maker (2 May 1981).Context: I like people to go away from a Queen show feeling fully entertained, having had a good time. I think Queen songs are pure escapism, like going to see a good film - after that, they can go away and say that was great, and go back to their problems. I don't want to change the world with our music. There are no hidden messages in our songs, except for some of Brian's.

„Liza, in terms of sheer talent, just oozes with it.“

As quoted in "Queen's Freddie Mercury Shopping For An Image In London" by Scott Cohen in Circus Magazine (April 1975).Context: Liza, in terms of sheer talent, just oozes with it. She has sheer energy and stamina, which she gets across the stage, and the way she delivers herself to the public is a good influence. There is a lot to learn from her

„Can you imagine how terrible it is when you've got everything and you're still desperately lonely? That is awful beyond words.
I'm so powerful on stage that I seem to have created a monster. When I'm performing I'm an extrovert, yet inside I'm a completely different man.“

„This next song is only dedicated to beautiful people here tonight. That means all of you. Thank you for coming along… and making this a great occasion.“

„I just like having fun. It's a very good release, rock music, but you know you say that I am a different person on stage and that same thing could be said of anyone going out to do his job. It's my work, and I'm very serious about it, getting it right - when we began, we approached it the way we did because we were not prepared to be out-of-work musicians, ever. We said either take it on as a serious commodity or don't do it at all.“

„We’re confident people will take to us, because although the camp image has already been established by people like Bowie and Bolan we are taking it to another level.“

On Queen, in "Standing Up For Queen" (28 July 1973) http://www.queenarchives.com/index.php?title=Group_-_07-28-1973_-_Melody_Maker.Context: We’re confident people will take to us, because although the camp image has already been established by people like Bowie and Bolan we are taking it to another level. The concept of Queen is to be regal and majestic. Glamour is part of us and we want to be dandy. We want to shock and be outrageous instantly.

„Led Zeppelin is the greatest. Robert Plant is one of the most original vocalists of our time. As a rock band they deserve the kind of success they're getting.“

As quoted in "Queen's Freddie Mercury Shopping For An Image In London" by Scott Cohen in Circus Magazine (April 1975).

„We’re gonna stay together until we die, I’m sure of it.“

Context: You know something? There's been a lot of rumors lately about a certain band called Queen. The rumors are that... The rumors are that we're gonna split up. What do you think? [audience replies "No!"] [Pointing to his posterior] They're talking from here! [audience replies "Yes"! ] My apologies, but I say what I want. You know what I mean? So forget those rumors. We’re gonna stay together until we die, I’m sure of it. I keep — I must tell you — I keep wanting to leave, but they won’t let me. Also, I suppose we’re not... We're not bad for four aging queens, are we? Really, what do you think?

"Queen: Live at Wembley" (1986), shortly before performing "Who Wants To Live Forever." http://www.youtube.com/watch?v=0GNJ1SQpxFI

From song The Show Must Go On.

Despite the fact that Freddie Mercury is dying, Brian May acknowledges Freddie’s bravery and perseverance, as he is continuing to produce music despite his illness. Mercury recorded this song the year prior to his death. He was barely walking, but continued to show dedication to his music.

„I'm possessed by love — but isn't everybody?“

As quoted in "I am the Champion" by Nick Ferrari in The Sun (19 July 1985) http://www.queenarchives.com/index.php?title=Freddie_Mercury_-_07-19-1985_-_The_Sun.Context: I'm possessed by love — but isn't everybody? Most of my songs are love ballads and things to do with sadness and torture and pain.
In terms of love, you're not in control and I hate that feeling. I seem to write a lot of sad songs because I'm a very tragic person. But there's always an element of humour at the end.

„Montserrat Caballé is sensational. She has that same kind of emotion as Aretha Franklin. The way she delivers a song is so very natural. It's a very different gift.“

„It all began with the three wise men, followed a star took them to Bethelehem, and made it heard throughout the land — born was the leader of man. All going down to see the Lord Jesus.“ 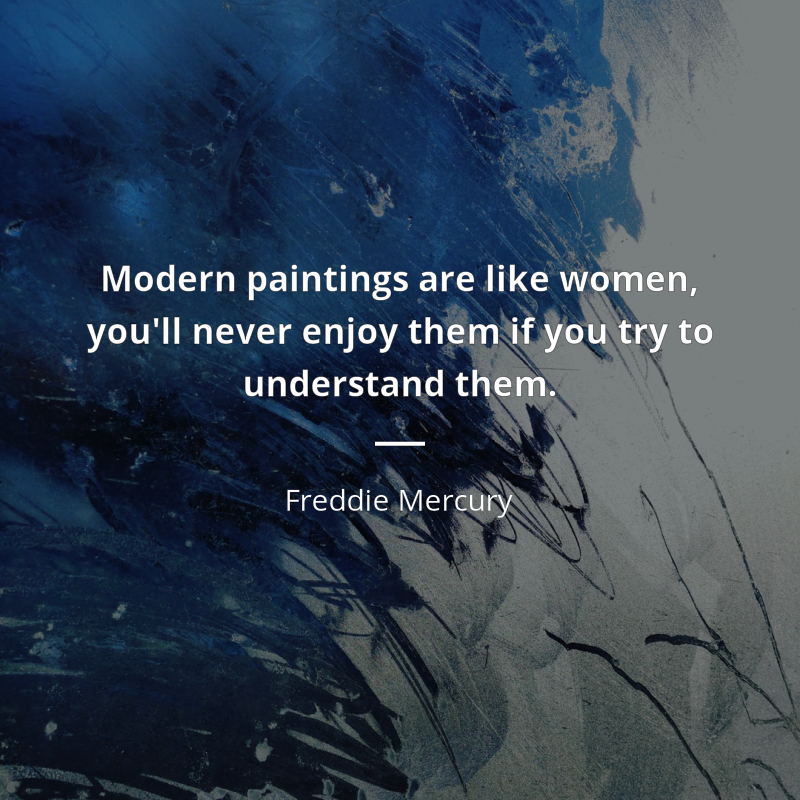 „Modern paintings are like women, you'll never enjoy them if you try to understand them. “

„I can’t win. Love is Russian roulette for me. No one loves the real me inside. they're all in love with my fame, my stardom.
I fall in love far too quickly and end up getting hurt all the time. I've got scars all over. But I can't help myself because basically I'm a softie I have this hard, macho shell — which I project on stage but there's a much softer side. too, which melts like butter.“

„Following the enormous conjecture in the press over the last two weeks, I wish to confirm that I have been tested HIV positive and have AIDS. I felt it correct to keep this information private to date to protect the privacy of those around me. However, the time has come now for my friends and fans around the world to know the truth and I hope that everyone will join with my doctors and all those worldwide in the fight against this terrible disease. My privacy has always been very special to me and I am famous for my lack of interviews. Please understand this policy will continue.“

Statement to the press (23 November 1991), the day before his death, as quoted at The Biography Channel http://www.thebiographychannel.co.uk/biography_story/338:294/1/Freddie_Mercury.htm.

„I hate pockets in trousers … By the way, I do not wear a hose. My hose is my own. No coke bottle, nothing stuffed down there.“