Ernesto "Che" Guevara was an Argentine Marxist revolutionary, physician, author, guerrilla leader, diplomat, and military theorist. A major figure of the Cuban Revolution, his stylized visage has become a ubiquitous countercultural symbol of rebellion and global insignia in popular culture.As a young medical student, Guevara traveled throughout South America and was radicalized by the poverty, hunger, and disease he witnessed. His burgeoning desire to help overturn what he saw as the capitalist exploitation of Latin America by the United States prompted his involvement in Guatemala's social reforms under President Jacobo Árbenz, whose eventual CIA-assisted overthrow at the behest of the United Fruit Company solidified Guevara's political ideology. Later in Mexico City, Guevara met Raúl and Fidel Castro, joined their 26th of July Movement, and sailed to Cuba aboard the yacht Granma with the intention of overthrowing U.S.-backed Cuban dictator Fulgencio Batista. Guevara soon rose to prominence among the insurgents, was promoted to second in command and played a pivotal role in the victorious two-year guerrilla campaign that deposed the Batista regime.Following the Cuban Revolution, Guevara performed a number of key roles in the new government. These included reviewing the appeals and firing squads for those convicted as war criminals during the revolutionary tribunals, instituting agrarian land reform as minister of industries, helping spearhead a successful nationwide literacy campaign, serving as both national bank president and instructional director for Cuba's armed forces, and traversing the globe as a diplomat on behalf of Cuban socialism. Such positions also allowed him to play a central role in training the militia forces who repelled the Bay of Pigs Invasion, and bringing Soviet nuclear-armed ballistic missiles to Cuba, which preceded the 1962 Cuban Missile Crisis. Additionally, Guevara was a prolific writer and diarist, composing a seminal manual on guerrilla warfare, along with a best-selling memoir about his youthful continental motorcycle journey. His experiences and studying of Marxism–Leninism led him to posit that the Third World's underdevelopment and dependence was an intrinsic result of imperialism, neocolonialism and monopoly capitalism, with the only remedy being proletarian internationalism and world revolution. Guevara left Cuba in 1965 to foment revolution abroad, first unsuccessfully in Congo-Kinshasa and later in Bolivia, where he was captured by CIA-assisted Bolivian forces and summarily executed.Guevara remains both a revered and reviled historical figure, polarized in the collective imagination in a multitude of biographies, memoirs, essays, documentaries, songs, and films. As a result of his perceived martyrdom, poetic invocations for class struggle, and desire to create the consciousness of a "new man" driven by moral rather than material incentives, Guevara has evolved into a quintessential icon of various leftist movements. His critics note that he murdered political opponents, eliminated the free press, and put homosexuals in forced labor camps. Time magazine named him one of the 100 most influential people of the 20th century, while an Alberto Korda photograph of him, titled Guerrillero Heroico , was cited by the Maryland Institute College of Art as "the most famous photograph in the world". Wikipedia

„I would rather die standing up to live life on my knees.“

„Our task is to prevent the present generation, torn asunder by its conflicts, from becoming perverted and from perverting new generations.“

Man and Socialism in Cuba (1965)Context: Our task is to prevent the present generation, torn asunder by its conflicts, from becoming perverted and from perverting new generations. We must not bring into being either docile servants of official thought or scholarship students who live at the expense of the state — practising "freedom." Already there are revolutionaries coming who will sing the song of the new man in the true voice of the people. This is a process, which takes time.

Address to the United Nations (1964)Context: Those who kill their own children and discriminate daily against them because of the color of their skin; those who let the murderers of blacks remain free, protecting them, and furthermore punishing the black population because they demand their legitimate rights as free men — how can those who do this consider themselves guardians of freedom? The government of the United States is not the champion of freedom, but rather the perpetrator of exploitation and oppression against the peoples of the world and against a large part of its own population.

„The Cuban Revolution takes up Marx at the point where he himself left science to shoulder his revolutionary rifle.“

Notes on the Cuban Revolution (1960)Context: The Cuban Revolution takes up Marx at the point where he himself left science to shoulder his revolutionary rifle. And it takes him up at that point, not in a revisionist spirit, of struggling against that which follows Marx, of reviving "pure" Marx, but simply because up to that point Marx, the scientist, placed himself outside of the history he studied and predicted. From then on Marx, the revolutionary, could fight within history.

„Grow up as good revolutionaries. Study hard to be able to dominate the techniques that permit the domination of nature. Remember that the Revolution is what is important and that each of us, on our own, is worthless.“

„Now you have the privilege of living in another era and you must be worthy of it.“

Birthday Letter to his Daughter (1966)Context: You should fight to be among the best in school. The very best in every sense and you already know what that means; study and revolutionary attitude. In other words: good conduct, seriousness, love for the revolution, comradeship. I was not that way at your age but I lived in a different society, where man was an enemy of man. Now you have the privilege of living in another era and you must be worthy of it.

„The first duty of a revolutionary is to be educated.“

„Every day People straighten up the hair, why not the heart?“

„Be realistic, demand the impossible!“ 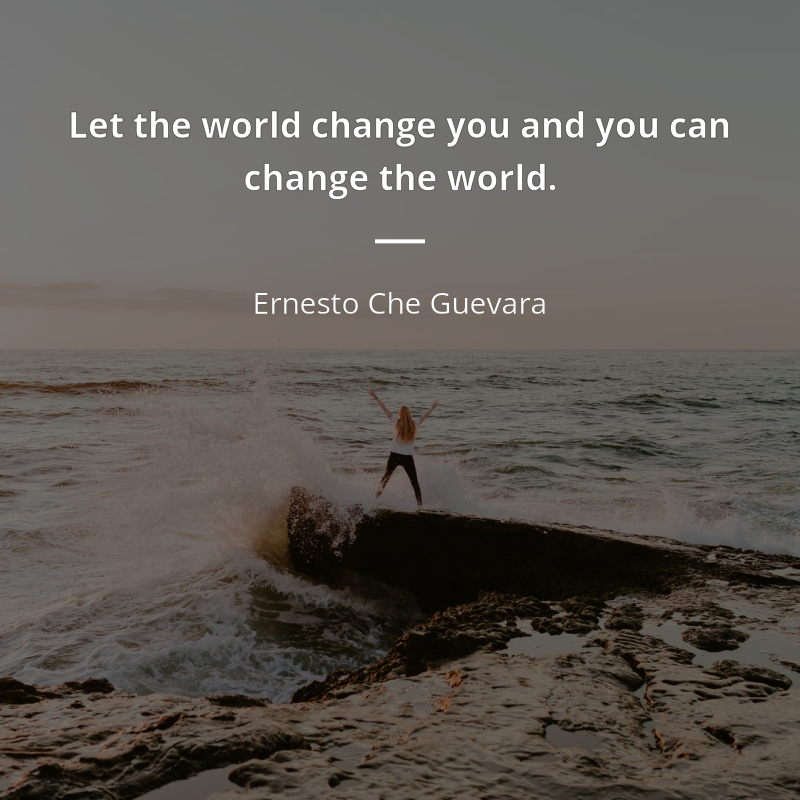 „Let the world change you and you can change the world“

„If you tremble with indignation at every injustice, then you are a comrade of mine.“

As quoted in The Quotable Rebel : Political Quotations for Dangerous Times (2005) by Teishan Latner, p. 112Variant: If you tremble indignation at every injustice then you are a comrade of mine.

„I don't care if I fall as long as someone else picks up my gun and keeps on shooting.“

Variant: I don't care if I fall as long as someone else picks up my gun and keeps on shooting.

„The revolution is not an apple that falls when it is ripe. You have to make it fall.“

„We cannot be sure of having something to live for unless we are willing to die for it.“

„Many will call me an adventurer, and that I am… only one of a different sort: one who risks his skin to prove his truths.“

„The merit of Marx is that he suddenly produces a qualitative change in the history of social thought.“

Notes on the Cuban Revolution (1960)Context: The merit of Marx is that he suddenly produces a qualitative change in the history of social thought. He interprets history, understands its dynamic, predicts the future, but in addition to predicting it (which would satisfy his scientific obligation), he expresses a revolutionary concept: the world must not only be interpreted, it must be transformed. Man ceases to be the slave and tool of his environment and converts himself into the architect of his own destiny.

„Wherever death may surprise us, let it be welcome, provided that this, our battle cry, may have reached some receptive ear“

Message to the Tricontinental (1967)Context: Wherever death may surprise us, let it be welcome, provided that this, our battle cry, may have reached some receptive ear and another hand may be extended to wield our weapons and other men be ready to intone the funeral dirge with the staccato singing of the machine-guns and new battle cries of war and victory.

„My Marxism has taken root and become purified. I believe in armed struggle as the only solution for those peoples who fight to free themselves, and I am consistent with my beliefs.“

„Now is the time to throw off the yoke, to force renegotiation of oppressive foreign debts“

Afro-Asian Conference (1965)Context: Now is the time to throw off the yoke, to force renegotiation of oppressive foreign debts, and to force the imperialists to abandon their bases of aggression.