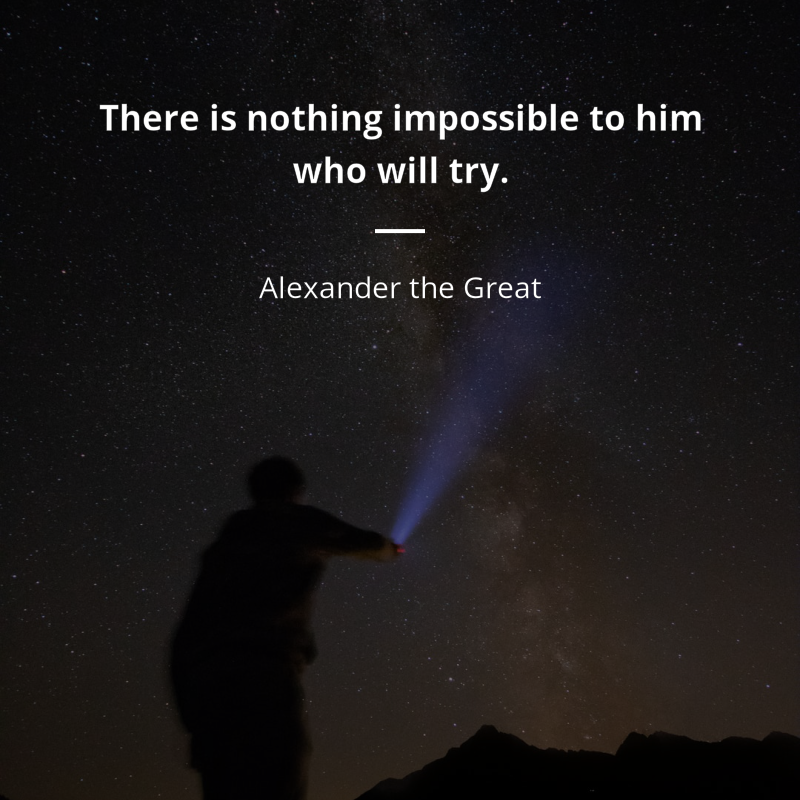 „There is nothing impossible to him who will try.“

On taking charge of an attack on a fortress, in Pushing to the Front, or, Success under Difficulties : A Book of Inspiration (1896) by Orison Swett Marden, p. 55

„So would I, if I were Parmenion.“

„A king does not kill messengers.“

As quoted in the Historia Alexandri Magni of Pseudo-Kallisthenes, 1.37.9-13Kontekst: Now you fear punishment and beg for your lives, so I will let you free, if not for any other reason so that you can see the difference between a Greek king and a barbarian tyrant, so do not expect to suffer any harm from me. A king does not kill messengers.

As quoted in the Historia Alexandri Magni of Pseudo-Kallisthenes, 1.15.1-4

„Holy shadows of the dead, I’m not to blame for your cruel and bitter fate, but the accursed rivalry which brought sister nations and brother people, to fight one another. I do not feel happy for this victory of mine. On the contrary, I would be glad, brothers, if I had all of you standing here next to me, since we are united by the same language, the same blood and the same visions.“

Addressing the dead Hellenes (the Athenean and Thebean Greeks) of the Battle of Chaeronea, as quoted in Historiae Alexandri Magni by Quintus Curtius Rufus

„Our enemies are Medes and Persians, men who for centuries have lived soft and luxurious lives; we of Macedon for generations past have been trained in the hard school of danger and war.“

Addressing his troops prior to the Battle of Issus, as quoted in Anabasis Alexandri by Arrian Book II, 7Kontekst: Our enemies are Medes and Persians, men who for centuries have lived soft and luxurious lives; we of Macedon for generations past have been trained in the hard school of danger and war. Above all, we are free men, and they are slaves. There are Greek troops, to be sure, in Persian service — but how different is their cause from ours! They will be fighting for pay — and not much of at that; we, on the contrary, shall fight for Greece, and our hearts will be in it. As for our foreign troops — Thracians, Paeonians, Illyrians, Agrianes — they are the best and stoutest soldiers in Europe, and they will find as their opponents the slackest and softest of the tribes of Asia. And what, finally, of the two men in supreme command? You have Alexander, they — Darius!

„If I were not Alexander, I should wish to be Diogenes.“

After Diogenes of Sinope who was lying in the sun, responded to a query by Alexander asking if he could do anything for him with a reply requesting that he stop blocking his sunlight. As quoted in "On the Fortune of Alexander" by Plutarch, 332 a-b

„If it were not my purpose to combine barbarian things with things Hellenic, to traverse and civilize every continent, to search out the uttermost parts of land and sea, to push the bounds of Macedonia to the farthest Ocean, and to disseminate and shower the blessings of the Hellenic justice and peace over every nation, I should not be content to sit quietly in the luxury of idle power, but I should emulate the frugality of Diogenes. But as things are, forgive me Diogenes, that I imitate Herakles, and emulate Perseus, and follow in the footsteps of Dionysos, the divine author and progenitor of my family, and desire that victorious Hellenes should dance again in India and revive the memory of the Bacchic revels among the savage mountain tribes beyond the Kaukasos…“

As quoted in "On the Fortune of Alexander" by Plutarch, 332 a-b