René Karl Wilhelm Johann Josef Maria Rilke , better known as Rainer Maria Rilke , was a Bohemian-Austrian poet and novelist. He is "widely recognized as one of the most lyrically intense German-language poets". He wrote both verse and highly lyrical prose. Several critics have described Rilke's work as "mystical". His writings include one novel, several collections of poetry and several volumes of correspondence in which he invokes images that focus on the difficulty of communion with the ineffable in an age of disbelief, solitude and anxiety. These themes position him as a transitional figure between traditional and modernist writers.

Rilke travelled extensively throughout Europe and, in his later years, settled in Switzerland — settings that were key to the genesis and inspiration for many of his poems. While Rilke is most known for his contributions to German literature, over 400 poems were originally written in French and dedicated to the canton of Valais in Switzerland. Among English-language readers, his best-known works include the poetry collections Duino Elegies and Sonnets to Orpheus , the semi-autobiographical novel The Notebooks of Malte Laurids Brigge , and a collection of ten letters that was published after his death under the title Letters to a Young Poet . In the later 20th century, his work found new audiences through use by New Age theologians and self-help authors and frequent quotations by television programs, books and motion pictures. In the United States, Rilke remains among the more popular, best-selling poets. Wikipedia

Letters to a Young Poet

The Book of Images

The Notebooks of Malte Laurids Brigge

The Book of Hours

„Love consists of this: two solitudes that meet, protect and greet each other.“

„And now we welcome the new year, full of things that have never been“

„Believe in a love that is being stored up for you like an inheritance, and have faith that in this love there is a strength and a blessing so large that you can travel as far as you wish without having to step outside it.“

„Have patience with everything that remains unsolved in your heart.
… live in the question.“

„Don't be too quick to draw conclusions from what happens to you; simply let it happen. Otherwise it will be too easy for you to look with blame… at your past, which naturally has a share with everything that now meets you.“

„Let everything happen to you: beauty and terror. Just keep going. No feeling is final.“

from poem Go to the Limits of Your Longing.

Appears in movie Jojo Rabbit. Variant: Let everything happen to you
Beauty and terror
Just keep going
No feeling is final

„No experience has been too unimportant, and the smallest event unfolds like a fate, and fate itself is like a wonderful, wide fabric in which every thread is guided by an infinitely tender hand and laid alongside another thread and is held and supported by a hundred others.“

„Where something becomes extremely difficult and unbearable, there we also stand already quite near its transformation.“

„Our heart always transcends us.“

„I want to be with those who know secret things or else alone.“

„Perhaps all the dragons in our lives are princesses who are only waiting to see us act, just once, with beauty and courage. Perhaps everything that frightens us is, in its deepest essence, something helpless that wants our love.“

„We need, in love, to practice only this: letting each other go. For holding on comes easily; we do not need to learn it.“

Source: Translations from the Poetry of Rainer Maria Rilke

„For one human being to love another: that is perhaps the most difficult of all our tasks, the ultimate, the last test and proof, the work for which all other work is but preparation.“ 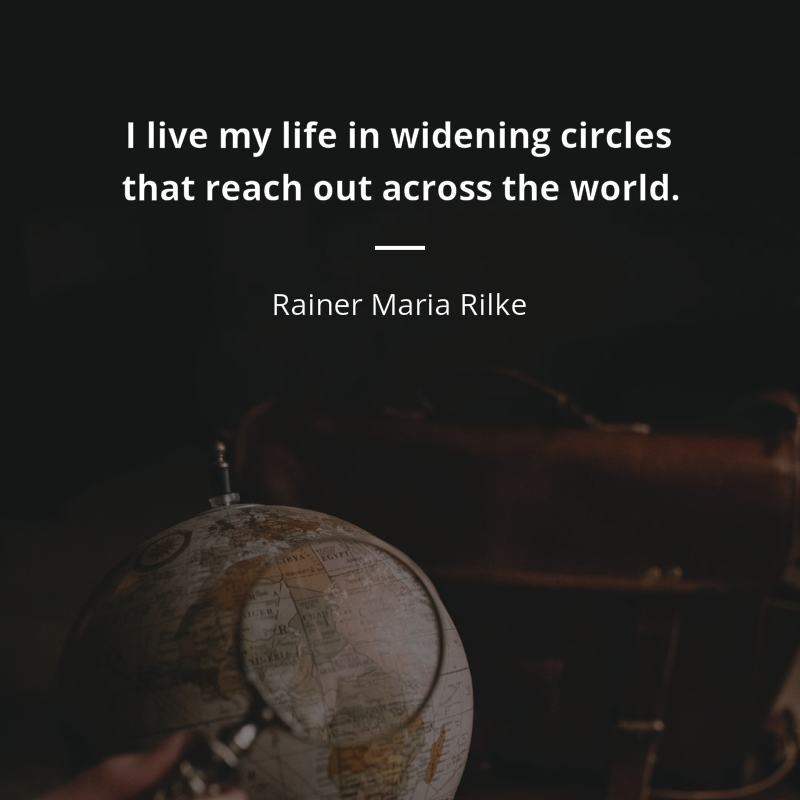 „I live my life in widening circles that reach out across the world.“

„Find out the reason that commands you to write; see whether it has spread its roots into the very depth of your heart; confess to yourself you would have to die if you were forbidden to write.“

Letter One (17 February 1903) Letters to a Young Poet (1934) Context: No one can advise or help you — no one. There is only one thing you should do. Go into yourself. Find out the reason that commands you to write; see whether it has spread its roots into the very depths of your heart; confess to yourself whether you would have to die if you were forbidden to write.

„The work of the eyes is done. Go now and do the heart-work on the images imprisoned within you.“

„The purpose of life is to be defeated by greater and greater things.“

„only someone who is ready for everything, who doesn't exclude any experience, even the most incomprehensible, will live the relationship with another person as something alive and will himself sound the depths of his own being.“

„For beauty is nothing but the beginning of terror
which we are barely able to endure, and it amazes us so,
because it serenely disdains to destroy us.
Every angel is terrible.“

First Elegy (as translated by Stephen Mitchell) Source: Duino Elegies (1922) Context: Who, if I cried out, would hear me among the angels'
hierarchies? and even if one of them
pressed me against his heart: I would be consumed
in that overwhelming existence. For beauty is nothing
but the beginning of terror, which we still are just able to endure,
and we are so awed because it serenely disdains
to annihilate us. Every angel is terrifying.

„The only journey is the one within.“

Austrian neurologist known as the founding father of psycho…

Austrian and British economist and Nobel Prize for Economic…