Rudolf Joseph Lorenz Steiner was an Austrian philosopher, social reformer, architect, economist, esotericist, and claimed clairvoyant. Steiner gained initial recognition at the end of the nineteenth century as a literary critic and published philosophical works including The Philosophy of Freedom. At the beginning of the twentieth century he founded an esoteric spiritual movement, anthroposophy, with roots in German idealist philosophy and theosophy; other influences include Goethean science and Rosicrucianism.In the first, more philosophically oriented phase of this movement, Steiner attempted to find a synthesis between science and spirituality. His philosophical work of these years, which he termed "spiritual science", sought to apply the clarity of thinking characteristic of Western philosophy to spiritual questions, differentiating this approach from what he considered to be vaguer approaches to mysticism. In a second phase, beginning around 1907, he began working collaboratively in a variety of artistic media, including drama, the movement arts and architecture, culminating in the building of the Goetheanum, a cultural centre to house all the arts. In the third phase of his work, beginning after World War I, Steiner worked to establish various practical endeavors, including Waldorf education, biodynamic agriculture, and anthroposophical medicine.Steiner advocated a form of ethical individualism, to which he later brought a more explicitly spiritual approach. He based his epistemology on Johann Wolfgang Goethe's world view, in which "Thinking… is no more and no less an organ of perception than the eye or ear. Just as the eye perceives colours and the ear sounds, so thinking perceives ideas." A consistent thread that runs from his earliest philosophical phase through his later spiritual orientation is the goal of demonstrating that there are no essential limits to human knowledge.

„Live through deeds of love, and let others live with tolerance for their unique intentions.“

„To truly know the world, look deeply within your own being; to truly know yourself, take real interest in the world.“

„You will not be good teachers if you focus only on what you do and not upon who you are.“ 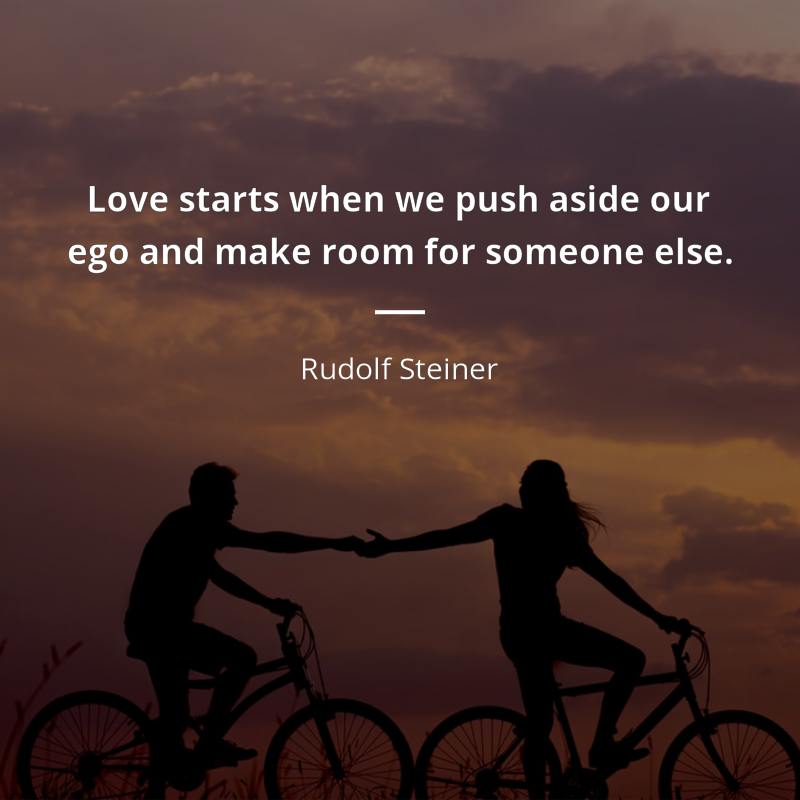 „Love starts when we push aside our ego and make room for someone else.“

„The art is eternal, their shapes are changing.“

„Truth is a free creation of the human spirit, that never would exist at all if we did not generate it ourselves. The task of understanding is not to replicate in conceptual form something that already exists, but rather to create a wholly new realm, that together with the world given to our senses constitutes the fullness of reality.“

„Each individual is a species unto him/herself.“

Theosophy: An Introduction to the Spiritual Processes in Human Life and in the Cosmos (1904)

„In order to approach a creation as sublime as the Bhagavad-Gita with full understanding it is necessary to attune our soul to it.“

„The time has come to realize that supersensible knowledge has now to arise from the materialistic grave.“

„Goethe's thinking was mobile. It followed the whole growth process of the plant and followed how one plant form is a modification of the other. Goethe's thinking was not rigid with inflexible contours; it was a thinking in which the concepts continually metamorphose. Thereby his concepts became, if I may put it this way, intimately adapted to the process that plant nature itself goes through.“

„The fundamental maxim of free men is to live in love towards our actions, and to let live in the understanding of the other person's will.“

„We shall not set up demands nor programmes, but simply describe the child-nature. (…) Vague and general phrases — ‘the harmonious development of all the powers and talents in the child,’ and so forth — cannot provide the basis for a genuine art of education. Such an art of education can only be built up on a real knowledge of the human being. Not that these phrases are incorrect, but that at bottom they are as useless as it would be to say of a machine that all its parts must be brought harmoniously into action. To work a machine you must approach it, not with phrases and truisms, but with real and detailed knowledge.“

„Those who judge human beings according to generic characteristics only reach the boundary, beyond which people begin to be beings whose activity is based on free self-determination…. Characteristics of race, tribe, ethnic group and gender are subjects for special sciences…. But all these sciences cannot penetrate through to the special nature of the individual. Where the realm of freedom of thought and action begin, the determination of individuals according to generic laws ends.“

„Ethical individualism… is spiritualized theory of evolution carried over into moral life.“

„Because of their very nature, science and logical thinking can never decide what is possible or impossible. Their only function is to explain what has been ascertained by experience and observation.“

„You have no idea how unimportant is all that the teacher says or does not say on the surface, and how important what he himself is as teacher.“

„Only to the extent that a man has emancipated himself…from all that is generic, does he count as a free spirit within a human community. No man is all genus, none is all individuality.“