Nikola Tesla was a Serbian-American inventor, electrical engineer, mechanical engineer, and futurist who is best known for his contributions to the design of the modern alternating current electricity supply system.Born and raised in the Austrian Empire, Tesla studied engineering and physics in the 1870s without receiving a degree, and gained practical experience in the early 1880s working in telephony and at Continental Edison in the new electric power industry. He emigrated in 1884 to the United States, where he became a naturalized citizen. He worked for a short time at the Edison Machine Works in New York City before he struck out on his own. With the help of partners to finance and market his ideas, Tesla set up laboratories and companies in New York to develop a range of electrical and mechanical devices. His alternating current induction motor and related polyphase AC patents, licensed by Westinghouse Electric in 1888, earned him a considerable amount of money and became the cornerstone of the polyphase system which that company eventually marketed.

Attempting to develop inventions he could patent and market, Tesla conducted a range of experiments with mechanical oscillators/generators, electrical discharge tubes, and early X-ray imaging. He also built a wireless-controlled boat, one of the first ever exhibited. Tesla became well known as an inventor and demonstrated his achievements to celebrities and wealthy patrons at his lab, and was noted for his showmanship at public lectures. Throughout the 1890s, Tesla pursued his ideas for wireless lighting and worldwide wireless electric power distribution in his high-voltage, high-frequency power experiments in New York and Colorado Springs. In 1893, he made pronouncements on the possibility of wireless communication with his devices. Tesla tried to put these ideas to practical use in his unfinished Wardenclyffe Tower project, an intercontinental wireless communication and power transmitter, but ran out of funding before he could complete it.After Wardenclyffe, Tesla experimented with a series of inventions in the 1910s and 1920s with varying degrees of success. Having spent most of his money, Tesla lived in a series of New York hotels, leaving behind unpaid bills. He died in New York City in January 1943. Tesla's work fell into relative obscurity following his death, until 1960, when the General Conference on Weights and Measures named the SI unit of magnetic flux density the tesla in his honor. There has been a resurgence in popular interest in Tesla since the 1990s.

My Inventions: The Autobiography of Nikola Tesla

„Of all things, I liked books best.“

„What one man calls God, another calls the laws of physics.“

„I do not think you can name many great inventions that have been made by married men.“

„The present is theirs; the future, for which I really worked, is mine.“ 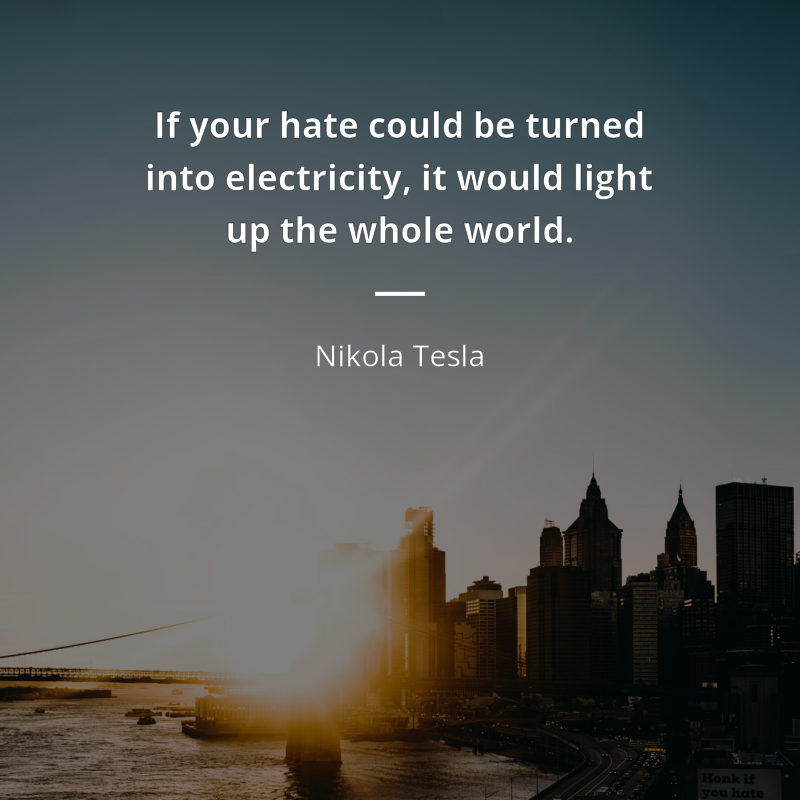 „If your hate could be turned into electricity, it would light up the whole world.“

„If you want to find the secrets of the universe, think in terms of energy, frequency and vibration.“

First attibution is to Ralph Bergstresser who claims to have heard this from Tesla in a conversation "following an experience with the Maharaja's son".DisputedSource: Coments From The Inventor of the Purple Harmony Plates http://www.bibliotecapleyades.net/ciencia/esp_ciencia_universalenergy02.htm,

„The gift of mental power comes from God, Divine Being, and if we concentrate our minds on that truth, we become in tune with this great power. My Mother had taught me to seek all truth in the Bible.“

„Money does not represent such a value as men have placed upon it. All my money has been invested into experiments with which I have made new discoveries enabling mankind to have a little easier life.“

As quoted in "A Visit to Nikola Tesla" by Dragislav L. Petković in Politika (April 1927); also in Tesla, Master of Lightning (1999) by Margaret Cheney, Robert Uth, and Jim Glenn, p. 82

„I do not think there is any thrill that can go through the human heart like that felt by the inventor as he sees some creation of the brain unfolding to success … Such emotions make a man forget food, sleep, friends, love, everything.“

„Today's scientists have substituted mathematics for experiments, and they wander off through equation after equation, and eventually build a structure which has no relation to reality.“

„One must be sane to think clearly, but one can think deeply and be quite insane.“

„Everyone should consider his
body as a priceless gift from
one whom he loves above all, a
marvelous work of art, of
indescribable beauty, and
mystery beyond human conception, and so delicate that
a word, a breath, a look, nay, a
thought may injure it.“

„We crave for new sensations but soon become indifferent to them. The wonders of yesterday are today common occurrences.“

„Life is and will ever remain an equation incapable of solution, but it contains certain known factors.“

„All that was great in the past was ridiculed, condemned, combated, suppressed — only to emerge all the more powerfully, all the more triumphantly from the struggle.“

A Means for Furthering Peace (1905)Context: It is not a dream, it is a simple feat of scientific electrical engineering, only expensive — blind, faint-hearted, doubting world!... Humanity is not yet sufficiently advanced to be willingly led by the discover's keen searching sense. But who knows? Perhaps it is better in this present world of ours that a revolutionary idea or invention instead of being helped and patted, be hampered and ill-treated in its adolescence — by want of means, by selfish interest, pedantry, stupidity and ignorance; that it be attacked and stifled; that it pass through bitter trials and tribulations, through the heartless strife of commercial existence. So do we get our light. So all that was great in the past was ridiculed, condemned, combated, suppressed — only to emerge all the more powerfully, all the more triumphantly from the struggle.

„Let the future tell the truth and evaluate each one according to his work and accomplishments. The present is theirs; the future, for which I really worked, is mine.“

„Our virtues and our failings are inseparable, like force and matter. When they separate, man is no more.“