Neil Alden Armstrong was an American astronaut and aeronautical engineer and the first person to walk on the Moon. He was also a naval aviator, test pilot, and university professor.

A graduate of Purdue University, Armstrong studied aeronautical engineering; his college tuition was paid for by the U.S. Navy under the Holloway Plan. He became a midshipman in 1949 and a naval aviator the following year. He saw action in the Korean War, flying the Grumman F9F Panther from the aircraft carrier USS Essex. In September 1951, while making a low bombing run, Armstrong's aircraft was damaged when it collided with an anti-aircraft cable which cut off a large portion of one wing. Armstrong was forced to bail out. After the war, he completed his bachelor's degree at Purdue and became a test pilot at the National Advisory Committee for Aeronautics High-Speed Flight Station at Edwards Air Force Base in California. He was the project pilot on Century Series fighters and flew the North American X-15 seven times. He was also a participant in the U.S. Air Force's Man in Space Soonest and X-20 Dyna-Soar human spaceflight programs.

Armstrong joined the NASA Astronaut Corps in the second group, which was selected in 1962. He made his first spaceflight as command pilot of Gemini 8 in March 1966, becoming NASA's first civilian astronaut to fly in space. During this mission with pilot David Scott, he performed the first docking of two spacecraft; the mission was aborted after Armstrong used some of his re-entry control fuel to stabilize a dangerous roll caused by a stuck thruster. During training for Armstrong's second and last spaceflight as commander of Apollo 11, he had to eject from the Lunar Landing Research Vehicle moments before a crash.

On July 20, 1969, Armstrong and Apollo 11 Lunar Module pilot Buzz Aldrin became the first people to land on the Moon, and the next day they spent two and a half hours outside the spacecraft while Michael Collins remained in lunar orbit in the mission's command module . When Armstrong stepped onto the lunar surface, he famously said: "That's one small step for [a] man, one giant leap for mankind." Along with Collins and Aldrin, Armstrong was awarded the Presidential Medal of Freedom by President Richard Nixon. President Jimmy Carter presented Armstrong with the Congressional Space Medal of Honor in 1978, and Armstrong and his former crewmates received a Congressional Gold Medal in 2009.

After he resigned from NASA in 1971, Armstrong taught in the Department of Aerospace Engineering at the University of Cincinnati until 1979. He served on the Apollo 13 accident investigation and on the Rogers Commission, which investigated the Space Shuttle Challenger disaster. He acted as a spokesman for several businesses and appeared in advertising for the automotive brand Chrysler starting in January 1979. Wikipedia 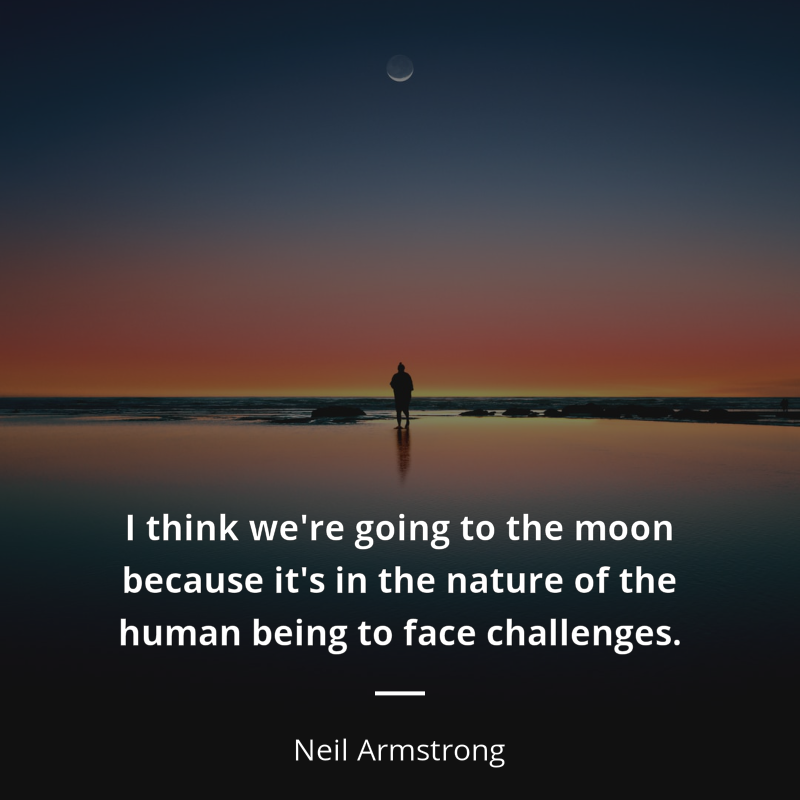 „I think we're going to the moon because it's in the nature of the human being to face challenges.“

„That's one small step for [a] man, one giant leap for mankind.“

Words said when Armstrong first stepped onto the Moon (20 July 1969) One Small Step, transcript of Apollo 11 Moon landing https://www.hq.nasa.gov/alsj/a11.step.html. In the actual sound recordings he apparently fails to say "a" before "man" and says: "That's one small step for man, one giant leap for mankind." This was generally considered by many to simply be an error of omission on his part. Armstrong long insisted he did say "a man" but that it was inaudible. Prior to new evidence supporting his claim, he stated a preference for the "a" to appear in parentheses when the quote is written. The debate continues on the matter, as "Armstrong's 'poetic' slip on Moon" at BBC News (3 June 2009) http://news.bbc.co.uk/2/hi/science/nature/8081817.stm reports that more recent analysis by linguist John Olsson and author Chris Riley with higher quality recordings indicates that he did not say "a".Variant: That's one small step for a man, one giant leap for mankind.

„It's a brilliant surface in that sunlight.“

„Pilots take no special joy in walking: pilots like flying.“

On his famous moonwalk, as quoted in In the Shadow of the Moon : A Challenging Journey to Tranquility, 1965-1969 (2007) by Francis French and Colin BurgessContext: Pilots take no special joy in walking: pilots like flying. Pilots generally take pride in a good landing, not in getting out of the vehicle.

„A century hence, 2000 may be viewed as quite a primitive period in human history. It’s something to hope for.“

"The Engineered Century" http://www.nae.edu/Publications/Bridge/TheVertiginousMarchofTechnology/TheEngineeredCentury.aspx remarks delivered during National Engineers Week on behalf of the National Academy of Engineering at the National Press Club (22 February 2000)Context: A century hence, 2000 may be viewed as quite a primitive period in human history. It’s something to hope for. … I am, and ever will be, a white-socks, pocket-protector, nerdy engineer — born under the second law of thermodynamics, steeped in the steam tables, in love with free-body diagrams, transformed by Laplace, and propelled by compressible flow. As an engineer, I take a substantial amount of pride in the accomplishments of my profession.

„The exciting part for me, as a pilot, was the landing on the moon.“

Interview at The New Space Race (August 2007) http://library.thinkquest.org/07aug/00861/armstrongiscool.htmContext: The exciting part for me, as a pilot, was the landing on the moon. That was the time that we had achieved the national goal of putting Americans on the moon. The landing approach was, by far, the most difficult and challenging part of the flight. Walking on the lunar surface was very interesting, but it was something we looked on as reasonably safe and predictable. So the feeling of elation accompanied the landing rather than the walking.

„The landing approach was, by far, the most difficult and challenging part of the flight.“

Interview at The New Space Race (August 2007) http://library.thinkquest.org/07aug/00861/armstrongiscool.htmContext: The exciting part for me, as a pilot, was the landing on the moon. That was the time that we had achieved the national goal of putting Americans on the moon. The landing approach was, by far, the most difficult and challenging part of the flight. Walking on the lunar surface was very interesting, but it was something we looked on as reasonably safe and predictable. So the feeling of elation accompanied the landing rather than the walking.

„Friends and colleagues all of a sudden looked at us, treated us, slightly differently than had months or years before when we were working together. I never quite understood that.“

„It's an interesting place to be. I recommend it.“

„All the Apollo people were working hard, working long hours, and were dedicated to making certain everything they did, they were doing to the very best of their ability.“

„Through books you will meet poets and novelists whose creations will fire your imagination. You will meet the great thinkers who will share with you their philosophies, their concepts of the world, of humanity and of creation. You will learn about events that have shaped our history, of deeds both noble and ignoble. All of this knowledge is yours for the taking… Your library is a storehouse for mind and spirit. Use it well.“

„I believe that every human has a finite number of heartbeats. I don't intend to waste any of mine running around doing exercises.“

First On The Moon : A Voyage with Neil Armstrong, Michael Collins, Edwin E Aldrin, Jr. (1970) edited by Gene Farmer and Dora Jane Hamblin, p. 113, states of this: "Like many a quote which gets printed once and therefore enshrined in the libraries of all newspapers and magazines, this particular one was erroneous. Neil recalled having heard the quote, and he even recalled having repeated it once. He did not subscribe to its thesis, however, and he only quoted it so that he could disagree with it."Misattributed

„For The United States, the leading space faring nation for nearly half a century, to be without carriage to low Earth orbit and with no human exploration capability to go beyond Earth orbit for an indeterminate time into the future, destines our nation to become one of second or even third rate stature. While the President’s plan envisages humans traveling away from Earth and perhaps toward Mars at some time in the future, the lack of developed rockets and spacecraft will assure that ability will not be available for many years.
Without the skill and experience that actual spacecraft operation provides, the USA is far too likely to be on a long downhill slide to mediocrity. America must decide if it wishes to remain a leader in space. If it does, we should institute a program which will give us the very best chance of achieving that goal.“

„It would be impossible to overstate the appreciation that we on the crew feel for your dedication and the quality of your work.“

„I guess we all like to be recognized not for one piece of fireworks but for the ledger of our daily work.“

„Houston, Tranquility Base here. The Eagle has landed.“

First words from the Apollo 11 lunar module Eagle after guiding the craft to a landing on the Moon at 4:17pm EDT (20 July 1969)

„Later Apollo flights were able to do more and move further in order to cover larger areas, particularly when the Lunar Rover vehicle became available in 1971.“

„The horizon seems quite close to you because the curvature is so much more pronounced than here on Earth.“

„Space has not changed but technology has, in many cases, improved dramatically. A good example is digital technology where today's cell phones are far more powerful than the computers on the Apollo Command Module and Lunar Module that we used to navigate to the moon and operate all the spacecraft control systems.“

On the differences between the present and the time of the space race which existed during the Cold War years, in an interview at The New Space Race (August 2007)