Confucius was a Chinese philosopher and politician of the Spring and Autumn period.

The philosophy of Confucius, also known as Confucianism, emphasized personal and governmental morality, correctness of social relationships, justice, kindness, and sincerity. His followers competed successfully with many other schools during the Hundred Schools of Thought era only to be suppressed in favor of the Legalists during the Qin dynasty. Following the victory of Han over Chu after the collapse of Qin, Confucius's thoughts received official sanction in the new government and were further developed into a system known in the West as Neo-Confucianism, and later New Confucianism .

Confucius is traditionally credited with having authored or edited many of the Chinese classic texts including all of the Five Classics, but modern scholars are cautious of attributing specific assertions to Confucius himself. Aphorisms concerning his teachings were compiled in the Analects, but only many years after his death.

Confucius's principles have commonality with Chinese tradition and belief. He championed strong family loyalty, ancestor veneration, and respect of elders by their children and of husbands by their wives, recommending family as a basis for ideal government. He espoused the well-known principle "Do not do unto others what you do not want done to yourself", the Golden Rule. He is also a traditional deity in Daoism.

Confucius is widely considered as one of the most important and influential individuals in shaping human history. His teaching and philosophy greatly impacted people around the world and remains influential today. Wikipedia

„The funniest people are the saddest ones“

„Everything has beauty, but not everyone sees it.“

„It does not matter how slowly you go as long as you do not stop.“

„Wheresoever you go, go with all your heart.“ 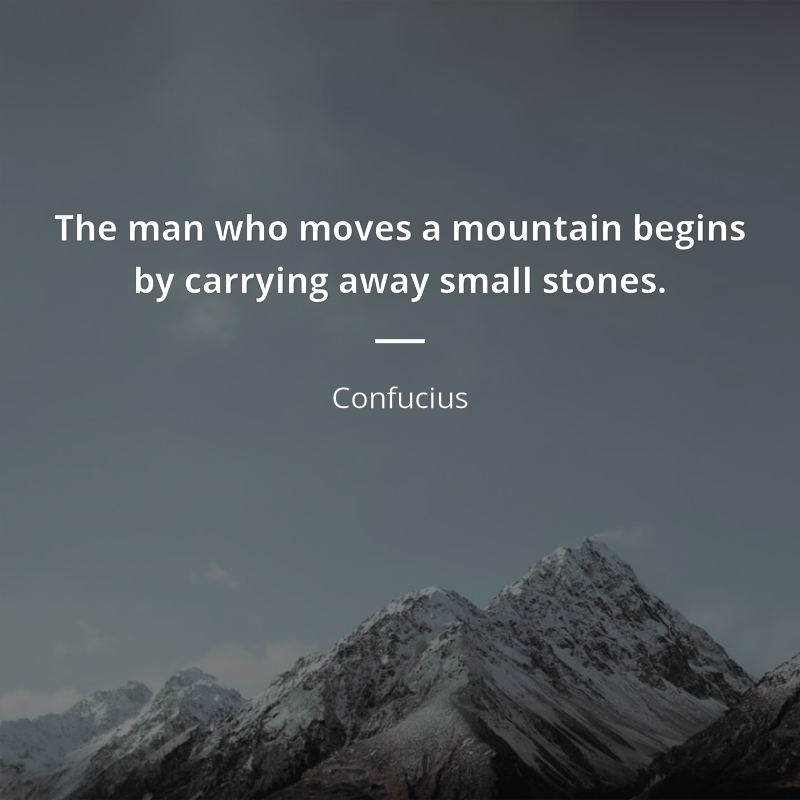 „The man who moves a mountain begins by carrying away small stones.“

The Analects, as reported in Chambers Dictionary of Quotations (1997), p. 279.Attributed

„Don't use cannon to kill musquito.“

„He who knows all the answers has not been asked all the questions.“

„Life is really simple, but we insist on making it complicated.“

Attributed on the internet but not found in print prior to an attribution in Aero Digest, Vols. 58–59, 1949, p. 115 https://books.google.com/books?id=q2ofAQAAMAAJ&dq=%22Life+is+simple%22+but+we+insist+on+making+it+complicated&focus=searchwithinvolume&q=%22Life+is+simple%22+Misattributed, Not Chinese

„If you make a mistake and do not correct it, this is called a mistake.“

„Study the past if you would define the future.“

„Before you embark on a journey of revenge, dig two graves.“

Attributed in Lillet Walters (2000), Secrets of Superstar Speakers; attributed in English sources as a "Japanese proverb" as early as 1924Misattributed, Not Chinese

„To be wronged is nothing, unless you continue to remember it.“

„Respect yourself and others will respect you.“

„Silence is a true friend who never betrays.“

„You cannot open a book without learning something.“

„When you see a good person, think of becoming like her/him. When you see someone not so good, reflect on your own weak points.“