„UNLESS someone like you
cares a whole awful lot,
nothing is going to get better.
It's not.“

„No matter what happens, or how bad it seems today, life does go on, and it will be better tomorrow.“

„You gain strength, courage and confidence by every experience in which you really stop to look fear in the face.“

Source: You Learn by Living (1960), p. 29–30Context: You gain strength, courage and confidence by every experience in which you really stop to look fear in the face. You are able to say to yourself, "I have lived through this horror. I can take the next thing that comes along." … You must do the thing you think you cannot do. 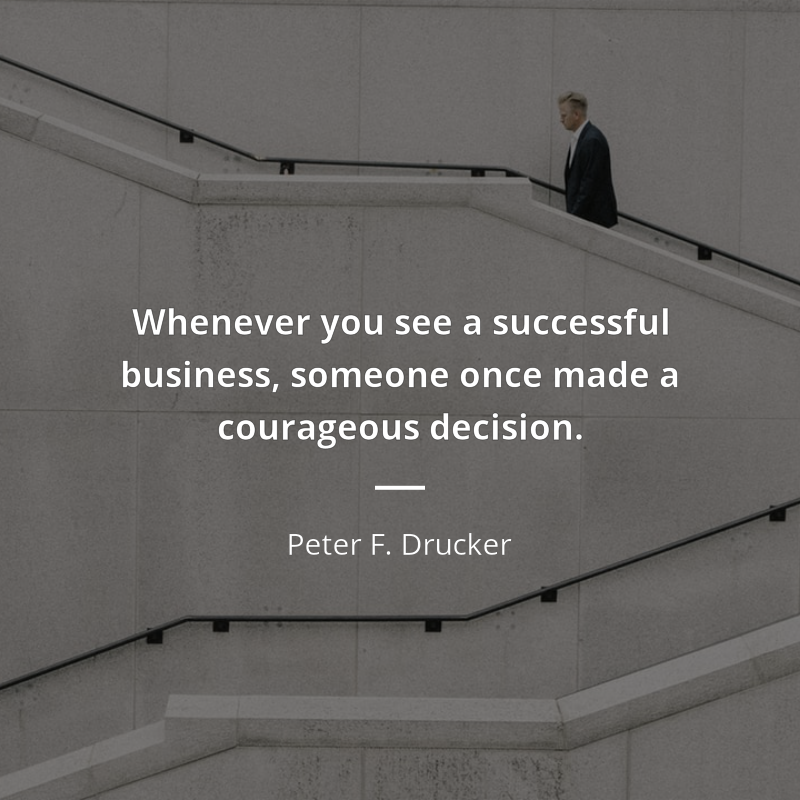 „Whenever you see a successful business, someone once made a courageous decision.“

„You have enemies? Good. That means you’ve stood up for something, sometime in your life.“

Often attributed to Churchill, this thought was originally expressed by the French author Victor Hugo in Villemain (1845), as follows: You have enemies? Why, it is the story of every man who has done a great deed or created a new idea. It is the cloud which thunders around everything that shines. Fame must have enemies, as light must have gnats. Do not bother yourself about it; disdain. Keep your mind serene as you keep your life clear.Villemain is a brief segment taken from Hugo’s Choses Vues (Things Seen), a running journal Hugo kept of events he witnessed. The original French versions of these journals were published after Hugo's death.Misattributed

Source: Jordan, Michael. I Can't Accept Not Trying : Michael Jordan on the Pursuit of Excellence. San Francisco, CA: HarperSanFrancisco, 1994. p. 129Context: I can accept failure. Everyone fails at something. But I can't accept not trying [no hard work].
Talent wins games, but teamwork and intelligence wins championships. (p. 20, 24)

„Intelligence is the ability to adapt to change.“

„Keep your face always toward the sunshine – and shadows will fall behind you.“

This has become attributed to both Walt Whitman and Helen Keller, but has not been found in either of their published works, and variations of the quote are listed as a proverb commonly used in both the US and Canada in A Dictionary of American Proverbs (1992), edited by Wolfgang Mieder, Kelsie B. Harder and Stewart A. Kingsbury.Misattributed

„Some people want it to happen, some wish it would happen, others make it happen.“

Variant: Some people want it to happen, some wish it would happen, and others make it happen.

„The power of imagination makes us infinite.“

1 September 1875, page 226John of the Mountains, 1938Context: How infinitely superior to our physical senses are those of the mind! The spiritual eye sees not only rivers of water but of air. It sees the crystals of the rock in rapid sympathetic motion, giving enthusiastic obedience to the sun's rays, then sinking back to rest in the night. The whole world is in motion to the center. So also sounds. We hear only woodpeckers and squirrels and the rush of turbulent streams. But imagination gives us the sweet music of tiniest insect wings, enables us to hear, all round the world, the vibration of every needle, the waving of every bole and branch, the sound of stars in circulation like particles in the blood. The Sierra canyons are full of avalanche debris — we hear them boom again, for we read past sounds from present conditions. Again we hear the earthquake rock-falls. Imagination is usually regarded as a synonym for the unreal. Yet is true imagination healthful and real, no more likely to mislead than the coarser senses. Indeed, the power of imagination makes us infinite.

„A teacher affects eternity; he can never tell where his influence stops.“

„One man can be a crucial ingredient on a team, but one man cannot make a team.“

„The best preparation for tomorrow is doing your best today.“

„A team is where a boy can prove his courage on his own. A gang is where a coward goes to hide.“

„If everyone is moving forward together, then success takes care of itself.“

„Only the guy who isn't rowing has time to rock the boat.“