Aristotle was an ancient Greek philosopher and scientist born in the city of Stagira, Chalkidiki, in the north of Classical Greece. Along with Plato, he is considered the "Father of Western Philosophy". Aristotle provided a complex and harmonious synthesis of the various existing philosophies prior to him, including those of Socrates and Plato, and it was above all from his teachings that the West inherited its fundamental intellectual lexicon, as well as problems and methods of inquiry. As a result, his philosophy has exerted a unique influence on almost every form of knowledge in the West and it continues to be central to the contemporary philosophical discussion.

Little is known about his life. His father, Nicomachus, died when Aristotle was a child, and he was brought up by a guardian. At seventeen or eighteen years of age, he joined Plato's Academy in Athens and remained there until the age of thirty-seven . His writings cover many subjects – including physics, biology, zoology, metaphysics, logic, ethics, aesthetics, poetry, theatre, music, rhetoric, psychology, linguistics, economics, politics and government – and constitute the first comprehensive system of Western philosophy. Shortly after Plato died, Aristotle left Athens and, at the request of Philip II of Macedon, tutored Alexander the Great beginning in 343 BC. Teaching Alexander gave Aristotle many opportunities. He established a library in the Lyceum which helped him to produce many of his hundreds of books, which were papyrus scrolls. The fact that Aristotle was a pupil of Plato contributed to his former views of Platonism, but, following Plato's death, Aristotle immersed himself in empirical studies and shifted from Platonism to empiricism. He believed all concepts and knowledge were ultimately based on perception. Aristotle's views on natural sciences represent the groundwork underlying many of his works.

Aristotle's views on physical science profoundly shaped medieval scholarship. Their influence extended from Late Antiquity and the Early Middle Ages into the Renaissance, and were not replaced systematically until the Enlightenment and theories such as classical mechanics. Some of Aristotle's zoological observations, such as on the hectocotyl arm of the octopus, were disbelieved until the 19th century. His works contain the earliest known formal study of logic, studied by medieval scholars such as Peter Abelard and John Buridan. Aristotelianism profoundly influenced Islamic thought during the Middle Ages, as well as Christian theology, especially the Neoplatonism of the Early Church and the scholastic tradition of the Catholic Church. Aristotle was revered among medieval Muslim scholars as "The First Teacher". His ethics, though always influential, gained renewed interest with the modern advent of virtue ethics.

All aspects of Aristotle's philosophy continue to be the object of academic study. Though Aristotle wrote many elegant treatises and dialogues for publication, only around a third of his original output has survived, none of it intended for publication. Aristotle has been depicted by major artists including Raphael and Rembrandt. Early Modern theories including William Harvey's circulation of the blood and Galileo Galilei's kinematics were developed in reaction to Aristotle's. In the 19th century, George Boole gave Aristotle's logic a mathematical foundation with his system of algebraic logic. In the 20th century, Martin Heidegger created a new interpretation of Aristotle's political philosophy, but elsewhere Aristotle was widely criticised, even ridiculed by thinkers such as the philosopher Bertrand Russell and the biologist Peter Medawar. More recently, Aristotle has again been taken seriously, such as in the thinking of Ayn Rand and Alasdair MacIntyre, while Armand Marie Leroi has reconstructed Aristotle's biology. The image of Aristotle tutoring the young Alexander remains current, and the Poetics continues to play a role in the cinema of the United States.

ancient Greek philosopher, one of the founders of the Cynic… 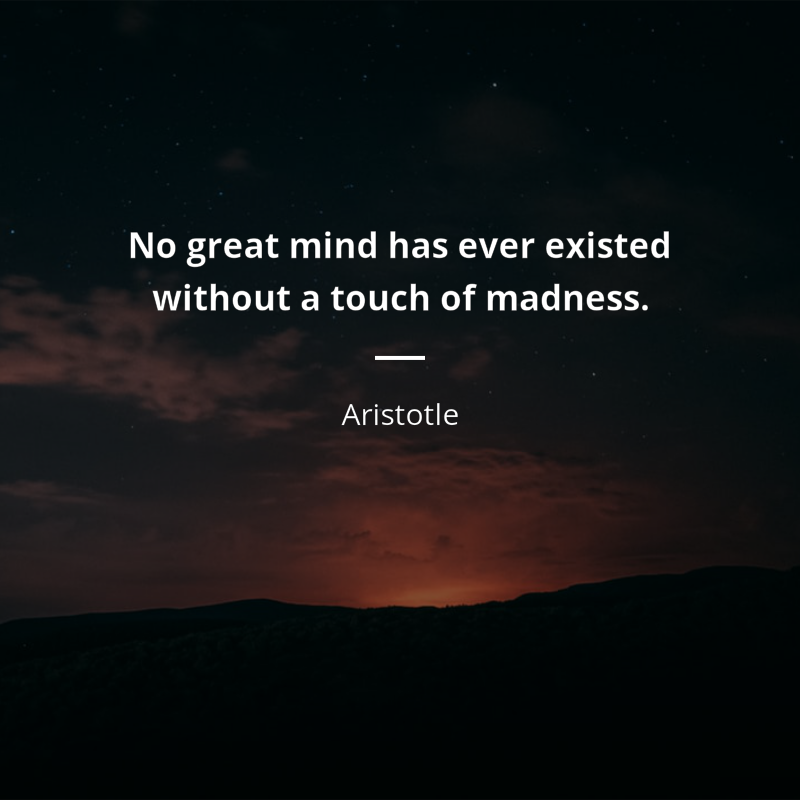 „No great mind has ever existed without a touch of madness.“

„A friend is a second self.“

„Those who educate children well are more to be honored than they who produce them; for these only gave them life, those the art of living well.“

„It is the mark of an educated mind to be able to entertain a thought without accepting it.“

„The roots of education … are bitter, but the fruit is sweet.“

—  Aristotle
The Lives and Opinions of Eminent Philosophers

„Whosoever is delighted in solitude, is either a wild beast or a god.“

„Wise men speak when they have something to say, fools speak because they have to say something“

„… happiness does not consist in amusement. In fact, it would be strange if our end were amusement, and if we were to labor and suffer hardships all our life long merely to amuse ourselves…. The happy life is regarded as a life in conformity with virtue. It is a life which involves effort and is not spent in amusement….“

„We must be neither cowardly nor rash but courageous.“

„Memory is the scribe of the soul“

„The aim of the wise is not to secure pleasure, but to avoid pain.“

„Time crumbles things; everything grows old under the power of Time and is forgotten through the lapse of Time.“

„All Earthquakes and Disasters are warnings; there’s too much corruption in the world“