Albert Einstein was a German-born theoretical physicist. Einstein developed the theory of relativity, one of the two pillars of modern physics . Einstein's work is also known for its influence on the philosophy of science. Einstein is best known by the general public for his mass–energy equivalence formula E = mc2 . He received the 1921 Nobel Prize in Physics "for his services to theoretical physics, and especially for his discovery of the law of the photoelectric effect", a pivotal step in the evolution of quantum theory.

Near the beginning of his career, Einstein thought that Newtonian mechanics was no longer enough to reconcile the laws of classical mechanics with the laws of the electromagnetic field. This led him to develop his special theory of relativity during his time at the Swiss Patent Office in Bern , Switzerland. However, he realized that the principle of relativity could also be extended to gravitational fields and—with his subsequent theory of gravitation in 1916—he published a paper on general relativity. He continued to deal with problems of statistical mechanics and quantum theory, which led to his explanations of particle theory and the motion of molecules. He also investigated the thermal properties of light which laid the foundation of the photon theory of light. In 1917, Einstein applied the general theory of relativity to model the large-scale structure of the universe.

Between 1895 and 1914, he lived in Switzerland , where he received his academic diploma from the Swiss Federal Polytechnic in Zürich in 1900. He later taught there at the same institute as a professor of theoretical physics between 1912 and 1914 before he left for Berlin. In 1901, after being stateless for more than five years, Einstein acquired Swiss citizenship, which he kept for the rest of his life. In 1905, Einstein was awarded a PhD by the University of Zürich. The same year, his annus mirabilis , he published four groundbreaking papers, which were to bring him to the notice of the academic world, at the age of 26.

He was visiting the United States when Adolf Hitler came to power in 1933 and—being Jewish—did not go back to Germany, where he had been a professor at the Berlin Academy of Sciences. He settled in the United States, becoming an American citizen in 1940. On the eve of World War II, he endorsed a letter to President Franklin D. Roosevelt alerting him to the potential development of "extremely powerful bombs of a new type" and recommending that the U.S. begin similar research. This eventually led to what would become the Manhattan Project. Einstein supported defending the Allied forces, but generally denounced the idea of using the newly discovered nuclear fission as a weapon. Later, with the British philosopher Bertrand Russell, Einstein signed the Russell–Einstein Manifesto, which highlighted the danger of nuclear weapons. Einstein was affiliated with the Institute for Advanced Study in Princeton, New Jersey, until his death in 1955.

Einstein published more than 300 scientific papers along with over 150 non-scientific works. Einstein's intellectual achievements and originality have made the word "Einstein" synonymous with "genius".

The Evolution of Physics

The World as I See It

Relativity: The Special and the General Theory

„Try to become not a man of success, but try rather to become a man of value.“

„Energy cannot be created or destroyed, it can only be changed from one form to another.“

„Life is like riding a bicycle. To keep your balance you must keep moving.“

„An empty stomach is not a good political adviser.“

„In my opinion, condemning the Zionist movement as "nationalistic" is unjustified. Consider the path by which Herzl came to his mission. Initially he had been completely cosmopolitan. But during the Dreyfus trial in Paris he suddenly realized with great clarity how precarious was the situation of the Jews in the western world. And courageously he drew the conclusion that we are discriminated against or murdered not because we are Germans, Frenchmen, Americans, etc. of the "Jewish faith" but simply because we are Jews. Thus already our precarious situation forces us to stand together irrespective of our citizenship.
Zionism gave the German Jews no great protection against annihilation. But it did give the survivors the inner strength to endure the debacle with dignity and without losing their healthy self respect. Keep in mind that perhaps a similar fate could be lying in wait for your children.“

„Curiosity is more important than knowledge.“

„I must be willing to give up what I am in order to become what I will be.“ 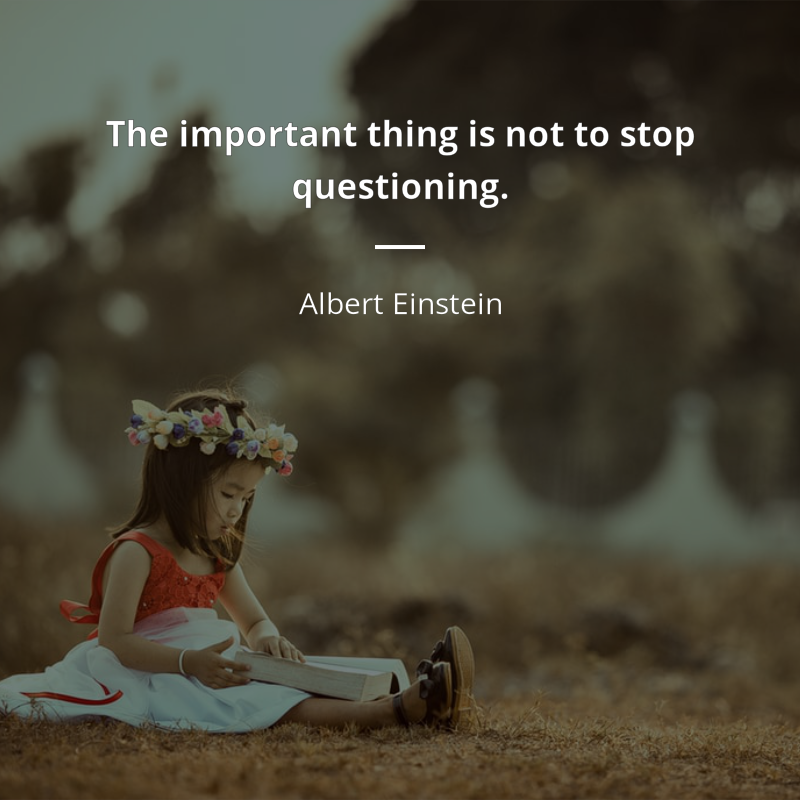 „The important thing is not to stop questioning.“

Old Man's Advice to Youth: "Never Lose a Holy Curiosity," http://books.google.com/books?id=dlYEAAAAMBAJ&lpg=PP1&dq=Life%2C%202%20May%201955&pg=PA61#v=onepage&q=Life,%202%20May%201955&f=false LIFE magazine (2 May 1955) statement to William Miller, p. 64.1950sContext: The important thing is not to stop questioning. Curiosity has its own reason for existence. One cannot help but be in awe when he contemplates the mysteries of eternity, of life, of the marvelous structure of reality. It is enough if one tries merely to comprehend a little of this mystery each day. Never lose a holy curiosity. … Don't stop to marvel.

„Everything must be made as simple as possible. But not simpler.“

Variant: Everything should be made as simple as possible, but no simpler.

„Black holes are where God divided by zero.“

„It is not that I'm so smart. But I stay with the questions much longer.“

Variant: It's not that I'm so smart, it's just that I stay with problems longer.

„I speak to everyone in the same way, whether he is the garbage man or the president of the university.“

Attributed to Einstein by his colleague Léopold Infeld in his book Quest: An Autobiography (1949), p. 291 http://books.google.com/books?id=fsvXYpOSowkC&q=%22garbage+man%22#v=snippet&q=%22garbage%20man%22&f=falseAttributed in posthumous publications

„Anyone who has never made a mistake has never tried anything new.“

„There are only two ways to live your life. One is as though nothing is a miracle. The other is as though everything is.“

„Wisdom is not a product of schooling but of the lifelong attempt to acquire it.“

From the same 24 March 1954 letter as above, p. 44Attributed in posthumous publications

„You can never solve a problem on the level on which it was created.“

Variant: We can not solve our problems with the same level of thinking that created them

„Science without religion is lame, religion without science is blind.“

Source: Attributed in posthumous publications, p. 94Context: Religion and science go together. As I've said before, science without religion is lame and religion without science is blind. They are interdependent and have a common goal—the search for truth. Hence it is absurd for religion to proscribe Galileo or Darwin or other scientists. And it is equally absurd when scientists say that there is no God. The real scientist has faith, which does not mean that he must subscribe to a creed. Without religion there is no charity. The soul given to each of us is moved by the same living spirit that moves the universe.

„I have no special talents. I am only passionately curious.“

Duce and President of the Council of Ministers of Italy. Le… 1883 - 1945
Another 69 today anniversaries