Stanley Kubrick was an American film director, screenwriter, and producer. He is frequently cited as one of the most influential filmmakers in cinematic history. His films, which are mostly adaptations of novels or short stories, cover a wide range of genres, and are noted for their realism, dark humor, unique cinematography, extensive set designs, and evocative use of music.

Kubrick was raised in the Bronx, New York City, and attended William Howard Taft High School from 1941 to 1945. He received average grades, but displayed a keen interest in literature, photography, and film from a young age, and taught himself all aspects of film production and directing after graduating from high school. After working as a photographer for Look magazine in the late 1940s and early 1950s, he began making short films on a shoestring budget, and made his first major Hollywood film, The Killing, for United Artists in 1956. This was followed by two collaborations with Kirk Douglas, the war picture Paths of Glory and the historical epic Spartacus . His reputation as a filmmaker in Hollywood grew, and he was approached by Marlon Brando to film what would become One-Eyed Jacks , though Brando eventually decided to direct it himself.

Creative differences arising from his work with Douglas and the film studios, a dislike of the Hollywood industry, and a growing concern about crime in America prompted Kubrick to move to the United Kingdom in 1961, where he spent most of the remainder of his life and career. His home at Childwickbury Manor in Hertfordshire, which he shared with his wife Christiane, became his workplace, where he did his writing, research, editing, and management of production details. This allowed him to have almost complete artistic control over his films, but with the rare advantage of having financial support from major Hollywood studios. His first productions in Britain were two films with Peter Sellers, Lolita and Dr. Strangelove .

A demanding perfectionist, Kubrick assumed control over most aspects of the filmmaking process, from direction and writing to editing, and took painstaking care with researching his films and staging scenes, working in close coordination with his actors and other collaborators. He often asked for several dozen retakes of the same shot in a movie, which resulted in many conflicts with his casts. Despite the resulting notoriety among actors, many of Kubrick's films broke new ground in cinematography. The scientific realism and innovative special effects of 2001: A Space Odyssey were without precedent in the history of cinema, and the film earned him his only personal Oscar, for Best Visual Effects. Steven Spielberg has referred to the film as his generation's "big bang", and it is regarded as one of the greatest films ever made. For the 18th-century period film Barry Lyndon , Kubrick obtained lenses developed by Zeiss for NASA, to film scenes under natural candlelight. With The Shining , he became one of the first directors to make use of a Steadicam for stabilized and fluid tracking shots. While many of Kubrick's films were controversial and initially received mixed reviews upon release—particularly A Clockwork Orange , which Kubrick pulled from circulation in the UK following a mass media frenzy—most were nominated for Oscars, Golden Globes, or BAFTA Awards, and underwent critical reevaluations. His last film, Eyes Wide Shut, was completed shortly before his death in 1999 at the age of 70. Wikipedia 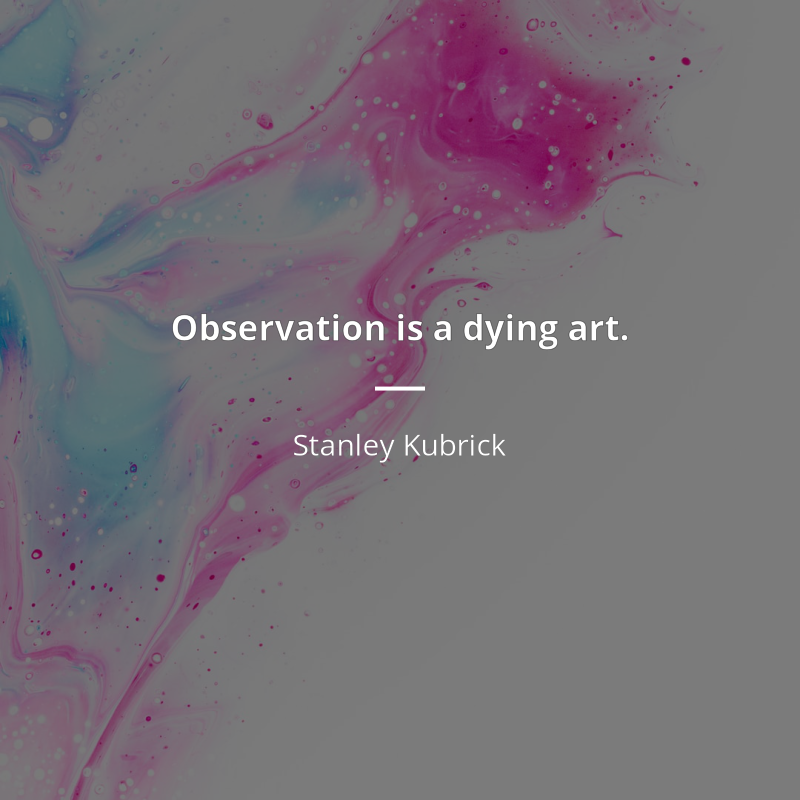 „Observation is a dying art.“

„The first really important book I read about filmmaking was The Film Technique by Pudovkin. This was some time before I had ever touched a movie camera and it opened my eyes to cutting and montage.“

„When I made my first film, I think the thing was probably helped me the most was that it was such an unusual thing to do in the early 50s for someone who actually go and make a film. People thought it was impossible. It really is terribly easy. All anybody needs is a camera, a tape recorder, and some imagination.“

„Anyone who has ever been privileged to direct a film also knows that, although it can be like trying to write War and Peace in a bumper car in an amusement park, when you finally get it right, there are not many joys in life that can equal the feeling.“

„The destruction of this planet would have no significance on a cosmic scale.“

„If chess has any relationship to film-making, it would be in the way it helps you develop patience and discipline in choosing between alternatives at a time when an impulsive decision seems very attractive.“

„A film is - or should be - more like music than like fiction. It should be a progression of moods and feelings. The theme, what's behind the emotion, the meaning, all that comes later.“

„If it can be written, or thought, it can be filmed.“

„I have always enjoyed dealing with a slightly surrealistic situation and presenting it in a realistic manner.“

Quoted in Kubrick : Inside a Film Artist's Maze (2000) by Thomas Allen Nelson, p. 14Context: I have always enjoyed dealing with a slightly surrealistic situation and presenting it in a realistic manner. I've always liked fairy tales and myths, magical stories. I think they are somehow closer to the sense of reality one feels today than the equally stylized "realistic" story in which a great deal of selectivity and omission has to occur in order to preserve its "realist" style.

„I think the big mistake in schools is trying to teach children anything, and by using fear as the basic motivation.“

Quoted in Stanley Kubrick at Look Magazine (2013) by Phillipe Mather, p. 46Context: I think the big mistake in schools is trying to teach children anything, and by using fear as the basic motivation. Fear of getting failing grades, fear of not staying with your class, etc. Interest can produce learning on a scale compared to fear as a nuclear explosion to a firecracker.

„Interest can produce learning on a scale compared to fear as a nuclear explosion to a firecracker.“

Quoted in Stanley Kubrick at Look Magazine (2013) by Phillipe Mather, p. 46Context: I think the big mistake in schools is trying to teach children anything, and by using fear as the basic motivation. Fear of getting failing grades, fear of not staying with your class, etc. Interest can produce learning on a scale compared to fear as a nuclear explosion to a firecracker.

„The very meaninglessness of life forces man to create his own meaning.“

Quoted in Halliwell's Filmgoer's and Video Viewer's Companion (1988), p. 403. Seems that this sentence first appeared in an 1968 Playboy Interview "Stanley Kubrick on Mortality, the Fear of Flying, and the Purpose of Existence: 1968 Playboy Interview" http://www.brainpickings.org/2012/07/26/stanley-kubrick-playboy-interview/Context: The very meaninglessness of life forces man to create his own meaning. If it can be written or thought, it can be filmed.

„However vast the darkness, we must supply our own light.“

Interviewed by Eric Nordern, Playboy (September 1968); later published in Stanley Kubrick: Interviews (2001) http://books.google.com/books?id=iOU9bIlnPHIC&pg=PA73&lpg=PA73&dq=however+vast+darkness+supply+light&source=web&ots=WSx0cc_E1n&sig=OMT0-SOVCFtSN8a1WosgIR1PMWAContext: The most terrifying fact about the universe is not that it is hostile but that it is indifferent; but if we can come to terms with this indifference and accept the challenges of life within the boundaries of death — however mutable man may be able to make them — our existence as a species can have genuine meaning and fulfillment. However vast the darkness, we must supply our own light.

„If you can talk brilliantly about a problem, it can create the consoling illusion that it has been mastered.“

„All work and no play makes Jack a dull boy.“

„The dead know only one thing, it is better to be alive“

„I’ve never been certain whether the moral of the Icarus story should only be, as is generally accepted, ‘don’t try to fly too high,’ or whether it might also be thought of as ‘forget the wax and feathers, and do a better job on the wings.“

„I never learned anything at all in school and didn't read a book for pleasure until I was 19 years old.“