James Augustine Aloysius Joyce was an Irish novelist, short story writer, poet, teacher, and literary critic. He contributed to the modernist avant-garde and is regarded as one of the most influential and important authors of the 20th century. Joyce is best known for Ulysses , a landmark work in which the episodes of Homer's Odyssey are paralleled in a variety of literary styles, most famously stream of consciousness. Other well-known works are the short-story collection Dubliners , and the novels A Portrait of the Artist as a Young Man and Finnegans Wake . His other writings include three books of poetry, a play, his published letters and occasional journalism.

Joyce was born in Dublin into a middle-class family. A brilliant student, he briefly attended the Christian Brothers-run O'Connell School before excelling at the Jesuit schools Clongowes and Belvedere, despite the chaotic family life imposed by his father's unpredictable finances. He went on to attend University College Dublin.

In 1904, in his early twenties, Joyce emigrated to continental Europe with his partner Nora Barnacle. They lived in Trieste, Paris, and Zürich. Although most of his adult life was spent abroad, Joyce's fictional universe centres on Dublin and is populated largely by characters who closely resemble family members, enemies and friends from his time there. Ulysses in particular is set with precision in the streets and alleyways of the city. Shortly after the publication of Ulysses, he elucidated this preoccupation somewhat, saying, "For myself, I always write about Dublin, because if I can get to the heart of Dublin I can get to the heart of all the cities of the world. In the particular is contained the universal." Wikipedia

A Portrait of the Artist as a Young Man

—  James Joyce, book A Portrait of the Artist as a Young Man

Source: A Portrait of the Artist as a Young Man 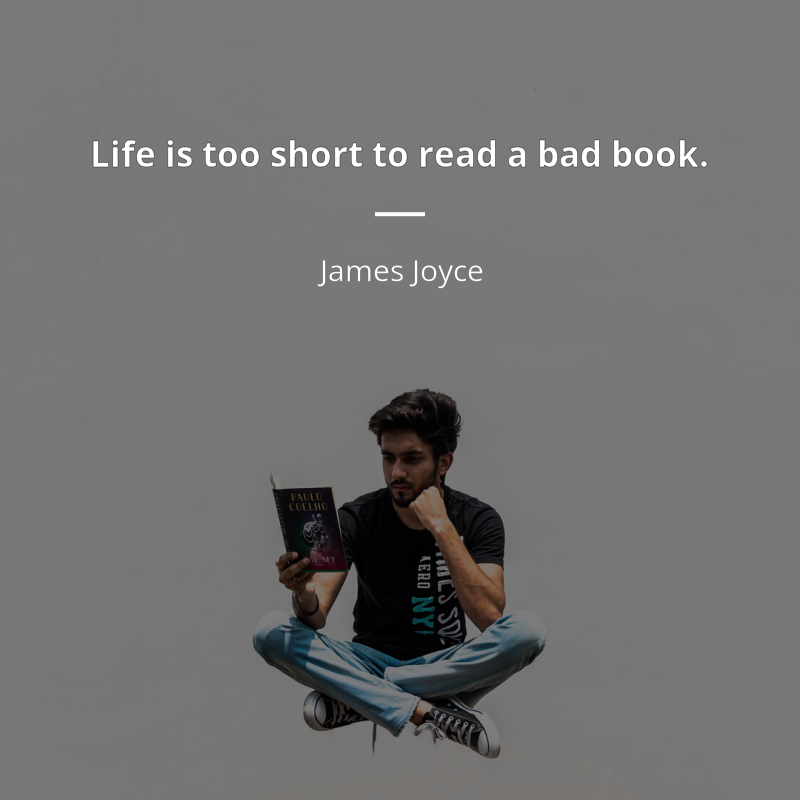 „Life is too short to read a bad book.“

„In the particular is contained the universal.“

„Shut your eyes and see.“

„Think you're escaping and run into yourself. Longest way round is the shortest way home.“

„And then I asked him with my eyes to ask again yes and then he asked me would I yes and his heart was going like mad and yes I said yes I will yes.“

„His heart danced upon her movements like a cork upon a tide. He heard what her eyes said to him from beneath their cowl and knew that in some dim past, whether in life or revery, he had heard their tale before.“

—  James Joyce, book A Portrait of the Artist as a Young Man

Source: A Portrait of the Artist as a Young Man

„History, Stephen said, is a nightmare from which I am trying to awake.“

„Imagine my glimpses at that clock as the gropings of a spiritual eye which seeks to adjust its vision to an exact focus. The moment the focus is reached the object is epiphanised.“

Stephen Hero (1944)Context: Imagine my glimpses at that clock as the gropings of a spiritual eye which seeks to adjust its vision to an exact focus. The moment the focus is reached the object is epiphanised. It is just in this epiphany that I find the third, the supreme quality of beauty. … No esthetic theory, pursued Stephen relentlessly, is of any value which investigates with the aid of the lantern of tradition. What we symbolise in black the Chinaman may symbolise in yellow: each has his own tradition. Greek beauty laughs at Coptic beauty and the American Indian derides them both. It is almost impossible to reconcile all tradition whereas it is by no means impossible to find the justification of every form of beauty which has ever been adored on the earth by an examination into the mechanism of esthetic apprehension whether it be dressed in red, white, yellow or black. We have no reason for thinking that the Chinaman has a different system of digestion from that which we have though our diets are quite dissimilar. The apprehensive faculty must be scrutinised in action.

„Humme the Cheapner, Esc, overseen as we thought him, yet worthy of the naym, came at this timecoloured place where we live in our paroqial fermament one tide on another“

„Every night as I gazed up at the window I said to myself softly the word paralysis.“

"The Sisters"Dubliners (1914)Context: Every night as I gazed up at the window I said to myself softly the word paralysis. It had always sounded strangely in my ears, like the word gnomon in the Euclid and the word simony in the Catechism. But now it sounded to me like the name of some maleficent and sinful being. It filled me with fear, and yet I longed to be nearer to it and to look upon its deadly work.

„I’ve lapped so long. As you said. It fair takes. If I lose my breath for a minute or two don’t speak, remember! Once it happened, so it may again.“

„He was not sure what idea he wished to express but the thought that a poetic moment had touched upon him took life within him like an infant hope. He stepped onward bravely.“

„A Place for Everything and Everything in its Place, Is the Pen Mightier than the Sword?“

Page 306Finnegans Wake (1939)Context: A Place for Everything and Everything in its Place, Is the Pen Mightier than the Sword? A Successful Career in the Civil Service.

„It soared, a bird, it held its flight, a swift pure cry, soar silver orb it leaped serene,“

Ulysses (1922)Context: It soared, a bird, it held its flight, a swift pure cry, soar silver orb it leaped serene, speeding, sustained, to come, don't spin it out too long long breath he breath long life, soaring high, high resplendent, aflame, crowned, high in the effulgence symbolistic, high, of the ethereal bosom, high, of the high vast irradiation everywhere all soaring all around about the all, the endlessnessnessness... (271)

Finnegans Wake (1939)Context: End here. Us then. Finn, again! Take. Bussoftlhee, mememormee! Till thousandsthee. Lps. The keys to. Given! A way a lone a last a loved a long the / riverrun, past Eve and Adam's, from swerve of shore to bend of bay, brings us by a commodius vicus of recirculation back to Howth Castle and Environs. (628.13 to 3.3)