Dickinson was born in Amherst, Massachusetts. Although part of a prominent family with strong ties to its community, Dickinson lived much of her life in reclusive isolation. After studying at the Amherst Academy for seven years in her youth, she briefly attended the Mount Holyoke Female Seminary before returning to her family's house in Amherst. Considered an eccentric by locals, she developed a noted penchant for white clothing and became known for her reluctance to greet guests or, later in life, to even leave her bedroom. Dickinson never married, and most friendships between her and others depended entirely upon correspondence. Dickinson was a recluse for the later years of her life.

While Dickinson was a prolific private poet, fewer than a dozen of her nearly 1,800 poems were published during her lifetime. The work that was published during her lifetime was usually altered significantly by the publishers to fit the conventional poetic rules of the time. Dickinson's poems are unique for the era in which she wrote; they contain short lines, typically lack titles, and often use slant rhyme as well as unconventional capitalization and punctuation. Many of her poems deal with themes of death and immortality, two recurring topics in letters to her friends.

Although Dickinson's acquaintances were most likely aware of her writing, it was not until after her death in 1886—when Lavinia, Dickinson's younger sister, discovered her cache of poems—that the breadth of her work became apparent to the public. Her first collection of poetry was published in 1890 by personal acquaintances Thomas Wentworth Higginson and Mabel Loomis Todd, though both heavily edited the content. A complete, and mostly unaltered, collection of her poetry became available for the first time when scholar Thomas H. Johnson published The Poems of Emily Dickinson in 1955.

The Complete Poems of Emily Dickinson

Life, and Death, and Giants —

Some keep the Sabbath going to Church —

Because I could not stop for Death —

My Life had stood — a Loaded Gun —

This is my letter to the World

The Moon upon her fluent Route

Hope is a subtle Glutton —

I took one Draught of Life —

To Whom the Mornings stand for Nights,

More than the Grave is closed to me —

Could Hope inspect her Basis

Who has not found the Heaven — below —

A little Madness in the Spring

„A word is dead
When it is said,
Some say.

I say it just
Begins to live
That day.“

„Hope is the thing with feathers
That perches in the soul
And sings the tune without the words
And never stops at all.“

„To live is so startling it leaves little time for anything else.“

„The dearest ones of time, the strongest friends of the soul--BOOKS.“

„Saying nothing sometimes says the most.“

„The soul should always stand ajar, ready to welcome the ecstatic experience.“

„That it will never come again is what makes life so sweet.“

„Bring me the sunset in a cup.“

How dreary to be somebody!
How public, like a frog
To tell your name the livelong day
To an admiring bog!“

„If I can stop one heart from breaking, I shall not live in vain.“ 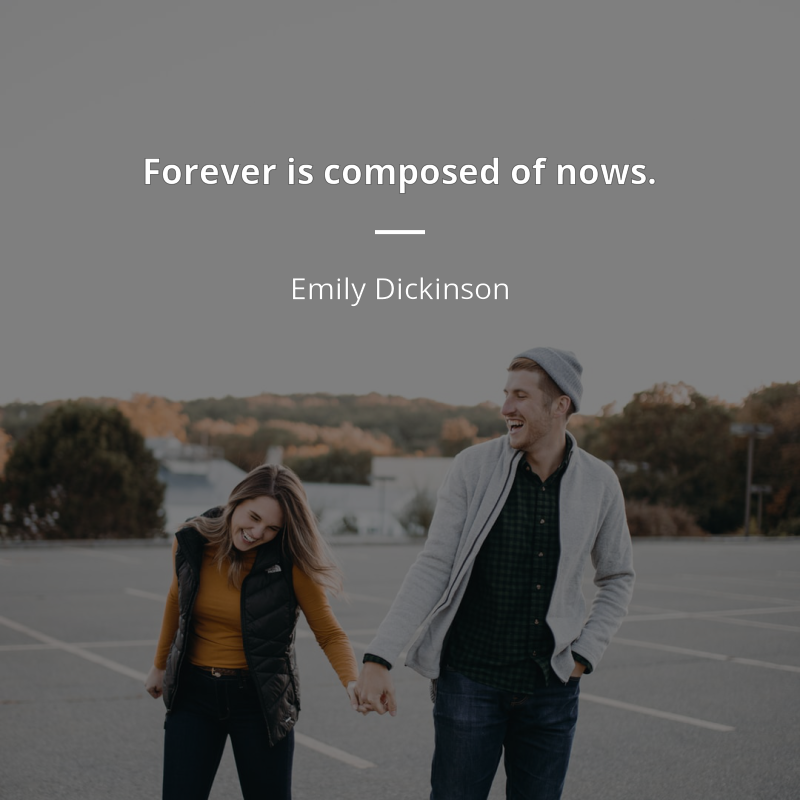 „Forever is composed of nows.“

„If I read a book and it makes my whole body so cold no fire can ever warm me, I know that is poetry.“

„Not knowing when the dawn will come
I open every door.“

„A little Madness in the Spring
Is wholesome even for the King.“

—  Emily Dickinson, A little Madness in the Spring

„Morning without you is a dwindled dawn.“

„Nature is a haunted house--but Art--is a house that tries to be haunted.“

Variant: Art is a house that tries to be haunted.Source: The Complete Poems of Emily Dickinson

„Beauty is not caused. It is.“