„I feel great. I feel absolutely fantastic. Chilled out, I feel like my IQ has gone up. I feel younger. It's a great feeling.“ 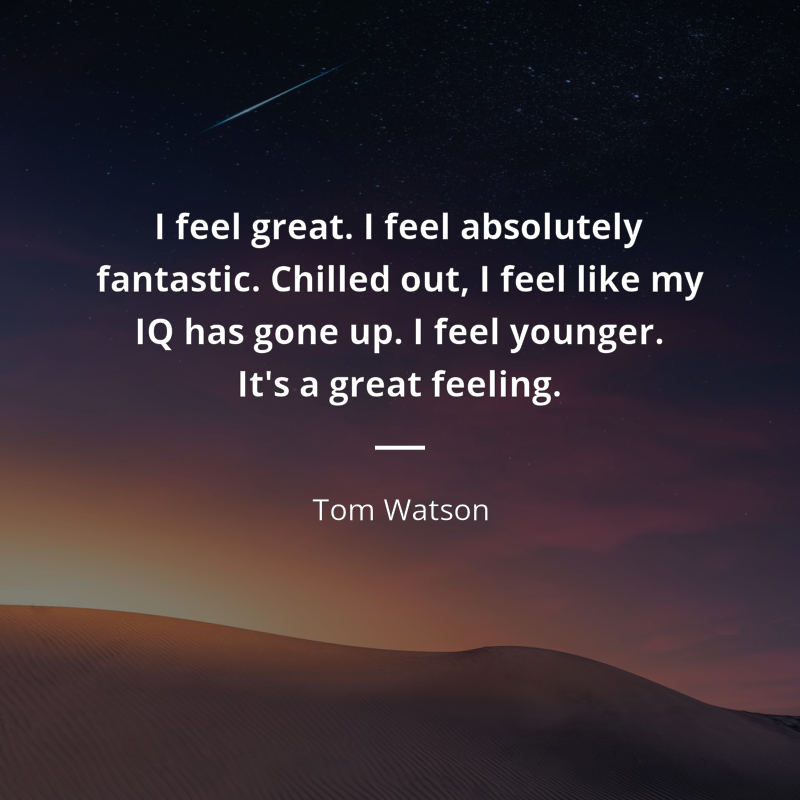 „The chill of what I won't feel gnaws at my present heart.“

Source: The Book of Disquiet

„I feel healthy! I feel happy I feel terrific“

Daily mantra for positive self-suggestion which he recommended in Success Through a Positive Mental Attitude (1960) and his teachings.

„I like to just feel how I feel and not worry about it really.“

„To be absolutely honest, what I feel really bad about is that I don't feel worse. There's the ineffectual liberal's problem in a nutshell.“

„I did not like this feeling of having feelings.“

„I'm putting up a great front, then because I feel like I'm breaking apart inside.“

„I live in a world of actors where everyone is a little crazy to begin with, but it was interesting that he said all these elements to this disorder. I was like, “Oh my gosh!” I feel like this will be a great challenge to play the role, but I can tap into that because I feel like I know someone with that disorder.“

From the "Making of Spin" on his, at the time, new solo careerSource: http://www.youtube.com/watch?v=QyAUD9PzCIg

Source: Trouble Is My Business

„I feel safe with him because he is so not my ideal and I feel like I can be myself because I'm not in love with him.“

„I do feel it gone,
But know not how it went“

Source: Memoirs of a Teenage Amnesiac

„I feel like my soul is aching for the country.“

Interview on Entertainment Tonight, as quoted in "Oprah Winfrey Offers Words of Wisdom in Wake of Deadly Las Vegas Shooting", KTVB (2 October 2017) http://www.ktvb.com/article/entertainment/entertainment-tonight/oprah-winfrey-offers-words-of-wisdom-in-wake-of-deadly-las-vegas-shooting-exclusive/480587423Context: I feel like my soul is aching for the country. … There's not a day that goes by where I'm not putting on my shoes, or brushing my teeth, where I just think about the ordinariness of, people who just went to a concert, or the ordinariness of the day from people from 9/11, who were just doing an ordinary thing, and then you never get home. … So, I would say that these days of crisis and tragedy are to remind us all to be present in the ordinariness of our lives, that actually turns out to be extraordinary, when the person you love doesn't come home at night.
I pay attention to things, you know? … This is to make us all more awakened about our own life, and the fact that it shows up this way is a horror. But, as I heard someone say, seeing people coming together, helping each other — whether it's this crisis we're in or what we saw weeks ago in, in Houston, in Florida, and now in Puerto Rico — it shows the humanity of us all. So, it's an opportunity to show the best of ourselves, when the worst shows up.

„I feel that the Godhead is broken up like the bread at the Supper, and that we are the pieces. Hence this infinite fraternity of feeling.“

Letter to Nathaniel Hawthorne (July 1851); published in Memories of Hawthorne (1897) by Rose Hawthorne Lathrop, p. 158Context: Whence came you, Hawthorne? By what right do you drink from my flagon of life? And when I put it to my lips — lo, they are yours and not mine. I feel that the Godhead is broken up like the bread at the Supper, and that we are the pieces. Hence this infinite fraternity of feeling. Now, sympathising with the paper, my angel turns over another leaf. You did not care a penny for the book. But, now and then as you read, you understood the pervading thought that impelled the book — and that you praised. Was it not so? You were archangel enough to praise the imperfect body, and embrace the soul.

„I mean I never feel I feel what I ought to feel.“

„Coming to grips with my past, it was hard. I don't feel like what I did was so evil, I just feel like the way I was living, and my mentality, was part of my progression to be a man.“

Posthumous attributions, Tupac: Resurrection (2003)Variant: I don't feel like what I did was so evil, I just feel like the way I was living and my mentality was a part of my progression to be a man.

„[Vegetarian lifestyle] made me feel great. I still feel young, totally healthy. I’ve fought in the sport for many years and I feel like it’s something that’s helped me tremendously. But I’ve never eaten meat, so I can’t compare the two and say, ‘This is what it does better.’ But all the people I know who have gone from eating meat to not eating meat say they feel much better.“

„Sometimes I feel like I’m actually on the wrong planet. It’s great when I’m in my garden, but the minute I go out the gate I think, ‘What the hell am I doing here?“