Phineas Taylor Barnum was an American politician, showman, and businessman remembered for promoting celebrated hoaxes and for founding the Barnum & Bailey Circus. Although Barnum was also an author, publisher, philanthropist, and for some time a politician, he said of himself, "I am a showman by profession...and all the gilding shall make nothing else of me", and his personal aim was "to put money in his own coffers". Barnum is widely, but erroneously, credited with coining the phrase "There's a sucker born every minute".

Born in Bethel, Connecticut, Barnum became a small-business owner in his early twenties, and founded a weekly newspaper, before moving to New York City in 1834. He embarked on an entertainment career, first with a variety troupe called "Barnum's Grand Scientific and Musical Theater", and soon after by purchasing Scudder's American Museum, which he renamed after himself. Barnum used the museum as a platform to promote hoaxes and human curiosities such as the Feejee mermaid and General Tom Thumb. In 1850 he promoted the American tour of singer Jenny Lind, paying her an unprecedented $1,000 a night for 150 nights. After economic reversals due to bad investments in the 1850s, and years of litigation and public humiliation, he used a lecture tour, mostly as a temperance speaker, to emerge from debt. His museum added America's first aquarium and expanded the wax-figure department. While in New York, he converted to Universalism and was a member of the Church of the Divine Paternity, now the Fourth Universalist Society in the City of New York.

Barnum served two terms in the Connecticut legislature in 1865 as a Republican for Fairfield. With the ratification of the Thirteenth Amendment to the United States Constitution over slavery and African-American suffrage, Barnum spoke before the legislature and said, "A human soul, ‘that God has created and Christ died for,’ is not to be trifled with. It may tenant the body of a Chinaman, a Turk, an Arab or a Hottentot – it is still an immortal spirit". Elected in 1875 as Mayor of Bridgeport, Connecticut, he worked to improve the water supply, bring gas lighting to streets, and enforce liquor and prostitution laws. Barnum was instrumental in starting Bridgeport Hospital, founded in 1878, and was its first president.

The circus business was the source of much of his enduring fame. He established "P. T. Barnum's Grand Traveling Museum, Menagerie, Caravan & Hippodrome", a traveling circus, menagerie and museum of "freaks", which adopted many names over the years. Barnum died in his sleep at home in 1891, and was buried in Mountain Grove Cemetery, Bridgeport, which he designed himself. 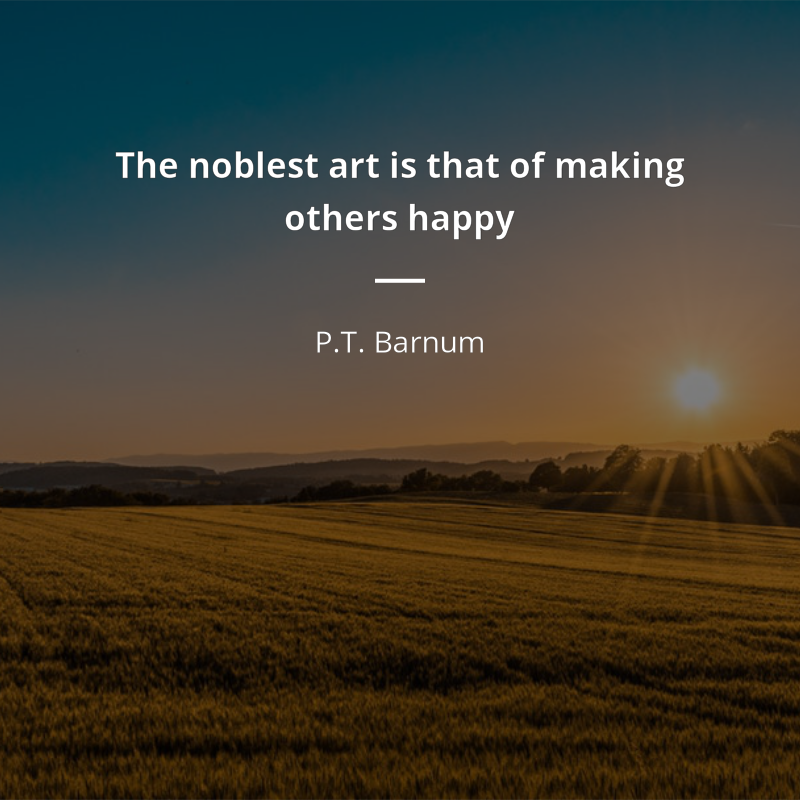 „The noblest art is that of making others happy“

„There's a sucker born every minute.“

Commonly attributed to Barnum, there is much testimony of contemporaries that he never actually said this, and in "P. T. Barnum Never Did Say "There's a Sucker Born Every Minute" http://www.historybuff.com/library/refbarnum.html R. J. Brown asserts that it actually originated with a banker named David Hannum, in reference to one of Barnum's hoaxes: a replica of the Cardiff Giant.Misattributed

„The best kind of charity is to help those who are willing to help themselves.“

Ch. 18: "Be charitable" http://www.fourmilab.ch/etexts/www/barnum/moneygetting/moneygetting_chap19.htmlArt of Money Getting (1880)

„Unless a man enters upon the vocation intended for him by nature, and best suited to his peculiar genius, he cannot succeed.“

„Nobody ever lost a dollar by underestimating the taste of the American public.“

„I am a showman by profession…and all the gilding shall make nothing else of me.“

„The plan of "counting the chickens before they are hatched" is an error of ancient date, but it does not seem to improve by age.“

Ch. 10: "Let hope predominate but be not too visionary" http://www.fourmilab.ch/etexts/www/barnum/moneygetting/moneygetting_chap11.htmlArt of Money Getting (1880)

„Let your motto then always be 'Excelsior', for by living up to it there is no such word as fail.“

Source: The Art of Money Getting

„The foundation of success in life is good health: that is the substratum fortune; it is also the basis of happiness. A person cannot accumulate a fortune very well when he is sick.“

Source: The Art of Money Getting: Golden Rules for Making Money

„Dr. Franklin says "it is the eyes of others and not our own eyes which ruin us. If all the world were blind except myself I should not care for fine clothes or furniture.“

Source: The Art of Money Getting; Or, Golden Rules for Making Money

„The desire for wealth is nearly universal, and none can say it is not laudable, provided the possessor of it accepts its responsibilities, and uses it as a friend to humanity.“

Ch. 20: "Preserve your integrity" http://www.fourmilab.ch/etexts/www/barnum/moneygetting/moneygetting_chap21.htmlArt of Money Getting (1880)

„Politeness and civility are the best capital ever invested in business.“

Ch. 17: "Be polite and kind to your customers" http://www.fourmilab.ch/etexts/www/barnum/moneygetting/moneygetting_chap18.htmlArt of Money Getting (1880)

„In fact, as a general thing, money-getters are the benefactors of our race.“

Ch. 20: "Preserve your integrity" http://www.fourmilab.ch/etexts/www/barnum/moneygetting/moneygetting_chap21.htmlArt of Money Getting (1880)

„But however mysterious is nature, however ignorant the doctor, however imperfect the present state of physical science, the patronage and the success of quacks and quackeries are infinitely more wonderful than those of honest and laborious men of science and their careful experiments.“

„Every crowd has a silver lining.“

Commonly attributed to Barnum without citation; such as in "Pardon My French: How a Grumpy American Fell in Love with France" https://books.google.com/books?id=bRYQCwAAQBAJ&pg=PT192&lpg=PT192&dq=who+said+always+keep+them+wanting+more+P.T.+Barnum&source=bl&ots=CVHbQiDHrL&sig=0_Dch_nOKrzDEQLXzu7R9u66ZQs&hl=en&sa=X&ved=0ahUKEwiU-sL-k_naAhWM44MKHWFICwwQ6AEIhAEwDQ by Allen JohnsonDisputed

„Money is in some respects like fire; it is a very excellent servant but a terrible master.“