Jerome John Garcia was an American singer-songwriter and guitarist, best known for his work as the lead guitarist and as a vocalist with the band the Grateful Dead, which came to prominence during the counterculture era in the 1960s. Although he disavowed the role, Garcia was viewed by many as the leader or "spokesman" of the group.

One of its founders, Garcia performed with the Grateful Dead for their entire thirty-year career . Garcia also founded and participated in a variety of side projects, including the Saunders–Garcia Band , the Jerry Garcia Band, Old and in the Way, the Garcia/Grisman acoustic duo, Legion of Mary, and the New Riders of the Purple Sage . He also released several solo albums, and contributed to a number of albums by other artists over the years as a session musician. He was well known for his distinctive guitar playing and was ranked 13th in Rolling Stone's "100 Greatest Guitarists of All Time" cover story.

Later in life, Garcia was sometimes ill because of his diabetes, and in 1986 went into a diabetic coma that nearly cost him his life. Although his overall health improved somewhat after that, he continued to struggle with longstanding heroin and cocaine addictions, and was staying in a California drug rehabilitation facility when he died of a heart attack in August 1995 at the age of 53. 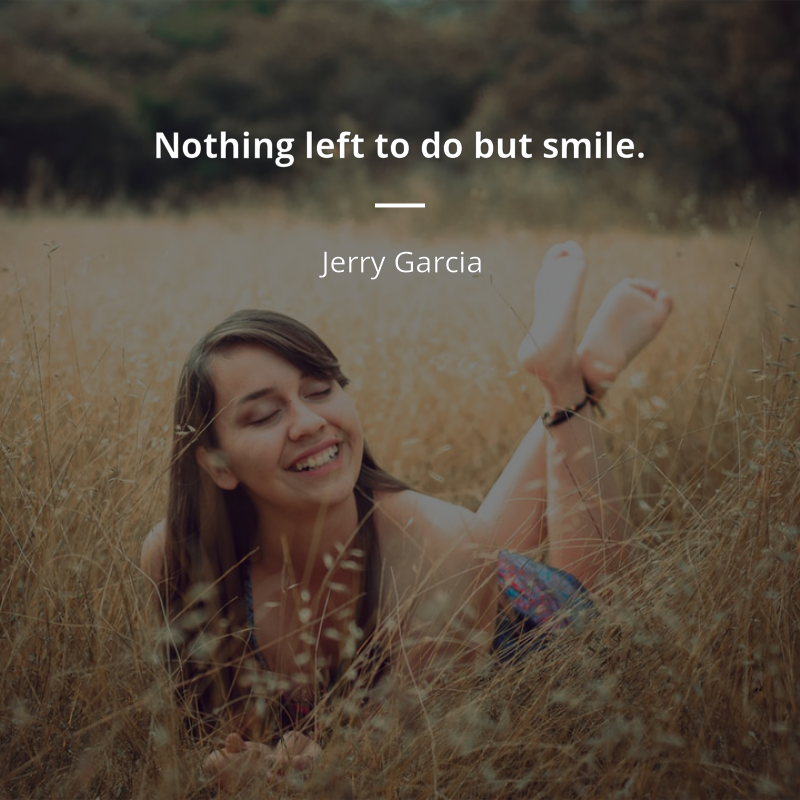 „Nothing left to do but smile.“

Source: The Wisdom of Jerry Garcia

„What a long strange trip it's been.“

„once in awhile you get shown the light, in the strangest of places if you look it right“

„If the thunder don't get ya then the lightning will.“

„Sometimes the lights all shining on me, other times I can barely see. Lately it occurs to me what a long strange trip it's been.“

„I read somewhere that 77 percent of all the mentally ill live in poverty. Actually, I'm more intrigued by the 23 percent who are apparently doing quite well for themselves.“

„The sun will shine in my back door one day..“

„Done time in the lock-up, done time on the streets. Done time on the upswing, and time in defeat. I know what I'm askin'. I know it's a lot. Just to say that I love you. Believe it or not.“

live life expecting the worst, hoping for the best, and living for the future!

Somebody has to do something, and it's just incredibly pathetic that it has to be us.“