Jeremy Charles Robert Clarkson is an English broadcaster, journalist and writer who specialises in motoring. He is best known for co-presenting the BBC TV show Top Gear with Richard Hammond and James May from October 2002 to March 2015. He also writes weekly columns for The Sunday Times and The Sun.

From a career as a local journalist in northern England, Clarkson rose to public prominence as a presenter of the original format of Top Gear in 1988. Since the mid-1990s, he has become a recognised public personality, regularly appearing on British television presenting his own shows and appearing as a guest on other shows. As well as motoring, Clarkson has produced programmes and books on subjects such as history and engineering. From 1998 to 2000, he also hosted his own chat show, Clarkson.

His opinionated but humorous tongue-in-cheek writing and presenting style has often provoked public reaction. His actions both privately and as a Top Gear presenter have also sometimes resulted in criticism from the media, politicians, pressure groups and the public. He also has a significant public following, being credited as a major factor in the resurgence of Top Gear as one of the most popular shows on the BBC.

On 25 March 2015, the BBC announced it would not renew Clarkson's contract after he verbally and physically attacked a Top Gear producer over a dispute at a hotel while filming on location. In mid-2015 Clarkson, Hammond, May and producer Andy Wilman formed production company W. Chump & Sons to produce The Grand Tour for Amazon Video.

Born to be Riled

„It is almost impossible to win a VC. In the hundred-and-fifty years since it was created, the number of British and Commonwealth troops who've seen action is in the tens of millions, but only 1,351 of them have been awarded the Victoria Cross. The chances of surviving a VC action are just one in ten, but if you do survive, the medal can never be taken away from you. You can go to the gallows wearing it. And no matter how many letters you have after your name, VC always comes first.“ 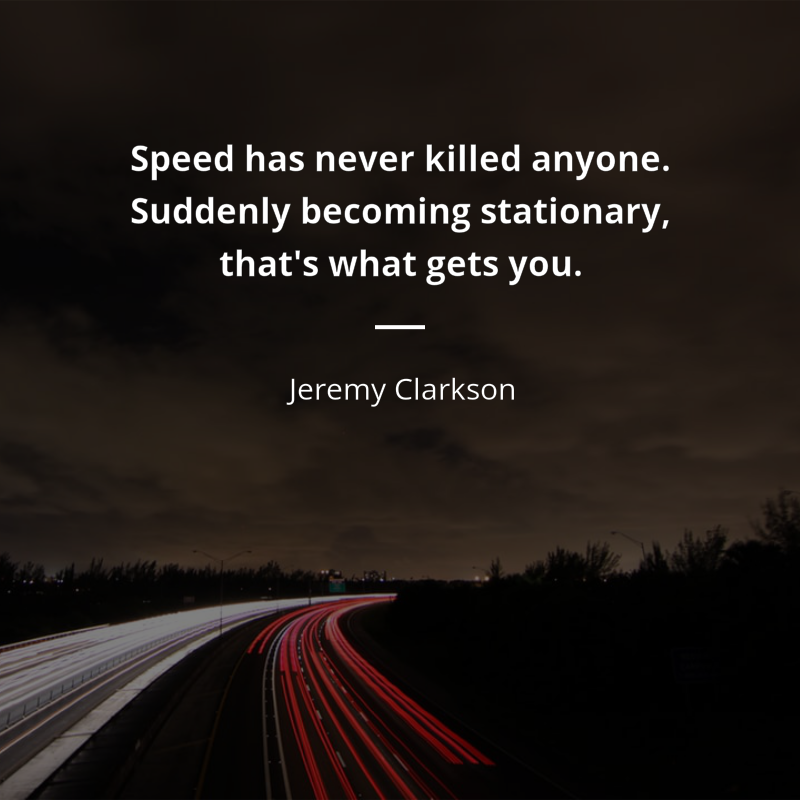 „Speed has never killed anyone. Suddenly becoming stationary, that's what gets you.“

Variant: Speed has never killed anyone, suddenly becoming stationary… that’s what gets you.

„They were out of ideas after just five miles. The Royal Navy vessel had approached unseen, fired unseen, and simply disappeared“

I Know You Got Soul (2004)Context: When the Argentine light cruiser Belgrano was hit by two torpedoes from the snout of Conqueror, a British hunter-killer, the enemy escort ships immediately gave chase. They were out of ideas after just five miles. The Royal Navy vessel had approached unseen, fired unseen, and simply disappeared.

„Cars are some of the most intoxicating, most beautiful things ever forged by mankind.“

Voice-over introduction to Forza Motorsport 5 (2013)Context: Cars. To some, they're just transport. A convenient alternative to highly-flammable dirigibles or walking. But you- you understand that cars are far more than this. They are our history. They mark the moments by which we define decades. Cars are some of the most intoxicating, most beautiful things ever forged by mankind. They represent the glory of technology, the essence of freedom, and have been the weapons in some of our most gripping sporting battles. They grip us, they cheer us on, they hold us up as heroes. So this is about the love of all things four-wheeled and fast. This is a shrine to power, to speed, to metal made beautiful. This is where dreams are driven. Welcome to Forza.

„If you are clinically insane, by which I mean you wake up in the morning, and you think you are an onion, this is your car, (about the BMW X3).“

„The Alfa Romeo GTV6 had the worst gearbox I've ever encountered, and the worst driving position and the worst record for reliability. Nevertheless, I bought one. I knew it was a hopeless basket case but I'd become smitten by the noise its engine made: a rumble in the jungle at low revs and almost an eerie howl as it neared the red line. I would put up with the massive bouts of truculence, the deep discomfort and the absurdly heavy steering because no car before, or since, has ever made such a glorious sound. It was music to the enthusiast's ears, like a cross between 'Ode to Joy' and 'Nessun Dorma.“

„What foreigners like most about Britain is not multiculturalism or tolerance or any of that new Labour nonsense. No, what they like is our history. Shakespeare. Blenheim Palace. Soldiers in preposterous hats who don't move. Yes, they may go and see some dead dogs in a modern art gallery but that's only because they've spent the morning on top of a sightseeing bus and they're freezing.“

„Then there's power. There was a time when people cooed over Ferraris that developed 200 horsepower, whereas today 2.0 litre Escorts can manage that. It's almost impossible to buy a car that won't do a hundred. (If you really want one, various Mercedes diesels make a pretty good stab at it.) Then there's the environment. The Volkswagen Beetle could kill a rain forest at 400 paces whereas today's Golf trundles around with tulips coming out of its exhaust. The gas coming out of a Sab is actually cleaner than the air that went in. That's true, that is.“

„You really could call the new TVR Cerbera heavy metal were it not fashioned from plastic. The best way to experience this car is to be about seven miles away. As it comes toward you, it's like being in a horror movie. The monster is getting closer. The Thing. The Blob. Terror has no shape. But God, what a noise.“

„There is, however, one car company that has never lost sight of its role in the marketplace. Rolls-Royce. Sir Henry Royce, who founded the company back in 1904, really was a one-man quote machine. "Strive for perfection in everything you do." "Accept nothing as nearly right or good enough." "The quality remains long after the price is forgotten."“

„It's no more daunting in there than in a Georgian drawing room. You sit on a supremely comfortable chair- it'd be even better if it were a wingback, I'm surprised it's not- overlooking acres of leather and wood. You're never tempted, as you are in a Maybach, to push a button just to find out what it does. And then having to spend the rest of the journey trying to find which button undoes whatever the first button did. This makes for a hugely relaxing drive. So relaxing, in fact, that you sometimes forget that you're in a car. I did.“

„There's one other thing too. No car can truly be great unless it's a Ferrari.“

„You get the picture. And so did BMW. When they bought the company they could have fitted a new body to one of their 7 Series. That's what Mercedes did to create the Maybach. But instead of wandering around the BMW spare-parts division saying, "What do we want?" the engineers fired up their computers and asked, "What do we need?". Plainly they looked at what Henry Royce and Charles Rolls were trying to achieve a hundred years ago, and thought, "Zis is vot ve must do also."“

And as a result the Rolls-Royce Phantom is quite simply the best car in the world.Rolls-Royce, p. 24I Know You Got Soul (2004)

„You know, we've a rather warped sense of what constitutes bravery these days. I mean, even David Beckham is called a hero for scoring a penalty. But when you look at VC winners and hear their stories… well, enough said.“

„In the last couple of weeks everyone has been asking how on earth the greatest and most powerful nation on earth could be so crippled by a bit of wind and rain.
The rest of the world has natural disasters without the whole of society faling to pieces. So why is it different in America?
Well, if you stop and think about it, the answer is obvious.
America may have given the world the space shuttle and, er, condensed milk, but behind the veneer of civilisation most Americans barely have the brains to walk on their back legs.“

„The fact is simple. The Spitfire looked good. It was every bit as dashing as the young men who flew it, and in flight it was as graceful as any bird. Its progress through the sky seemed effortless, as though it was simply riding the breeze and its Merlin engine was only there to provide a suitable soundtrack. You had Mr. Churchill on the radio explaining that we'd never surrender, and above you had the Spitfire, and you couldn't help thinking: Yes, we can win this thing. Possibly, just possibly, the Spitfire is the greatest machine ever made.“

„Then there’s the styling. Or rather, there isn’t. Any attempt to give these cars a tapering roofline or a curved rear end is wasteful of precious capacity, which means all of them look exactly – and I mean exactly – like chest freezers. And because they have such tiny wheels they actually look like chest freezers on casters. And that in turn means they look absurd.“