Frida Kahlo de Rivera was a Mexican painter, who mostly painted self-portraits. Inspired by Mexican popular culture, she employed a naïve folk art style to explore questions of identity, postcolonialism, gender, class, and race in Mexican society. Her paintings often had strong autobiographical elements and mixed realism with fantasy. In addition to belonging to the post-revolutionary Mexicanidad movement, which sought to define a Mexican identity, Kahlo has been described as a surrealist or magical realist. Her work has been celebrated internationally as emblematic of Mexican national and indigenous traditions, and by feminists for what is seen as its uncompromising depiction of the female experience and form.

Born to a German father and a mestiza mother, Kahlo spent most of her childhood and adult life at her family home, La Casa Azul, in Coyoacán. She was left disabled by polio as a child, and at the age of eighteen was seriously injured in a traffic accident, which caused her pain and medical problems for the rest of her life. Prior to the accident, she had been a promising student headed for medical school, but in the aftermath had to abandon higher education. Although art had been her hobby throughout her childhood, Kahlo began to entertain the idea of becoming an artist during her long recovery. She was also interested in politics and in 1927 joined the Mexican Communist Party. Through the Party, she met the celebrated muralist Diego Rivera. They were married in 1928, and remained a couple until Kahlo's death. The relationship was volatile due to both having extramarital affairs; they divorced in 1939, but remarried the following year.

Kahlo spent the late 1920s and early 1930s traveling in Mexico and the United States with Rivera who was working on commissions. During this time, she developed her own style as an artist, drawing her main inspiration from Mexican folk culture and painting mostly small self-portraits, which mixed elements from pre-Columbian and Catholic mythology. Although always overshadowed by Rivera, her paintings raised the interest of Surrealist artist André Breton, who arranged for her to have her first solo exhibition at the Julien Levy Gallery in New York in 1938. The exhibition was a success and was followed by another in Paris in 1939. While the French exhibition was less successful, the Louvre purchased a painting from Kahlo, making her the first Mexican artist to be featured in their collection.

Throughout the 1940s, Kahlo continued to participate in exhibitions in Mexico and the United States. She also began to teach at the Escuela Nacional de Pintura, Escultura y Grabado "La Esmeralda", and became a founding member of the Seminario de Cultura Mexicana. Kahlo's always fragile health began to increasingly decline in the same decade. She had her first solo exhibition in Mexico in 1953, shortly before her death the following year at the age of 47.

Kahlo was mainly known as Rivera's wife until the late 1970s, when her work was rediscovered by art historians and political activists. By the 1990s, she had become not only a recognized figure in art history, but also regarded as an icon for Chicanos, feminists, and the LGBTQ movement.

„I think that little by little I'll be able to solve my problems and survive.“ 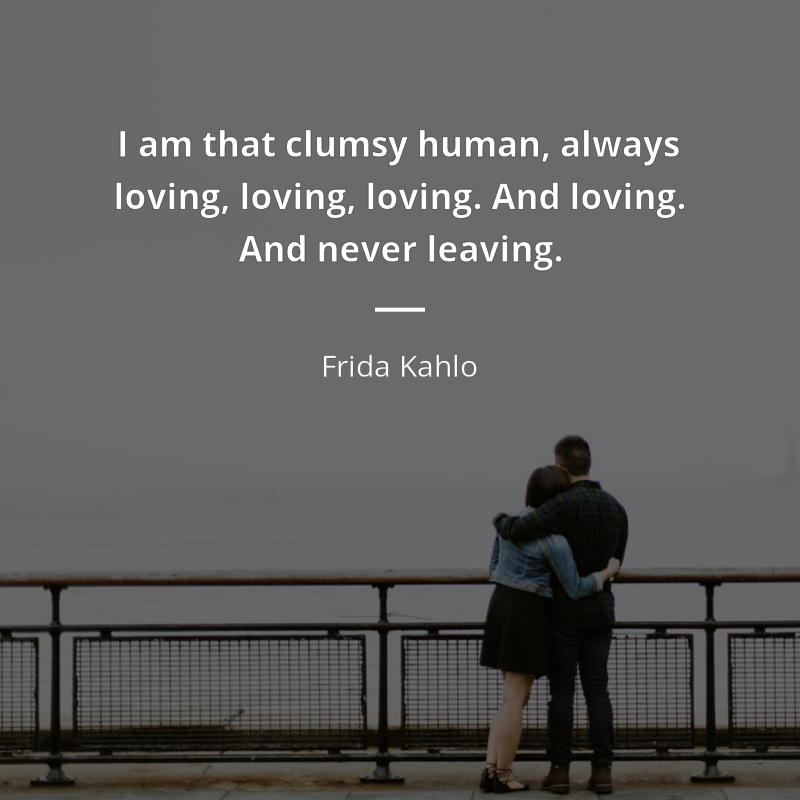 „Wordless,
Infinite —
You.
You intensify
everything.
You are
fire
burning
all that
is left
of my
heart.“

„Take a lover who looks at you like maybe you are magic.“

Variant: Take a lover who looks at you like maybe you are a bourbon biscuit.

„What I wanted to express very clearly and intensely was that the reason these people had to invent or imagine heroes and gods is pure fear. Fear of life and fear of death.“

„People in general are scared to death of the war and all the exhibition have been a failure, because the rich - don't want to buy anything“

„I leave you my portrait so that you will have my presence all the days and nights that I am away from you.“

„Only one mountain can know the core of another mountain.“

Source: The Diary of Frida Kahlo: An Intimate Self-Portrait

„I love you more than my own skin and even though you don’t love me the same way, you love me anyways, don’t you? And if you don’t, I’ll always have the hope that you do, and i’m satisfied with that. Love me a little. I adore you.“

„I was really ugly [circa 8 a 10 years old] and had an admiration complex for Christi [her beautiful sister]. They sent us tot the ous of senora Maria a Campos for instruction... I asked about the mysteries of the Bible, and I think I behaved badly so they sent me to a retreat. It was the usual thing: "to dedicate oneself mor to God".... it was a house where one spent about fifteen days... I asked the priest so many questions about how Christ was born, and was the virgin really a virgin, that they threw me out.“

„The most important thing for everyone in Gringolandia is to have ambition and become 'somebody,' and frankly, I don't have the least ambition to become anybody.“

„They thought I was a Surrealist, but I wasn't. I never painted dreams. I painted my own reality.“

„I drank because I wanted to drown my sorrows, but now the damned things have learned to swim.“

„Feet, what do I need them for
If I have wings to fly.“

„I tried to drown my sorrows, but the bastards learned how to swim, and now I am overwhelmed by this decent and good feeling.“

Variant: I drank because I wanted to drown my sorrows. But now the damned things have learned to swim, and now decency and good behavior weary me.

„Nothing is worth more than laughter. It is strength to laugh and to abandon oneself, to be light. Tragedy is the most ridiculous thing.“

„I paint my own reality. The only thing I know is that I paint because I need to, and I paint whatever passes through my head without any other consideration.“

„I hope the exit is joyful and I hope never to return.“

„I paint flowers so they will not die.“