„The reason I talk to myself is because I’m the only one whose answers I accept.“ 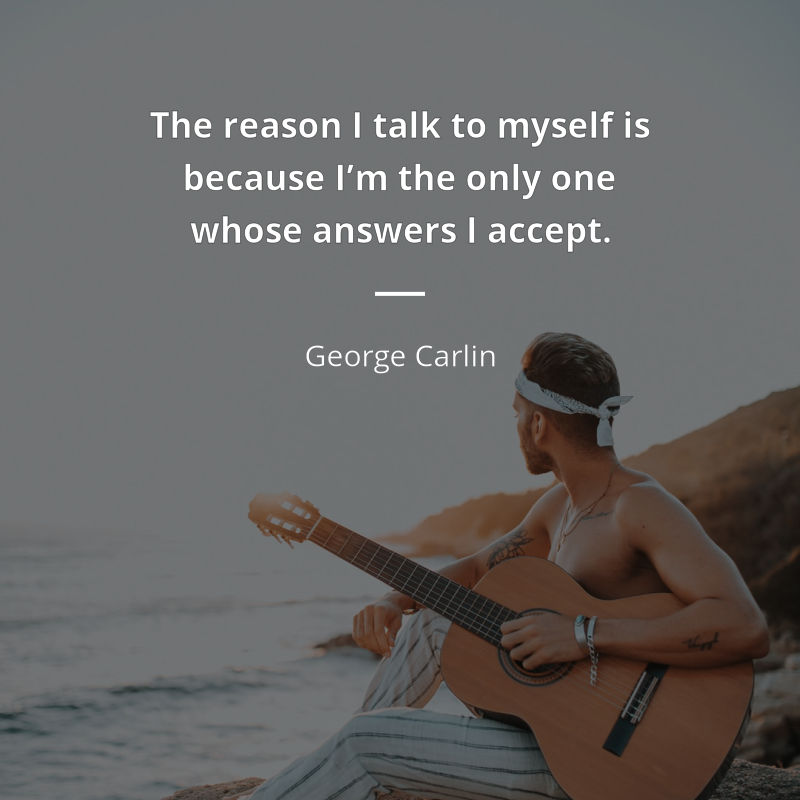 „We talk to these folks because they potentially have the best answers, so I know whose ass to kick.“

„I don’t want to be full of myself. I really have fun when I’m working, and I don’t want to not have fun when I’m working, because I’m trying to convince myself that I’m ‘somebody’. I don’t like it, and I don’t enjoy other people who are like that. And that’s one of the reasons why doing smaller-budget stuff is really good. You don’t run into that so much…“

„I suppose I’m the one responsible for destroying myself.“

„I was looking for myself and asking everyone except myself questions which I, and only I, could answer.“

Source: Invisible Man (1952), Chapter 1.Context: All my life I had been looking for something, and everywhere I turned someone tried to tell me what it was. I accepted their answers too, though they were often in contradiction and even self-contradictory. I was naïve. I was looking for myself and asking everyone except myself questions which I, and only I, could answer. It took me a long time and much painful boomeranging of my expectations to achieve a realization everyone else appears to have been born with: That I am nobody but myself.

„I’m not going to die because I failed as someone else. I’m going to succeed as myself.“

And I'm gonna stay here and rock the mike until the next Korean-American, fag hag, shit starter, girl comic, trash talker comes up and takes my place!From Her Tours and CDs, I'm The One That I Want Tour

„I dislike talk of the Gods, who taunt us with their promises, and whose disappointments we must always accept.“

„I’m breaking my attachment to physical power and possessions, because only through destroying myself can I discover the greater power of my spirit.“

„God knows, I’m hardly a sociologist. But I hope in the future for some form of reconciliation. Because I think all men are guilty. I’m not talking about rape and pillage. I’m not talking about Harveyesque. I’m talking about all of the spectrum. From an aggressive flirt. Or even just a flirty-flirt that has one sour note in it. Or what I think every man was guilty of, some form of omission in attitude, in his views. Are we really going to have only capital punishment? Because right now, that’s what we have. You get accused, you’re obliterated. Charlie Rose ceases to exist.“

„You’re saying God is all made up, but okay, who cares? People say, “I can’t pray because I feel like I’m talking to myself.” The rabbi would say, “Pray! That’s so good. Go talk to yourself.”“

„I don't know if I'm making myself clear, but if I were to accept this business of conceptual art I would have no reason to exist.“

„Why can’t the world hear? I ask myself. Within a few moments I ask it many times. Because it doesn’t care, I finally answer, and I know I’m right. It’s like I’ve been chosen. But chosen for what? I ask.“

Source: I Am the Messenger

„“Peewee!” I said sharply. “You're not listening.”
“What were you doing talking,” she answered reasonably, “when I wasn’t listening?”“

„I know that love is ultimately the only answer to mankind's problems. And I'm going to talk about it everywhere I go.“

1960s, Where Do We Go from Here: Chaos or Community? (1967)Context: I know that love is ultimately the only answer to mankind's problems. And I'm going to talk about it everywhere I go. I know it isn't popular to talk about it in some circles today. I'm not talking about emotional bosh when I talk about love, I'm talking about a strong, demanding love. And I have seen too much hate. I've seen too much hate on the faces of sheriffs in the South. I've seen hate on the faces of too many Klansmen and too many White Citizens Councilors in the South to want to hate myself, because every time I see it, I know that it does something to their faces and their personalities and I say to myself that hate is too great a burden to bear. I have decided to love. If you are seeking the highest good, I think you can find it through love. And the beautiful thing is that we are moving against wrong when we do it, because John was right, God is love. He who hates does not know God, but he who has love has the key that unlocks the door to the meaning of ultimate reality.

„I have trouble actually describing myself because I’m always suspicious of people who start describing themselves.“

As quoted in " Zooey sings! http://detroit.metromix.com/music/article/zooey-sings/517858/content" by Matt Pais in Metromix (21 July 2008).Context: I have trouble actually describing myself because I’m always suspicious of people who start describing themselves. I’m like, “OK, why are you trying to tell me what you are?”

„My immediate consciousness, my absolute perception, cannot go beyond myself, — I have immediate knowledge only of myself, whatever I know further I know only by reasoning, in the same manner in which I have come to those conclusions concerning the original powers of Nature, which certainly do not lie within the circle of my perceptions. I, however, — that which I call myself, — am not the man-forming power of Nature, but only one of its manifestations; and only of this manifestation am I conscious, not of that power, whose existence I have only discovered from the necessity of explaining my own.“

„Who am I to talk? That’s a fair question, and one which deserves a better answer than I can give you.“

Source: How to Become President (1940), Ch. 1 : Government jobs pay big moneyContext: Who am I to talk? That’s a fair question, and one which deserves a better answer than I can give you. … Come to think of it, who are you? Whoever you are, I sympathize with you. I sympathize with everybody; that’s what I get for being a candidate myself. Let them call us nonentities. Who cares? A nonenitiy can be just as famous as anybody else if enough people know about him.
But let’s leave personalities out of this and just talk about me.

„Many people talk as if they have all the answers, whereas I know I don't. That's probably why no one listens to me.“