Timothy Walter Burton is an American film director, producer, artist, writer, and animator. He is known for his dark, gothic, eccentric, and quirky fantasy films such as Beetlejuice , Edward Scissorhands , the animated musical The Nightmare Before Christmas , the biographical film Ed Wood , the horror fantasy Sleepy Hollow , and later efforts such as Corpse Bride , Sweeney Todd: The Demon Barber of Fleet Street , Dark Shadows , and Frankenweenie . He is also known for blockbusters such as the adventure comedy Pee-wee's Big Adventure , the superhero films Batman and its first sequel Batman Returns , the sci-fi film Planet of the Apes , the fantasy drama Big Fish , the musical adventure film Charlie and the Chocolate Factory , and the fantasy film Alice in Wonderland , which garnered a worldwide gross of over $1 billion.

Burton has worked repeatedly with Johnny Depp, who has become a close friend of Burton since their first film together. He has also worked with musician Danny Elfman, who has composed scores for all but three of the films Burton has directed. Actress Helena Bonham Carter, Burton's former domestic partner, has appeared in many of his films. He also wrote and illustrated the poetry book The Melancholy Death of Oyster Boy & Other Stories, published in 1997 by Faber and Faber, and a compilation of his drawings, sketches and other artwork, entitled The Art of Tim Burton, was released in 2009. A follow-up to The Art of Tim Burton, entitled The Napkin Art of Tim Burton: Things You Think About in a Bar, containing sketches made by Burton in napkins at bars and restaurants he occasionally visits, was released in 2015. Both compilations were published by Steeles Publishing.

„I've always been misrepresented. You know, I could dress in a clown costume and laugh with the happy people but they'd still say I'm a dark personality.“

„I never really got nightmares for movies. I was much more terrified by my own family and real life, you know?“

„Visions are worth fighting for. Why spend your life making someone else's dreams?“

„I am not a dark person and I don't consider myself dark.“

„I'm not crazy, my reality is just different than yours.“

„For some of us, Halloween is everyday.“

„Son, are you happy?
I don't mean to pry,
but do you dream of Heaven?
Have you ever wanted to die?“

Source: The Melancholy Death of Oyster Boy and Other Stories

„Certain things leave you in your life and certain things stay with you. And that's why we're all interested in movies- those ones that make you feel, you still think about. Because it gave you such an emotional response, it's actually part of your emotional make-up, in a way.“

„I have a problem when people say something's real or not real, or normal or abnormal. The meaning of those words for me is very personal and subjective. I've always been confused and never had a clearcut understanding of the meaning of those kinds of words.“

„Mad Matter: "Have I gone mad?"
Alice: "I'm afraid so. You're entirely bonkers. But I'll tell you a secret. All the best people are.“

Source: Alice in Wonderland: Based on the Motion Picture Directed by Tim Burton 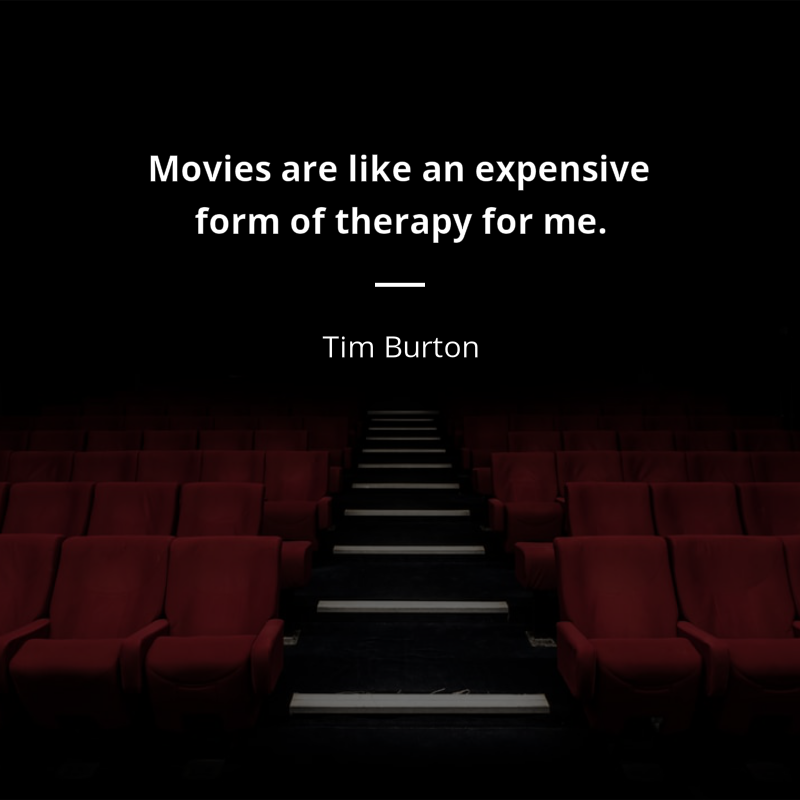 „Movies are like an expensive form of therapy for me.“

„I am the shadow on the moon at night/Filling your dreams to the brim with fright.“

„The Girl With Many Eyes
One day in the park
I had quite a surprise.
I met a girl
who had many eyes.

She was really quite pretty
(and also quite shocking!)
and I noticed she had a mouth,
so we ended up talking.

We talked about flowers,
and her poetry classes,
and the problems she'd have
if she ever wore glasses.

It's great to know a girl
who has so many eyes,
but you really get wet
when she breaks down and cries.“

„We all know interspecies romance is weird.“

But could a flame ever burn
for a match and a stick?
It did quite literally;
he burned up quick.“

Source: The Melancholy Death of Oyster Boy and Other Stories

„Everything in this room is edible. Even I'm edible. But, that would be called canibalism. It is looked down upon in most societies.“

Source: Charlie and the Chocolate Factory

„One person's craziness is another person's reality.“

Variant: One person's crazyness is another person's reality

Source: Charlie and the Chocolate Factory

„You're entirely bonkers. But I'll tell you a secret. All the best people are.“

Source: Alice in Wonderland: Based on the Motion Picture Directed by Tim Burton