Pierre Bourdieu was a French sociologist, anthropologist, philosopher and public intellectual.Bourdieu's work was primarily concerned with the dynamics of power in society, especially the diverse and subtle ways in which power is transferred and social order is maintained within and across generations. In conscious opposition to the idealist tradition of much of Western philosophy, his work often emphasized the corporeal nature of social life and stressed the role of practice and embodiment in social dynamics. Building upon the theories of Martin Heidegger, Ludwig Wittgenstein, Maurice Merleau-Ponty, Edmund Husserl, Georges Canguilhem, Karl Marx, Gaston Bachelard, Max Weber, Émile Durkheim, Claude Lévi-Strauss, Erwin Panofsky and Marcel Mauss among others, his research pioneered novel investigative frameworks and methods, and introduced such influential concepts as cultural, social, and symbolic forms of capital , the cultural reproduction, the habitus, the field or location, and symbolic violence. Another notable influence on Bourdieu was Blaise Pascal, after whom Bourdieu titled his Pascalian Meditations. Bourdieu's major contributions to the sociology of education, the theory of sociology, and sociology of aesthetics have achieved wide influence in several related academic fields , popular culture, and the arts.

Bourdieu's best known book is Distinction: A Social Critique of the Judgment of Taste . The book was judged the sixth most important sociological work of the twentieth century by the International Sociological Association. In it, Bourdieu argues that judgments of taste are related to social position, or more precisely, are themselves acts of social positioning. His argument is put forward by an original combination of social theory and data from quantitative surveys, photographs and interviews, in an attempt to reconcile difficulties such as how to understand the subject within objective structures. In the process, he tried to reconcile the influences of both external social structures and subjective experience on the individual .

The Logic of Practice

„Every established order tends to produce (to very different degrees with different means) the naturalization of its own arbitrariness.“

„The most successful ideological effects are those which have no need of words, and ask no more than complicitous silence“ 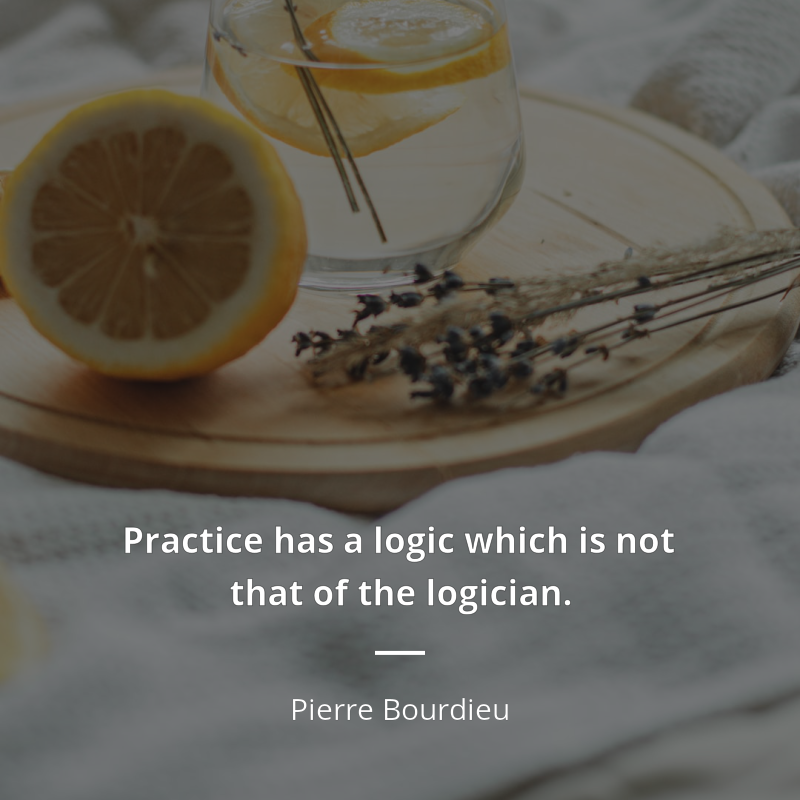 „Practice has a logic which is not that of the logician.“

„Male domination is so rooted in our collective unconscious that we no longer even see it.“

„The mind is a metaphor of the world of objects which is itself but an endless circle of mutually reflecting metaphors.“

„Pierre Bourdieu, a French sociologist, observed that elites in a society typically maintain their power not simply by controlling the means of production (ie money), but by dominating the cultural discourse too (ie a society’s intellectual map). And what is most important in relation to that cognitive map is not what is overtly stated and discussed – but what is left unstated, or ignored.“

„I often say that sociology is a martial art, a means of self-defense. Basically, you use it to defend yourself, without having the right to use it for unfair attacks.“

„The point of my work is to show that culture and education aren't simply hobbies or minor influences.“

„If the sociologist has a role, it is probably more to furnish weapons than to give lessons.“

„Television enjoys a de facto monopoly on what goes into the heads of a significant part of the population and what they think.“

„By making social hierarchies and the reproduction of these hierarchies appear based upon the hierarchy of ‘gifts’, merits, or skill established and ratified by its sanctions, or, in a word, by converting social hierarchies into academic hierarchies, the educational system fulfils a function of legitimation which is more and more necessary to the perpetuation of the ‘social order’ as the evolution of the power relationship between classes tends more completely to exclude the imposition of a hierarchy based upon the crude and ruthless affirmation of the power relationship.“

„The practical mastery of the logic or of the imminent necessity of a game — a mastery acquired by experience of the game, and one which works outside conscious control and discourse (in the way that. for instance, techniques of the body do).“