Michael Jeffrey Jordan , also known by his initials, MJ, is an American retired professional basketball player, businessman, and principal owner and chairman of the Charlotte Hornets of the National Basketball Association . Jordan played 15 seasons in the NBA for the Chicago Bulls and Washington Wizards. His biography on the NBA website states: "By acclamation, Michael Jordan is the greatest basketball player of all time." Jordan was one of the most effectively marketed athletes of his generation and was considered instrumental in popularizing the NBA around the world in the 1980s and 1990s.

Jordan played three seasons for coach Dean Smith at the University of North Carolina. As a freshman, he was a member of the Tar Heels' national championship team in 1982. Jordan joined the Bulls in 1984 as the third overall draft pick. He quickly emerged as a league star, entertaining crowds with his prolific scoring. His leaping ability, demonstrated by performing slam dunks from the free throw line in slam dunk contests, earned him the nicknames Air Jordan and His Airness. He also gained a reputation for being one of the best defensive players in basketball. In 1991, he won his first NBA championship with the Bulls, and followed that achievement with titles in 1992 and 1993, securing a "three-peat". Although Jordan abruptly retired from basketball before the beginning of the 1993–94 NBA season and started a new career playing minor league baseball, he returned to the Bulls in March 1995 and led them to three additional championships in 1996, 1997, and 1998, as well as a then-record 72 regular-season wins in the 1995–96 NBA season. Jordan retired for a second time in January 1999, but returned for two more NBA seasons from 2001 to 2003 as a member of the Wizards.

Jordan's individual accolades and accomplishments include five Most Valuable Player Awards, ten All-NBA First Team designations, nine All-Defensive First Team honors, fourteen NBA All-Star Game appearances, three All-Star Game MVP Awards, ten scoring titles, three steals titles, six NBA Finals MVP Awards, and the 1988 NBA Defensive Player of the Year Award. Among his numerous accomplishments, Jordan holds the NBA records for highest career regular season scoring average and highest career playoff scoring average . In 1999, he was named the greatest North American athlete of the 20th century by ESPN, and was second to Babe Ruth on the Associated Press's list of athletes of the century. Jordan is a two-time inductee into the Basketball Hall of Fame, having been enshrined in 2009 for his individual career, and again in 2010 as part of the group induction of the 1992 United States men's Olympic basketball team . He became a member of the FIBA Hall of Fame in 2015.

Jordan is also known for his product endorsements. He fueled the success of Nike's Air Jordan sneakers, which were introduced in 1985 and remain popular today. Jordan also starred in the 1996 film Space Jam as himself. In 2006, he became part-owner and head of basketball operations for the then-Charlotte Bobcats, buying a controlling interest in 2010. In 2015, Jordan became the first billionaire NBA player in history as a result of the increase in value of NBA franchises. He is the third-richest African-American, behind Oprah Winfrey and Robert F. Smith. 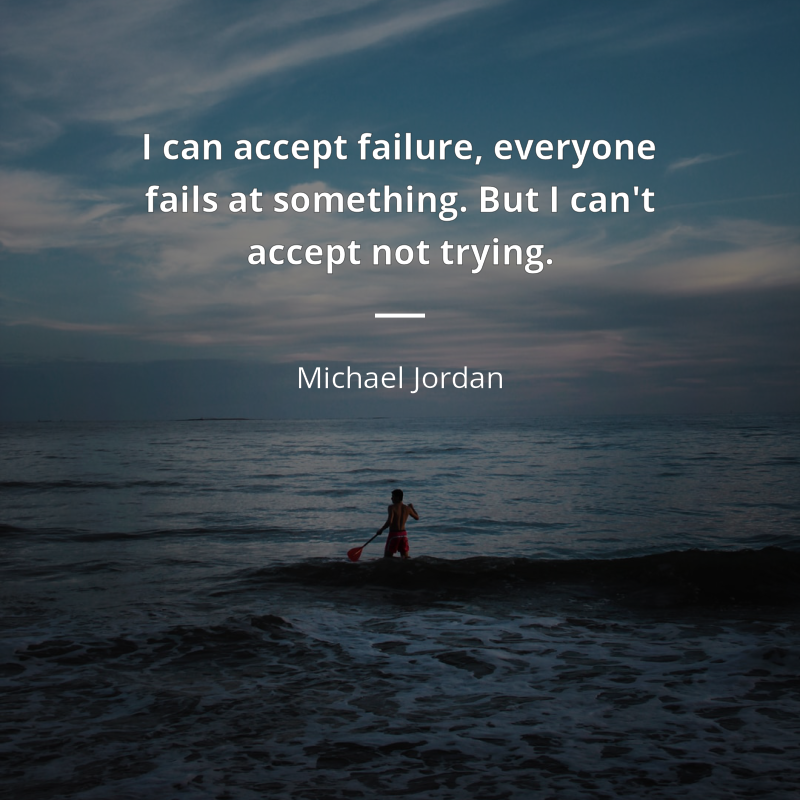 „I can accept failure, everyone fails at something. But I can't accept not trying.“

Variant: I can appect failure, but I cannot accept not trying.

Jordan, Michael. I Can't Accept Not Trying : Michael Jordan on the Pursuit of Excellence. San Francisco, CA: HarperSanFrancisco, 1994. p. 129Context: I can accept failure. Everyone fails at something. But I can't accept not trying [no hard work].
Talent wins games, but teamwork and intelligence wins championships. (p. 20, 24)

„My attitude is that if you push me towards something that you think is a weakness, then I will turn that perceived weakness into a strength.“

„I've never lost a game I just ran out of time.“

Source: For the Love of the Game

„Everybody has talent, but ability takes hard work.“

„As athletes, we're used to reacting quickly. Here, it's 'come, stop, come, stop.' There's a lot of downtime. That's the toughest part of the day.“

„Some people want it to happen, some wish it would happen, others make it happen.“

Variant: Some people want it to happen, some wish it would happen, and others make it happen.

„To learn to succeed, you must first learn to fail.“

„Obstacles don’t have to stop you. If you run into a wall, don’t turn around and give up. Figure out how to climb it, go through it, or work around it.“ 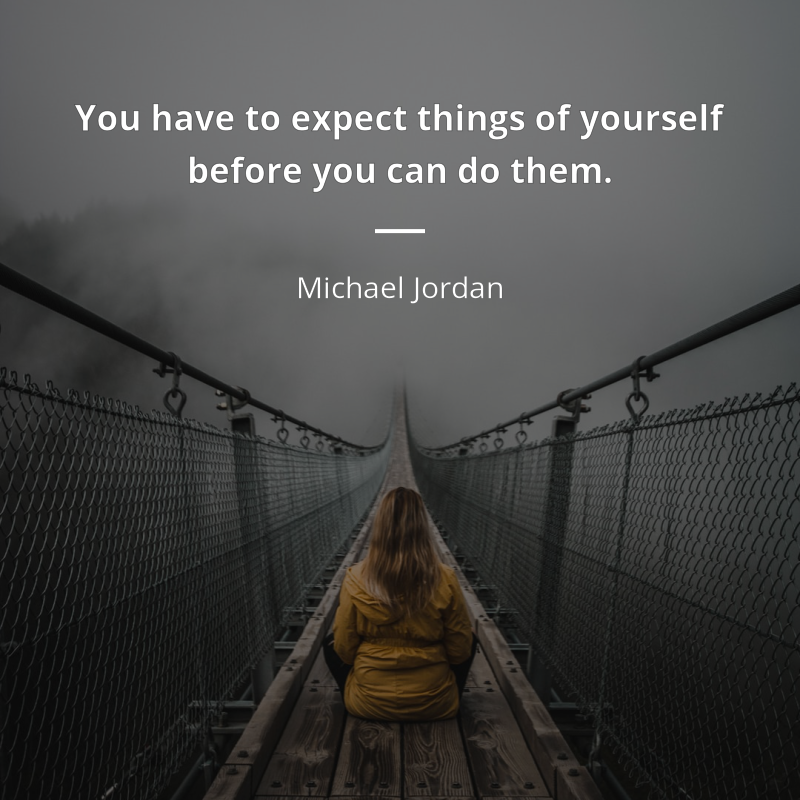 „You have to expect things of yourself before you can do them.“

Variant: You must expect great things of yourself before you can do them.

„My mother is my root, my foundation. She planted the seed that I base my life on, and that is the belief that the ability to achieve starts in your mind.“

„I've missed over 9,000 shots in my career.
I've lost almost 300 games.
26 times I've been trusted to take the game-winning shot and missed.
I've failed over and over and over again in my life.
And that is why I succeed.“

„To be successful you have to be selfish, or else you never achieve. And once you get to your highest level, then you have to be unselfish. Stay reachable. Stay in touch. Don't isolate.“

„If you quit ONCE it becomes a habit. Never quit!!!“

„Don't let them drag you down by rumors just go with what you believe in.“

Source: I Can't Accept Not Trying: Michael Jordan on the Pursuit of Excellence

„If you do the work you get rewarded. There are no shortcuts in life.“

„Once I made a decision, I never thought about it again.“