Kobe Bean Bryant is an American former professional basketball player. He played his entire 20-year career with the Los Angeles Lakers of the National Basketball Association . He entered the NBA directly from high school and won five NBA championships with the Lakers. Bryant is an 18-time All-Star, 15-time member of the All-NBA Team, and 12-time member of the All-Defensive team. He led the NBA in scoring during two seasons, and ranks third on the league's all-time regular season scoring and fourth on the all-time postseason scoring list. He holds the NBA record for the most seasons playing with one franchise for an entire career and is widely regarded as one of the greatest basketball players of all time. Bryant is the first guard in NBA history to play for at least 20 seasons.

The son of former NBA player Joe Bryant, Kobe Bryant enjoyed a successful high school basketball career at Lower Merion High School in Pennsylvania, where he was recognized as the top high school basketball player in the country. He declared for the NBA draft upon graduation and was selected in the 13th overall pick in the 1996 NBA draft by the Charlotte Hornets, who traded him to the Lakers. As a rookie, Bryant earned himself a reputation as a high-flyer and a fan favorite by winning the 1997 Slam Dunk Contest, and he was named an All-Star by his second season. Despite a feud between them, Bryant and Shaquille O'Neal led the Lakers to three consecutive NBA championships from 2000 to 2002.

In 2003, Bryant was accused of sexual assault in Colorado, but the charges were eventually dropped, and a civil suit was settled out of court. After the Lakers lost the 2004 NBA Finals, O'Neal was traded to the Miami Heat. Bryant became the cornerstone of the Lakers, and he led the NBA in scoring during the 2005–06 and 2006–07 seasons. In 2006, he scored a career-high 81 points against the Toronto Raptors, the second most points scored in a single game in league history behind Wilt Chamberlain's 100-point game in 1962. Bryant was awarded the regular season's Most Valuable Player Award in 2008. After losing in the 2008 NBA Finals, he led the Lakers to two consecutive championships in 2009 and 2010, earning the Finals MVP Award on both occasions. He continued to be among the top players in the league through 2013, when the 34-year-old Bryant suffered a torn Achilles tendon. Although he recovered, his play was limited the following two years by season-ending injuries to his knee and shoulder, respectively. Citing his physical decline, he announced that he would retire after the 2015–16 season.

At 34 years and 104 days of age, Bryant became the youngest player in league history to reach 30,000 career points. He became the all-time leading scorer in Lakers franchise history on February 1, 2010, when he surpassed Jerry West. During his third year in the league, Bryant was chosen to start the All-Star Game, and he would continue to be selected to start that game for a record 18 consecutive appearances until his retirement. His four All-Star MVP Awards are tied for the most in NBA history. At the 2008 and 2012 Summer Olympics, he won gold medals as a member of the U.S. national team. Sporting News and TNT named Bryant the top NBA player of the 2000s. In 2018, Bryant won the Academy Award for Best Animated Short Film for his film Dear Basketball.

„Great things come from hard work and perseverance. No excuses.“

„Heroes come and go, but legends are forever.“

„I'm extremely willful to win, and I respond to challenges. Scoring titles and stuff like that… it sounds, well, I don't care how it sounds - to me, scoring comes easy. It's not a challenge to me to win the scoring title, because I know I can.“

„I'm reflective only in the sense that I learn to move forward. I reflect with a purpose.“

„Everybody shut up. Let us work.“

„Listen to how everyone is talking about you. You have to use it as fuel for motivation.“

„If you see me in a fight with a bear, pray for the bear.“ 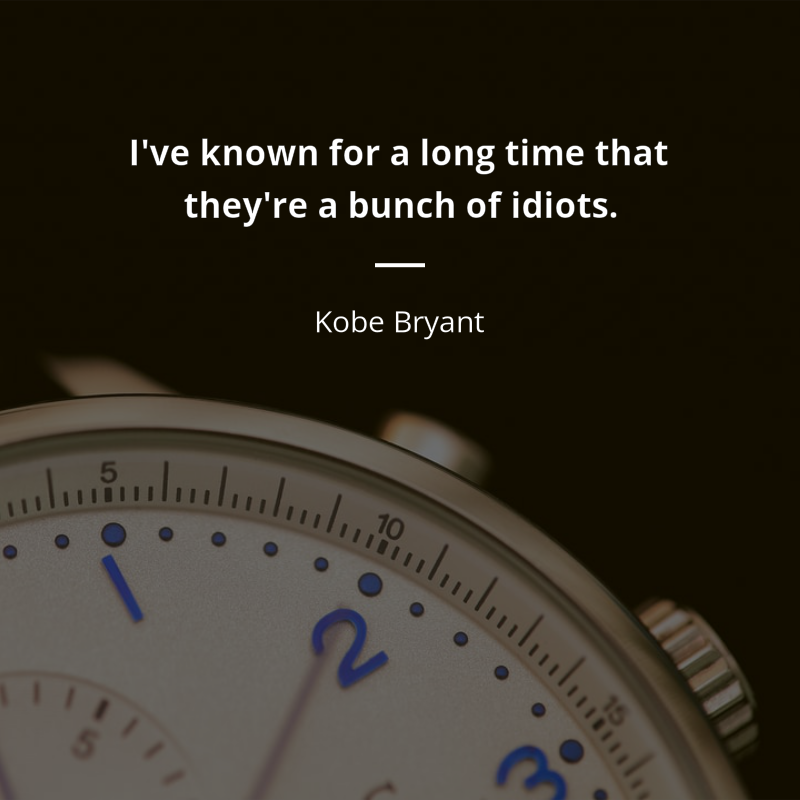 „I've known for a long time that they're a bunch of idiots.“

„When you have empathy toward your opponents, it helps you destroy them quicker. Because you understand exactly who they are. You understand what buttons to push. You understand if they're insecure, if they fear embarrassment. And you can really hit those buttons to strike a nerve.“

„You have to be true to who you are.“

„When you love something, you'll always come back to it. You'll always keep asking questions, and finding answers.“

„Everyting negative - pressure, challenges - is all an opportunity for me to rise.“

„If you want to make history, you have to do historic things.“

„The most important thing, the thing that unites all of us, is that we can INSPIRE and CHALLENGE one another TO BE BETTER.“