Venerable Fulton John Sheen was an American bishop of the Catholic Church known for his preaching and especially his work on television and radio. The cause for his canonization as a saint was officially opened in 2002. In June 2012, Pope Benedict XVI officially recognized a decree from the Congregation for the Causes of Saints stating that he lived a life of "heroic virtues" – a major step towards beatification – so he is now referred to as "Venerable."

Ordained a priest of the Diocese of Peoria in 1919, Sheen quickly became a renowned theologian, earning the Cardinal Mercier Prize for International Philosophy in 1923. He went on to teach theology and philosophy at The Catholic University of America as well as acting as a parish priest before being appointed Auxiliary Bishop of the Archdiocese of New York in 1951. He held this position until 1966 when he was made the Bishop of Rochester from October 21, 1966, to October 6, 1969, when he resigned and was made the Archbishop of the Titular See of Newport, Wales.

For 20 years as Father Sheen, later Monsignor, he hosted the night-time radio program The Catholic Hour on NBC before moving to television and presenting Life Is Worth Living . Sheen's final presenting role was on the syndicated The Fulton Sheen Program with a format very similar to that of the earlier Life is Worth Living show. For this work, Sheen twice won an Emmy Award for Most Outstanding Television Personality, and was featured on the cover of Time Magazine. Starting in 2009, his shows were being re-broadcast on the EWTN and the Trinity Broadcasting Network's Church Channel cable networks. Due to his contribution to televised preaching Sheen is often referred to as one of the first televangelists.

Source: Seven Words of Jesus and Mary: Lessons from Cana and Calvary

„A man may stand for the justice of God, but a woman stands for His Mercy.“

„Tolerance is an attitude of reasoned patience toward evil … a forbearance that restrains us from showing anger or inflicting punishment. Tolerance applies only to persons … never to truth.“

„By professing no ideal in morality, these nice people can never be accused of not living up to their creed. This is the great advantage that they have over the Christians — whose creed is so lofty that they can often and truly be accused of failing to meet its demands.“

„Communism is the final logic of the dehumanization of man.“

„You must remember to love people and use things, rather than to love things and use people.“

„In every friendship hearts grow and entwine themselves together, so that the two hearts seem to make only one heart with only a common thought. That is why separation is so painful; it is not so much two hearts separating, but one being torn asunder.“

„Books are the most wonderful friends in the world. When you meet them and pick them up, they are always ready to give you a few ideas. When you put them down, they never get mad; when you take them up again, they seem to enrich you all the more.“

„Each day he has a new idol, each week a new mood. His authority is public opinion: when that shifts, his frustrated soul shifts with it.“

Source: Peace of Soul (1949), Ch. 1, pp. 7–8Context: The modern man is no longer a unity, but a confused bundle of complexes and nerves. He is so dissociated, so alienated from himself that he sees himself less as a personality than as a battlefield where a civil war rages between a thousand and one conflicting loyalties. There is no single overall purpose in his life. His soul is comparable to a menagerie in which a number of beasts, each seeking its own prey, turn one upon the other. Or he may be likened to a radio, that is tuned in to several stations; instead of getting any one clearly, it receives only an annoying static.If the frustrated soul is educated, it has a smattering of uncorrected bits of information with no unifying philosophy. Then the frustrated soul may say to itself: "I sometimes think there are two of me a living soul and a Ph. D." Such a man projects his own mental confusion to the outside world and concludes that, since he knows no truth, nobody can know it. His own skepticism (which he universalizes into a philosophy of life) throws him back more and more upon those powers lurking in the dark, dank caverns of his unconsciousness. He changes his philosophy as he changes his clothes. On Monday, he lays down the tracks of materialism; on Tuesday, he reads a best seller, pulls up the old tracks, and lays the new tracks of an idealist; on Wednesday, his new roadway is Communistic; on Thursday, the new rails of Liberalism are laid; on Friday, he-hears a broadcast and decides to travel on Freudian tracks: on Saturday, he takes a long drink to forget his railroading and, on Sunday, ponders why people are so foolish as to go to Church. Each day he has a new idol, each week a new mood. His authority is public opinion: when that shifts, his frustrated soul shifts with it.

„When a child is given to his parents, a crown is made for that child in Heaven, and woe to the parents who raise a child without consciousness of that eternal crown!“ 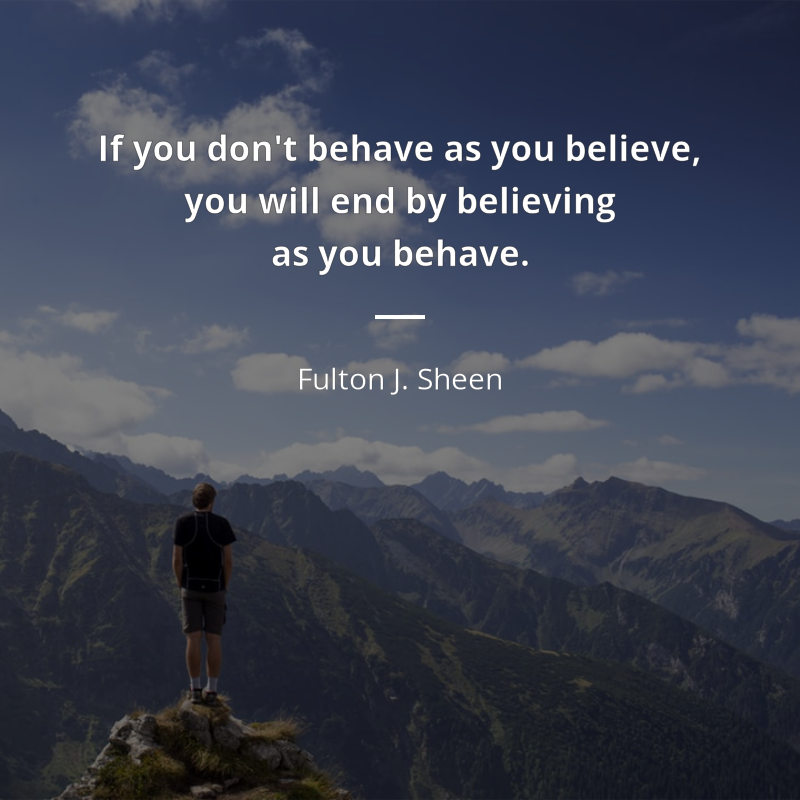 „If you don't behave as you believe, you will end by believing as you behave.“

„Evil men may not always do these things, but they seek to destroy goodness, virtue, morality, decency, truth and honor“

"Bishop Sheen Writes...Communism and Tragedy," The Toledo Blade, Sunday, July 26, 1959, sec. 2, p. 5. https://www.google.com/search?hl=en&q=%22communists%20believe%20in%20the%20devil%22%20site:news.google.com/newspapers&source=newspapers&gws_rd=ssl#hl=en&q=%22Bishop+Sheen+Writes...+Communism+And+Tragedy%22+Context: No one can understand Communism who does not believe in the devil. The Communists believe in the devil. The Communists organized a so-called "patriotic" church. A few brain washed were to be in charge of the churches because they were loyal to the anti-God regime.
One of the first orders given by the Communists to them was that the prayer to Prayer to Saint Michael be no longer said because it invoked the protection of St. Michael against "the wickedness and snares of the devil." As one Communist judge said: "We are those devils."
It is hard for many in the free world to believe that there are not only bad men, but evil men. Bad men steal, rape, ravage and plunder. Evil men may not always do these things, but they seek to destroy goodness, virtue, morality, decency, truth and honor. Bad men who steal admit honesty; evil men who do not steal, call dishonesty "honesty," totalitarianism "democracy," slavery "freedom." Evil men can be nice at table, polite with women, courteous in Washington, refined in London and calm in Geneva.
But the principle which guides their every move is the maxim of Lenin: every lie, trickery, knavery and deceit must be used to.

„Patience is power.
Patience is not an absence of action;
rather it is "timing"
it waits on the right time to act,
for the right principles
and in the right way.“

„Broadmindedness, when it means indifference to right and wrong, eventually ends in a hatred of what is right.“

„There are angels near you to guide you and protect you, if you would but invoke them.“

AngelsLife Is Worth Living (1951–1957)Context: There are angels near you to guide you and protect you, if you would but invoke them. It is not later than we think, it is a bigger world than we think.

„Economic disorder is a symptom of spiritual disorder.“

Source: Peace of Soul (1949), Ch. 2, p. 27Context: It is assumed by many reformers that the principal and major cause of unhappiness is economic insecurity, but this theory forgets that there are economic problems only because men have not solved the problems of their own souls. Economic disorder is a symptom of spiritual disorder.

265th Pope of the Catholic Church

266th Pope of the Catholic Church

265th Pope of the Catholic Church