Frédéric François Chopin was a Polish composer and virtuoso pianist of the Romantic era who wrote primarily for the solo piano. He gained and has maintained renown worldwide as a leading musician of his era, whose "poetic genius was based on a professional technique that was without equal in his generation." Chopin was born in what was then the Duchy of Warsaw and grew up in Warsaw, which in 1815 became part of Congress Poland. A child prodigy, he completed his musical education and composed his earlier works in Warsaw before leaving Poland at the age of 20, less than a month before the outbreak of the November 1830 Uprising.

At 21 he settled in Paris. Thereafter, during the last 18 years of his life, he gave only some 30 public performances, preferring the more intimate atmosphere of the salon. He supported himself by selling his compositions and by teaching piano, for which he was in high demand. Chopin formed a friendship with Franz Liszt and was admired by many of his musical contemporaries, including Robert Schumann. In 1835 he obtained French citizenship. After a failed engagement to Maria Wodzińska from 1836 to 1837, he maintained an often troubled relationship with the French woman writer George Sand. A brief and unhappy visit to Majorca with Sand in 1838–39 was one of his most productive periods of composition. In his last years, he was financially supported by his admirer Jane Stirling, who also arranged for him to visit Scotland in 1848. Through most of his life, Chopin suffered from poor health. He died in Paris in 1849, at the age of 39, probably of tuberculosis.

All of Chopin's compositions include the piano. Most are for solo piano, though he also wrote two piano concertos, a few chamber pieces, and some songs to Polish lyrics. His keyboard style is highly individual and often technically demanding; his own performances were noted for their nuance and sensitivity. Chopin invented the concept of the instrumental ballade. His major piano works also include mazurkas, waltzes, nocturnes, polonaises, études, impromptus, scherzos, preludes and sonatas, some published only after his death. Influences on his composition style include Polish folk music, the classical tradition of J. S. Bach, Mozart and Schubert, as well as the Paris salons where he was a frequent guest. His innovations in style, musical form, and harmony, and his association of music with nationalism, were influential throughout and after the late Romantic period.

Chopin's music, his status as one of music's earliest superstars, his association with political insurrection, his love life and his early death have made him a leading symbol of the Romantic era in the public consciousness. His works remain popular, and he has been the subject of numerous films and biographies of varying degrees of historical accuracy.

„How great a joy I feel in my heart. That a day so pleasant, so dear and glorious begins, a day that I greet with the wish. That long years may pass in happiness. In health and vigour, peacefully, successfully. May the gift of heaven fall richly upon you“

As quoted in his letter to his father, dated December 6th 1817[citation needed]

„Play Mozart in memory of me— and I will hear you.“

„I wish I could throw off the thoughts which poison my happiness.“

„Time is still the best critic, and patience the best teacher.“ 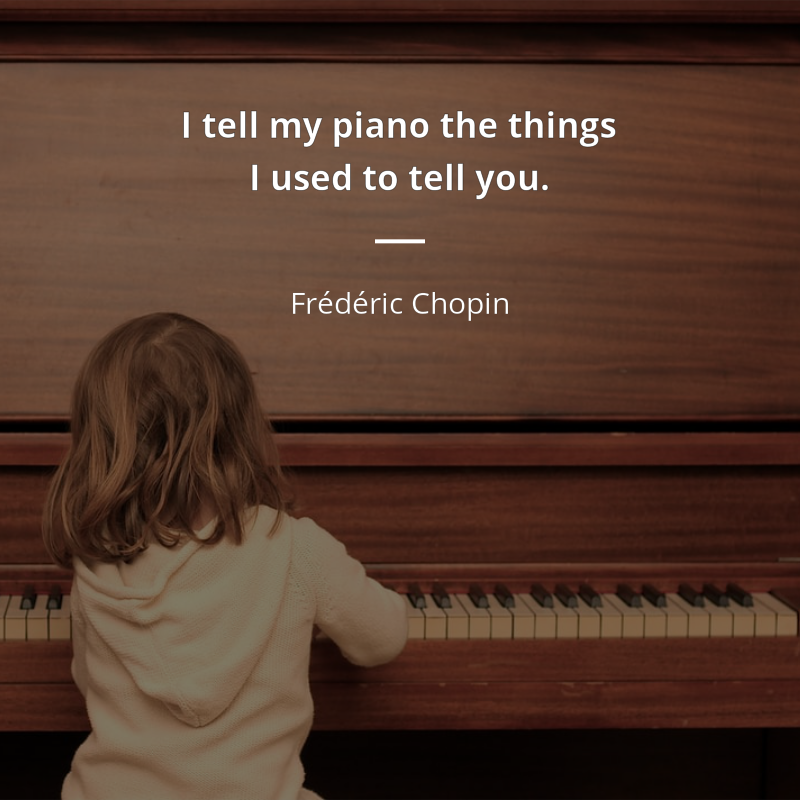 „I tell my piano the things I used to tell you“

„You already know when I'm writing, so don't be surprised if it's short and dry, because I'm too hungry to write anything fat“

As quoted in his letter to Jan Bialoblocki, written in Zelazowa Wola and dated back to December 24th 1826[citation needed]

„I could express my feelings more easily if they could be put into the notes of music, but as the very best concert would not cover my affection for you, dear daddy, I must use the simple words of my heart, to lay before you my utmost gratitude and filial affection“

„Simplicity is the final achievement. After one has played a vast quantity of notes and more notes, it is simplicity that emerges as the crowning reward of art.“

„I have met Rossini, Cherubini, Baillot, etc.—also Kalkbrenner. You would not believe how curious I was about Herz, Liszt, Hiller, etc. — They are all zero beside Kalkbrenner. I confess that I have played like Herz, but would wish to play like Kalkbrenner. If Paganini is perfection, Kalkbrenner is his equal, but in quite another style.“

„Concerts are never real music, you have to give up the idea of hearing in them all the most beautiful things of art.“

Said to one of his students, according to "Chopin: Pianist and Teacher: As Seen by His Pupils" by Jean-Jacques Eigeldinger

„I am cross and depressed, and people bore me with their excessive attentions. I can't breathe, I can't work; I feel alone, alone, alone, although I am surrounded. There are a whole lot of ladies, 70 to 80 year-old lords, but no young folk: they are all out shooting. One can't get out of doors because it has been raining and blowing for several days.“

„One needs only to study a certain positioning of the hand in relation to the keys to obtain with ease the most beautiful sounds, to know how to play long notes and short notes and to [attain] certain unlimited dexterity… A well formed technique, it seems to me, [is one] that can control and vary a beautiful sound quality.“

„Messieurs, I should like to be granted the favour of performing at one of your admirable concerts, and this I beg to ask of you. Trusting, since I lack other qualifications to obtain this, in your goodwill towards artists, I dare to hope that you will greet my request favourably, I have the honour to be, Messieurs, your very humble servant.
Frédéric Chopin
Cité Bergère, No. 4“

Letter of application to the Société des Concerts du Conservatoire.Source: (13 March 1832); published in At the Piano with Fauré (1963) by Marguerite Long, p. 31

„I'm a revolutionary, money means nothing to me.“

„Sometimes I can only groan, and suffer, and pour out my despair at the piano!“

„I astonished Kalkbrenner, who at once asked me, was I not a pupil of Field, because I have Cramer's method and Field's touch.“

„I dream music but I cannot make any because here there are not any pianos . . . in this respect this is a savage country.“

Letter to Camille Pleyel.Context: My piano has not yet arrived. How did you send it? By Marseilles or by Perpignan? I dream music but I cannot make any because here there are not any pianos... in this respect this is a savage country.

„I love to indulge it, even though it may be all wrong.“

As quoted when he talked about his piano concerto, op.11.Context: Here you doubtless observe my tendency to do wrong against my will. As something has involuntarily crept into my head through my eyes, I love to indulge it, even though it may be all wrong.

„Here you doubtless observe my tendency to do wrong against my will.“

As quoted when he talked about his piano concerto, op.11.Context: Here you doubtless observe my tendency to do wrong against my will. As something has involuntarily crept into my head through my eyes, I love to indulge it, even though it may be all wrong.