In December 2016, he was ranked 21st on the Forbes list of The World's Most Powerful People. As of October 2018, he has a net worth of $22.3 billion and is listed by Forbes as the 54th-richest person in the world.Born and raised in Pretoria, South Africa, Musk moved to Canada when he was 17 to attend Queen's University. He transferred to the University of Pennsylvania two years later, where he received an economics degree from the Wharton School and a degree in physics from the College of Arts and Sciences. He began a Ph.D. in applied physics and material sciences at Stanford University in 1995 but dropped out after two days to pursue an entrepreneurial career. He subsequently co-founded Zip2, a web software company, which was acquired by Compaq for $340 million in 1999. Musk then founded X.com, an online bank. It merged with Confinity in 2000 and later that year became PayPal, which was bought by eBay for $1.5 billion in October 2002.In May 2002, Musk founded SpaceX, an aerospace manufacturer and space transport services company, of which he is CEO and lead designer. He helped fund Tesla, Inc., an electric vehicle and solar panel manufacturer, in 2003, and became its CEO and product architect. In 2006, he inspired the creation of SolarCity, a solar energy services company that is now a subsidiary of Tesla, and operates as its chairman. In 2015, Musk co-founded OpenAI, a nonprofit research company that aims to promote friendly artificial intelligence. In July 2016, he co-founded Neuralink, a neurotechnology company focused on developing brain–computer interfaces, and is its CEO. In December 2016, Musk founded The Boring Company, an infrastructure and tunnel-construction company.

In addition to his primary business pursuits, Musk has envisioned a high-speed transportation system known as the Hyperloop, and has proposed a vertical take-off and landing supersonic jet electric aircraft with electric fan propulsion, known as the Musk electric jet.

Musk has stated that the goals of SpaceX, Tesla, and SolarCity revolve around his vision to change the world and humanity. His goals include reducing global warming through sustainable energy production and consumption, and reducing the risk of human extinction by establishing a human colony on Mars.

„If things are not failing, you are not innovating enough.“

„I think it is a mistake to hire huge numbers of people to get a complicated job done. Numbers will never compensate for talent in getting the right answer (two people who don't know something are no better than one), will tend to slow down progress, and will make the task incredibly expensive.“

„It would be an incredible adventure. And life needs to be more than just solving every day problems. You need to wake up and be excited about the future“

„Well, I have tried to learn as much as possible from prior attempts.“

„I think we have a duty to maintain the light of consciousness to make sure it continues into the future.“

„This is the chance to fulfill a dream.“

„Sooner or later, we must expand life beyond our little blue mud ball--or go extinct.“

„I would like to die on Mars; just not on impact.“

„We need to figure out how to have the things we love, and not destroy the world.“

„The long term ultimate objective – the holy grail – is we would like to help make life multi-planetary.“

„The answer was we thought it could be done.“

„A great deal of bargaining power with suppliers. We are never locked in to anyone.“

„Never saw this British expat guy who lives in Thailand (sus) at any point when we were in the caves. Only people in sight were the Thai navy/army guys, who were great. Thai navy seals escorted us in — total opposite of wanting us to leave. Water level was actually very low & still (not flowing) — you could literally have swum to Cave 5 with no gear, which is obv how the kids got in. If not true, then I challenge this dude to show final rescue video. You know what, don’t bother showing the video. We will make one of the mini-sub/pod going all the way to Cave 5 no problemo. Sorry pedo guy, you really did ask for it.“

„They [Apple] have hired people we've fired. We always jokingly call Apple the "Tesla Graveyard." If you don't make it at Tesla, you go work at Apple. I'm not kidding…. cars are very complex compared to phones or smartwatches. You can't just go to a supplier like Foxconn and say: Build me a car. But for Apple, the car is the next logical thing to finally offer a significant innovation. A new pencil or a bigger iPad alone were not relevant enough.“

All Charged Up in Berlin http://global.handelsblatt.com/edition/271/ressort/companies-markets/article/all-charged-up-in-berlin in Handelsblatt (25 September 2015)

„I think the rocket business is quite cyclic. There are a great many peaks and troughs.“

„The heroes of the books I read, The Lord of the Rings and the Foundation series, always felt a duty to save the world.“

„Sending large numbers of people to explore and settle Mars in the decades ahead isn't inevitable, but it is entirely possible. The biggest challenge isn't the engineering and spacecraft, however difficult they may be. Instead, it's making sure that a sustained Mars campaign proceeds as a national priority, and that will happen only if the American people are behind it. We have the opportunity now to make this happen. We might not be so fortunate in the future.“ 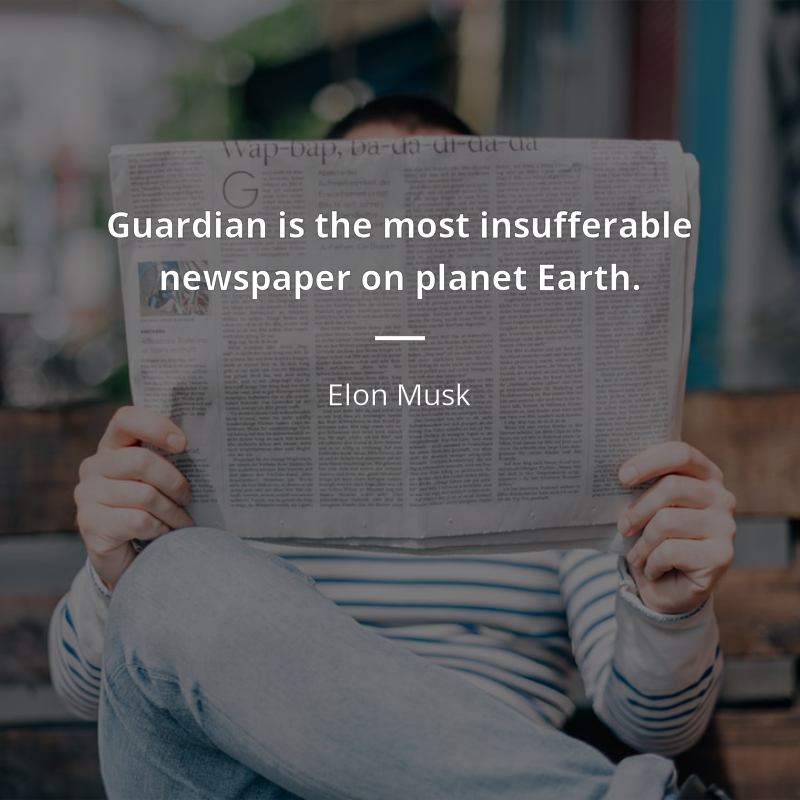 „Guardian is the most insufferable newspaper on planet Earth.“

„People are mistaken when they think that technology just automatically improves. It does not automatically improve. It only improves if a lot of people work very hard to make it better, and actually it will, I think, by itself degrade, actually. You look at great civilizations like Ancient Egypt, and they were able to make the pyramids, and they forgot how to do that. And then the Romans, they built these incredible aqueducts. They forgot how to do it.“

Career advice from Elon Musk's latest TED interview, in one sentence http://www.businessinsider.com/brilliant-career-advice-from-elon-musk-2017-5 at 2017 TED conference (May 9, 2017)

44th President of the United States of America

44th President of the United States of America