Augusto José Ramón Pinochet Ugarte was a Chilean general and politician who ruled as dictator of Chile from 1973 to 1990, first as the President of the Government Junta of Chile from 1973 to 1981, before being declared President of the Republic by the junta in 1974.Pinochet assumed power in Chile following a United States-backed coup d'état on 11 September 1973 that overthrew the democratically elected socialist Unidad Popular government of President Salvador Allende and ended civilian rule. The support of the United States was crucial to the coup and the consolidation of power afterward. Pinochet had been promoted to Commander-in-Chief of the Chilean Army by Allende on 23 August 1973, having been its General Chief of Staff since early 1972. In December 1974, the ruling military junta appointed Pinochet Supreme Head of the nation by joint decree, although without the support of one of the coup's instigators, Air Force General Gustavo Leigh. Following his rise to power, Pinochet persecuted leftists, socialists, and political critics, resulting in the executions of from 1,200 to 3,200 people, the internment of as many as 80,000 people and the torture of tens of thousands. According to the Chilean government, the number of executions and forced disappearances was 3,095. Operation Condor was founded at the behest of the Pinochet regime in late November 1975, his 60th birthday.Under the influence of the free market-oriented "Chicago Boys", Pinochet's military government implemented economic liberalization, including currency stabilization, removed tariff protections for local industry, banned trade unions and privatized social security and hundreds of state-owned enterprises. These policies produced high economic growth, but critics state that economic inequality dramatically increased and attribute the devastating effects of the 1982 monetary crisis on the Chilean economy to these policies. For most of the 1990s, Chile was the best-performing economy in Latin America, though the legacy of Pinochet's reforms continues to be in dispute. His fortune grew considerably during his years in power through dozens of bank accounts secretly held abroad and a fortune in real estate. He was later prosecuted for embezzlement, tax fraud and for possible commissions levied on arms deals.Pinochet's 17-year rule was given a legal framework through a controversial 1980 plebiscite, which approved a new constitution drafted by a government-appointed commission. In a 1988 plebiscite, 56% voted against Pinochet's continuing as president, which led to democratic elections for the presidency and Congress. After stepping down in 1990, Pinochet continued to serve as Commander-in-Chief of the Chilean Army until 10 March 1998, when he retired and became a senator-for-life in accordance with his 1980 Constitution. However, Pinochet was arrested under an international arrest warrant on a visit to London on 10 October 1998 in connection with numerous human rights violations. Following a legal battle, he was released on grounds of ill-health and returned to Chile on 3 March 2000. In 2004, Chilean Judge Juan Guzmán Tapia ruled that Pinochet was medically fit to stand trial and placed him under house arrest. By the time of his death on 10 December 2006, about 300 criminal charges were still pending against him in Chile for numerous human rights violations during his 17-year rule and tax evasion and embezzlement during and after his rule. He was also accused of having corruptly amassed at least US$28 million. Wikipedia

„Power must be vested in the armed forces, since only they have the organization and the means to fight Marxism.“

„I devalued the peso solely looking after the poor.“ 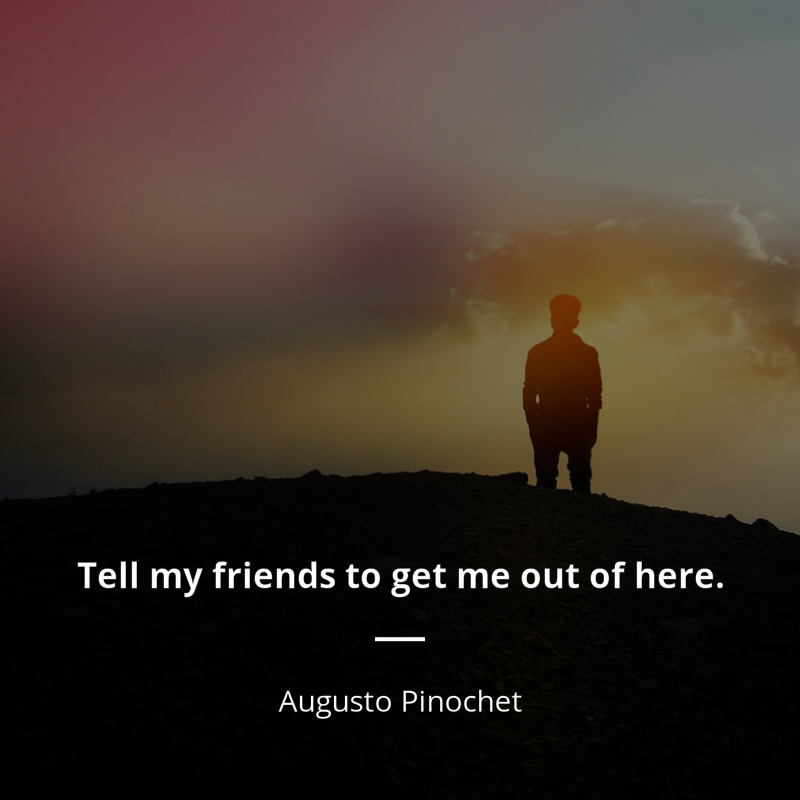 „Tell my friends to get me out of here.“

„I'm looking at them from above, because God put me there.“

„The only solution to the issue of human rights is oblivion.“

„He could have a thousand faults, but I do not blame anyone in particular and I despise brutality with which the Nazis acted against Israelites; but the fault is not only of Hitler, but a group of high-ranked dignitaries.“

„My library is filled with UN condemnations.“

„Had I been a dictator, I would still be governing.“

„Rome cut off the heads of Christians and they continued to reappear one way or another. Something similar happens with Marxists.“

„We practically wiped this nation clean of Marxists.“

„I have a sour face. Maybe that's why they say I'm a dictator.“

„I have lived with my conscience and my own memories for over quarter of a century since the events of 1973.… These are not easy reflections for me. But I am at peace with myself, and with the Chilean people, about what happened. I am clear in my mind that the return to Chile of true democracy, and from that the true freedom to which all individual people are entitled, could not have been achieved without the removal of the Marxist government.“

„This is not a dictadura [dictatorship/hard rule] but a dictablanda“

„I was only an aspiring dictator. I was never a real dictator.“

„Not a single leaf moves in this country if I'm not the one moving it. I want that to be clear!“

Speech (October 1981), quoted in "Las frases para el bronce de Pinochet." This expression is not original to Pinochet; it is also attributed to Inca Atahualpa in 1531. See Las Casas, Destruction of the Indies.1980s

„The armed forces have acted today solely from the patriotic inspiration of saving the country from the tremendous chaos into which it was being plunged by the Marxist government of Salvador Allende.… The Junta will maintain judicial power and consultantship of the Comptroller. The Chambers will remain in recess until further orders. That is all.“

„I am going to die. The person who succeeds me also would die. But elections, you won't have.“

„The freedoms which had been so hard won from colonial domination were being crushed by Soviet-inspired and funded military and political forces. Their clear intention was to deprive the people of their democratic freedoms. As history shows, this is what had happened in the Soviet Union and in Cuba, and continues to be the case in other parts of the world.“

„Remark to reporters (September 1991) when asked about the burial of 125 political opponents in 108 graves. Quoted in Chile Under Pinochet (2000) by Mark Ensalaco“

Duce and President of the Council of Ministers of Italy. Le…

Chairman of the Central Committee of the Communist Party of…

eighteenth President of the French Republic

General Secretary of the Communist Party of the Soviet Union

Duce and President of the Council of Ministers of Italy. Le…

Chairman of the Central Committee of the Communist Party of…