„A skilled soldier kills your enemies, but a skilled duelist kills your allies.“

World of the Five Gods series, The Curse of Chalion (2000)

Science Fiction and fantasy author from the USA 1949 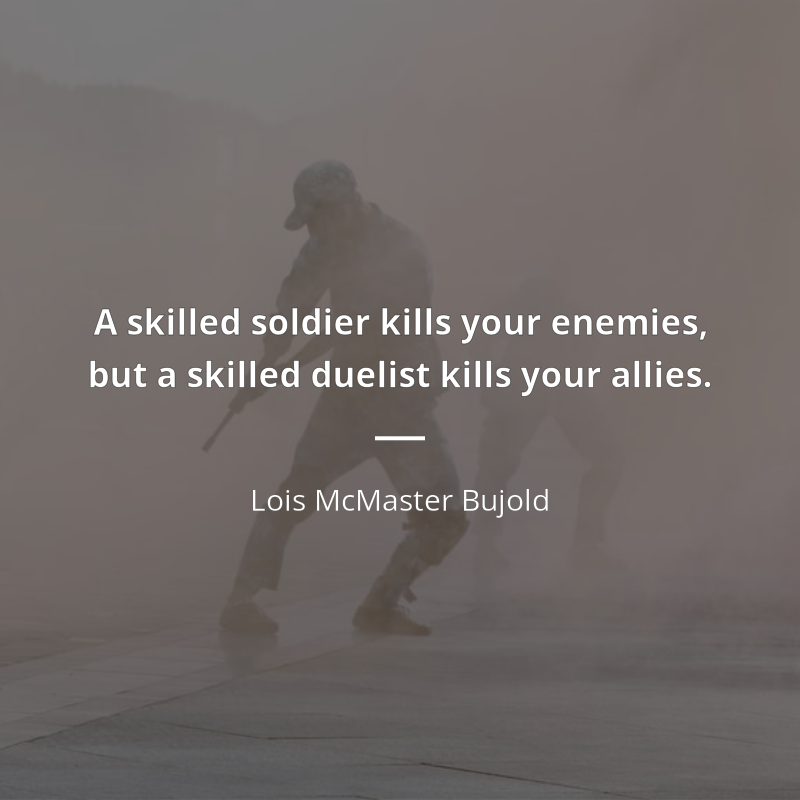 „Out, you impostors!
Quack-salving, cheating mountebanks! Your skill
Is to make sound men sick, and sick men kill.“

„If you kill your enemies, they win.“

Attributed by Gavin McInnes (AKA Miles McInnes) of Rebel Media in the satirical video "Why Miles McInnes is moving back to Canada: Trudeau's 10 Greatest Quotes!" at 5m45s number 9/10 https://www.youtube.com/watch?v=_tpW1m-8yVQ&t=5m45s", along with accompanying article as Gavin McInnes “If you kill your enemies, they win”: Justin Trudeau’s greatest quotes! https://www.therebel.media/justin_trudeau_s_greatest_quotes released the same day, then repeated by Daniel Greenfield in his article "Surrendering to ISIS is the Only Way to Defeat It", Canada Free Press (31 March 2016) https://canadafreepress.com/article/surrendering-to-isis-is-the-only-way-to-defeat-it. A Reddit thread "Any evidence that Trudeau said 'if you kill your enemies, they win'?" https://www.reddit.com/r/canada/comments/68iwe3/any_evidence_that_trudeau_said_if_you_kill_your/ questioning the veracity of the attribution was created in April 2017. No corroborating evidence was found to support the "McCinnes brothers" claims that Trudeau said this, yet many others have repeated it as fact. It is possibly a paraphrasing of Trudeau's February 2016 quote about elevating enemies.Misattributed

„When God gives an assignment, he also gives the skill. Study your skills, then, to reveal your assignment.“

Source: Cure for the Common Life: Living in Your Sweet Spot

„Keep killing your ideas until they cannot be killed. If you never kill your ideas, you’ll kill your career.“

„Your enemies can kill you, but only your friends can hurt you.“

„As the eagle was killed by the arrow winged with his own feather, so the hand of the world is wounded by its own skill.“

„Th' adorning thee with so much art
Is but a barb'rous skill;
'T is like the pois'ning of a dart,
Too apt before to kill.“

Hagakure (c. 1716)Context: A certain swordsman in his declining years said the following: In one's life. there are levels in the pursuit of study. In the lowest level, a person studies but nothing comes of it, and he feels that both he and others are unskillful. At this point he is worthless. In the middle level he is still useless but is aware of his own insufficiencies and can also see the insufficiencies of others. In a higher level he has pride concerning his own ability, rejoices in praise from others, and laments the lack of ability in his fellows. This man has worth. In the highest level a man has the look of knowing nothing. These are the levels in general;. But there is one transcending level, and this is the most excellent of all. This person is aware of the endlessness of entering deeply into a certain Way and never thinks of himself as having finished. He truly knows his own insufficiencies and never in his whole life thinks that he has succeeded. He has no thoughts of pride but with self-abasement knows the Way to the end. It is said that Master Yagyu once remarked, "I do not know the way to defeat others, but the way to defeat myself." Throughout your life advance daily, becoming more skillful than yesterday, more skillful than today. This is never-ending.

„Tis a well-known fact that a man is either skilled in matters of loving or matters of war. ’Tis obvious that fighting is your skill.“

Source: In Bed with a Highlander

„A soldier's job was to kill. A rifle killed.“

Major Richard Sharpe, p. 55Sharpe (Novel Series), Sharpe's Enemy (1984)Context: He was a Major now, the ranks long in his past, yet he still carried the rifle. He had always carried a long-arm into battle; a musket when he was a private, a rifle now he was an officer. He saw no reason not to carry a gun. A soldier's job was to kill. A rifle killed.

„Keep your friends for friendship, but work with the skilled and competent“

Source: The 48 Laws of Power

Source: On Writing: A Memoir of the Craft

„It’s the problem with politics. Your enemies are often your allies. And vice versa.“

„When a feeling dissolves, it ceases to be your enemy and begins to be one of your allies.“

Variant translationsHence to fight and conquer in all your battles is not supreme excellence; supreme excellence consists in breaking the enemy's resistance without fighting.The best victory is when the opponent surrenders of its own accord before there are any actual hostilities... It is best to win without fighting.Original: (zh_Hant) 是故百戰百勝，非善之善者也；不戰而屈人之兵，善之善者也。Source: The Art of War, Chapter III · Strategic Attack

„You can keep your sword, for you fought proper. Like a proper soldier. Take your blade to paradise, and tell them you were killed by another proper soldier.“