„Yoga does not just change the way we see things, it transforms the person who sees.“ 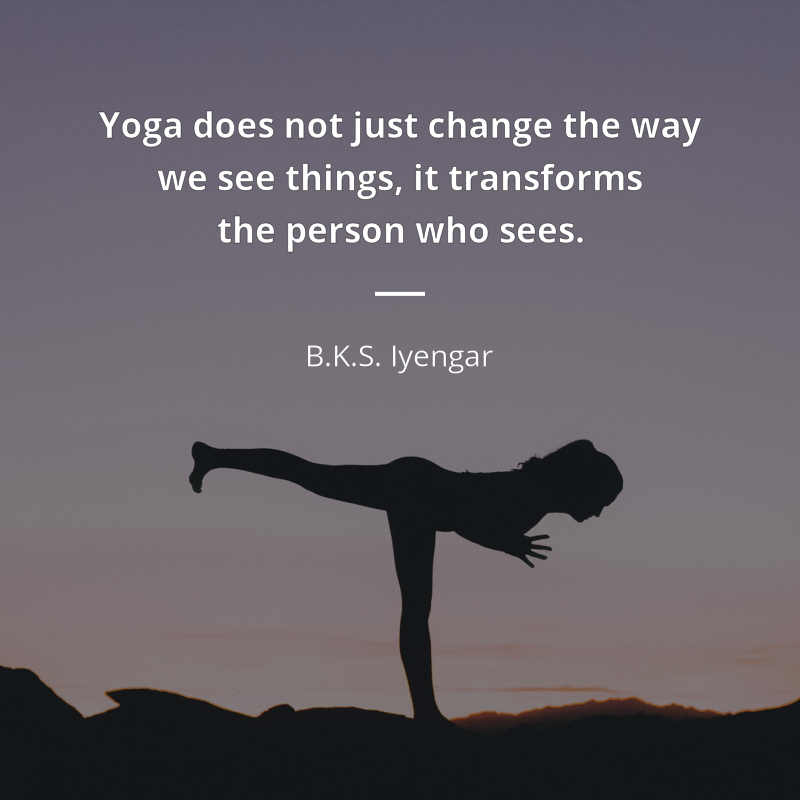 —  David Hockney British artist 1937
1980s, Context: When conventions are old, there's quite a good reason, it's not arbitrary. So Picasso discovered that, as it were, and I'm sure that for him that was probably almost as exciting as discovering Cubism, rediscovering conventions of ordinary appearance, one-point perspective or something. The purists think you're going backwards, but I know you'd go forward. Future art that is based on appearances won't look like the art that's gone before. Even revivals of a period are not the same. The Renaissance is not the same as ancient Greece; the Gothic revival is not the same as Gothic. It might look like that at first, but you can tell it's not. The way we see things is constantly changing. At the moment the way we see things has been left a lot to the camera. That shouldn't necessarily be. From a series of interviews with Marco Livingstone (April 22 - May 7, 1980 and July 6 - 7, 1980) quoted in Livingstone's David Hockney (1981) , p. 112

„Happiness does not depend on outward things, but on the way we see them.“

—  Jeremy Narby, The Cosmic Serpent: DNA and the Origins of Knowledge

„Changing how we see images is clearly one way to change the world.“

—  Bell Hooks, Reel to Real: Race, Sex, and Class at the Movies

—  Marcus Aurelius, Meditations
Meditations (c. 121–180 AD), Book X, Context: Acquire the contemplative way of seeing how all things change into one another, and constantly attend to it, and exercise thyself about this part [of philosophy]. For nothing is so much adapted to produce magnanimity.... But as to what any man shall say or think about him, or do against him, he never even thinks of it, being himself contented with these two things: with acting justly in what he now does, and being satisfied with what is now assigned to him; and he lays aside all distracting and busy pursuits, and desires nothing else than to accomplish the straight course through the law, and by accomplishing the straight course to follow God. X, 11

„I worry I don’t see things the way everyone else does.“

„Literature is indispensable to the world. The world changes according to the way people see it, and if you alter, even by a millimeter, the way a person looks at reality, then you can change it.“

„What we see, we see
and seeing is changing“

„Those who are yogis, bhakta-yogis, because they are in love with God, Kṛṣṇa, they are seeing every moment within their heart the Supreme Personality of Godhead. Anyone you love, you see always within your heart. Similarly, if you have love for God, Kṛṣṇa, then you can see Kṛṣṇa always. That is called yoga system.“

„We are at the classic-romantic barrier now, where on one side we see a cycle as it appears immediately—and this is an important way of seeing it—and where on the other side we can begin to see it as a mechanic does in terms of underlying form—and this is an important way of seeing things too. These tools for example—this wrench—has a certain romantic beauty to it, but its purpose is always purely classical. It's designed to change the underlying form of the machine.“

„I don’t see myself as a yoga person or a man who meditates and prays and eats well and says “Namaste” or “God bless you.” I became that because I exhausted all other options.“

—  Russell Brand, book Revolution
Revolution (2014), Context: "I don’t see myself as a yoga person or a man who meditates and prays and eats well and says “Namaste” or “God bless you.” I became that because I exhausted all other options. There was a point, I’ll admit, when I flung myself full force into an L. A. New Age lifestyle. I’d just got divorced, and a movie I wanted to do well didn’t meet my expectations. My response to this was to stop shaving and start wearing pajamas outdoors. That is relatively typical behavior for any lunatic; we see them everywhere—twitching, twisting, hollering at their imagined foes. The difference is I was doing it in Hollywood and my pajamas looked suitably ethnic, so I think I got away with it. Although my mates have subsequently told me they were worried and, thinking about it, they did drop hints like “Trim your beard, you look like a shoe bomber” and “Stop wearing them gap-year trousers, you fuckin’ nut,” but I was immune. A friend of mine, himself no stranger to mental illness, and that’s putting it lightly—he’s a right fucking fruitcake, living at his mum’s on disability benefits—said to me, “In India if you have a mental breakdown, they don’t build you back up again; they leave you in communion with God.” He then looked up, mimicking, I supposed, an Indian yogi, and raised his hands and eyes skywards as if he were playing a tiny accordion just in front of his hairline. “They say, ‘Ah, he’s in conversation with Brahman now,’ and they revere you. In this country they just give you a bus pass.”

„The culture of Rome just doesn't match the culture of Yoga, not as far as I can see. In fact, I've decided that Rome and Yoga don't have anything in common at all. Except for the way they both kind of remind you of the word toga.“

„The greatest thing a human soul ever does in this world is to see something, and tell what it saw in a plain way. Hundreds of people can talk for one who can think, but thousands can think for one who can see. To see clearly is poetry, prophecy, and religion, — all in one.“

„If we believe that it is predominantly men who batter women, it is hard to see why women also need to change: We will continue saying, “Just change the men. They’re the batterers.”“

„You see persons and things not as they are but as you are.“