Rosalind Elsie Franklin was an English chemist and X-ray crystallographer whose work was central to the understanding of the molecular structures of DNA , RNA , viruses, coal, and graphite. Although her works on coal and viruses were appreciated in her lifetime, her contributions to the discovery of the structure of DNA were largely recognised posthumously.

Born to a prominent British Jewish family, Franklin was educated at a private day school at Norland Place in West London, Lindores School for Young Ladies in Sussex, and St Paul's Girls' School, London. Then she studied the Natural Sciences Tripos at Newnham College, Cambridge, from which she graduated in 1941. Earning a research fellowship, she joined the University of Cambridge physical chemistry laboratory under Ronald George Wreyford Norrish, who disappointed her for his lack of enthusiasm. The British Coal Utilisation Research Association offered her a research position in 1942, and started her work on coals. This helped her earn a Ph.D. in 1945. She went to Paris in 1947 as a chercheur under Jacques Mering at the Laboratoire Central des Services Chimiques de l'Etat, where she became an accomplished X-ray crystallographer. She became a research associate at King's College London in 1951 and worked on X-ray diffraction studies, which would eventually facilitate the double helix theory of the DNA. In 1953, after two years, owing to disagreement with her director John Randall and more so with her colleague Maurice Wilkins, she was compelled to move to Birkbeck College. At Birkbeck, John Desmond Bernal, chair of the physics department, offered her a separate research team. She died in 1958 at the age of 37 of ovarian cancer.

Franklin is best known for her work on the X-ray diffraction images of DNA, particularly Photo 51, while at King's College London, which led to the discovery of the DNA double helix for which James Watson, Francis Crick and Maurice Wilkins shared the Nobel Prize in Physiology or Medicine in 1962. Watson suggested that Franklin would have ideally been awarded a Nobel Prize in Chemistry, along with Wilkins, but, although there was not yet a rule against posthumous awards, the Nobel Committee generally does not make posthumous nominations.After finishing her work on DNA, Franklin led pioneering work at Birkbeck on the molecular structures of viruses. Her team member Aaron Klug continued her research, winning the Nobel Prize in Chemistry in 1982. Wikipedia 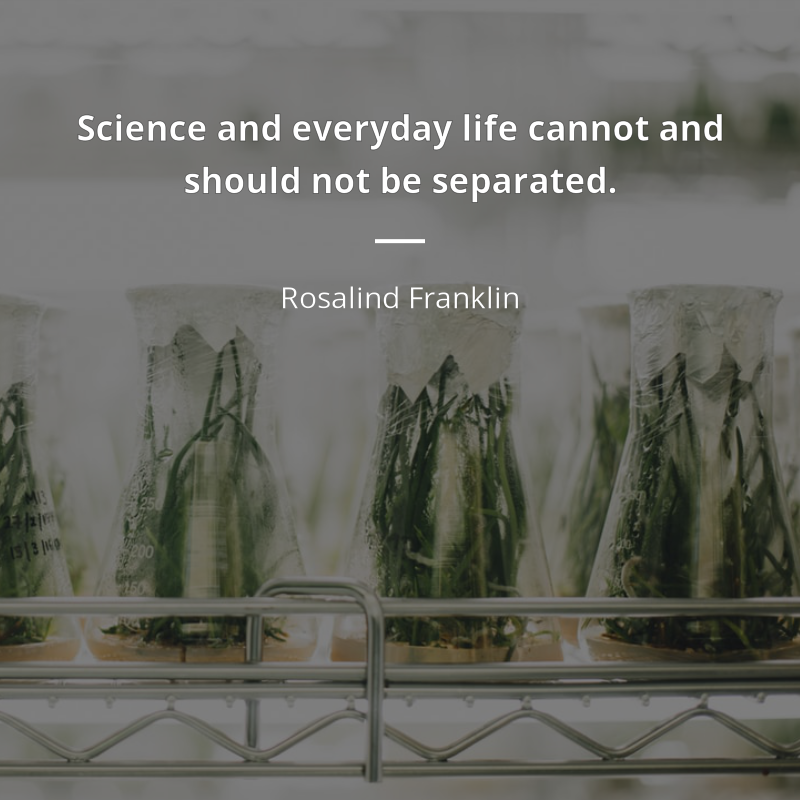 „Science and everyday life cannot and should not be separated.“

„What’s the use of doing all this work if we don't get some fun out of this?“