Rosa Louise McCauley Parks was an activist in the Civil Rights Movement, whom the United States Congress called "the first lady of civil rights" and "the mother of the freedom movement".

On December 1, 1955, in Montgomery, Alabama, Parks refused to obey bus driver James F. Blake's order to give up her seat in the "colored section" to a white passenger, after the whites-only section was filled. Parks was not the first person to resist bus segregation. Others had taken similar steps, including Bayard Rustin in 1942, Irene Morgan in 1946, Lillie Mae Bradford in 1951, Sarah Louise Keys in 1952, and the members of the ultimately successful Browder v. Gayle 1956 lawsuit who were arrested in Montgomery for not giving up their bus seats months before Parks. NAACP organizers believed that Parks was the best candidate for seeing through a court challenge after her arrest for civil disobedience in violating Alabama segregation laws, although eventually her case became bogged down in the state courts while the Browder v. Gayle case succeeded.

Parks' act of defiance and the Montgomery bus boycott became important symbols of the modern Civil Rights Movement. She became an international icon of resistance to racial segregation. She organized and collaborated with civil rights leaders, including Edgar Nixon, president of the local chapter of the NAACP; and Martin Luther King, Jr., a new minister in town who gained national prominence in the civil rights movement.

At the time, Parks was secretary of the Montgomery chapter of the NAACP. She had recently attended the Highlander Folk School, a Tennessee center for training activists for workers' rights and racial equality. She acted as a private citizen "tired of giving in". Although widely honored in later years, she also suffered for her act; she was fired from her job as a seamstress in a local department store, and received death threats for years afterwards.

Shortly after the boycott, she moved to Detroit, where she briefly found similar work. From 1965 to 1988 she served as secretary and receptionist to John Conyers, an African-American US Representative. She was also active in the Black Power movement and the support of political prisoners in the US.

After retirement, Parks wrote her autobiography and continued to insist that the struggle for justice was not over and there was more work to be done. In her final years, she suffered from dementia. Parks received national recognition, including the NAACP's 1979 Spingarn Medal, the Presidential Medal of Freedom, the Congressional Gold Medal, and a posthumous statue in the United States Capitol's National Statuary Hall. Upon her death in 2005, she was the first woman and third non-US government official to lie in honor at the Capitol Rotunda. Her birthday, February 4, and the day she was arrested, December 1, have both become Rosa Parks Day, commemorated in California and Missouri , and Ohio and Oregon .

„I would like to be remembered as a person who wanted to be free… so other people would be also free.“

„Have you ever been hurt and the place tries to heal a bit, and you just pull the scar off of it over and over again.“

„I do the very best I can to look upon life with optimism and hope and looking forward to a better day, but I don't think there is anything such as complete happiness. It pains me that there is still a lot of Klan activity and racism. I think when you say you're happy, you have everything that you need and everything that you want, and nothing more to wish for. I haven't reached that stage yet.“

„Arrest me for sitting on a bus? You may do that.“

„From my upbringing and the Bible I learned people should stand up for rights just as the children of Israel stood up to the Pharaoh.“

Quoted in The Rebellious Life of Mrs. Rosa Parks, by Jeanne Theoharis (2013)

„I had given up my seat before, but this day, I was especially tired. Tired from my work as a seamstress, and tired from the ache in my heart.“

„I have learned over the years that when one's mind is made up, this diminishes fear; knowing what must be done does away with fear.“

„I did not want to be mistreated, I did not want to be deprived of a seat that I had paid for. It was just time… there was opportunity for me to take a stand to express the way I felt about being treated in that manner. I had not planned to get arrested. I had plenty to do without having to end up in jail. But when I had to face that decision, I didn't hesitate to do so because I felt that we had endured that too long. The more we gave in, the more we complied with that kind of treatment, the more oppressive it became.“

„God has always given me the strength to say what is right… I had the strength of God and my ancestors with me.“

Quoted in The Rebellious Life of Mrs. Rosa Parks, by Jeanne Theoharis (2013) 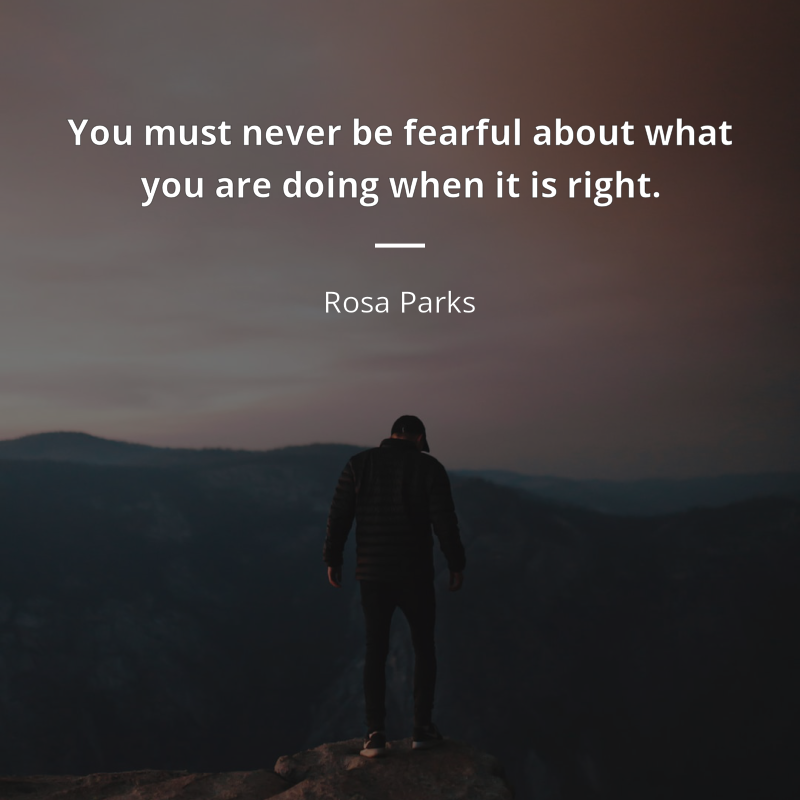 „You must never be fearful about what you are doing when it is right.“

„Racism is still with us. But it is up to us to prepare our children for what they have to meet, and, hopefully, we shall overcome.“

„I believe we are here on the planet Earth to live, grow up and do what we can to make this world a better place for all people to enjoy freedom.“

„People always said that I didn't give up my seat because I was tired, but that isn't true. I was not tired physically, or no more tired than I usually was at the end of a working day. I was not old, although some people have an image of me as being old then. I was forty-two. No, the only tired I was, was tired of giving in.“

„I'd see the bus pass every day… But to me, that was a way of life; we had no choice but to accept what was the custom. The bus was among the first ways I realized there was a black world and a white world.“

„I would like to be known as a person who is concerned about freedom and equality and justice and prosperity for all people.“

Quoted in "Women of the Hall: Rosa Parks," http://womenshalloffame.org/women.php?action=viewone&id=117 Women's National Hall of Fame (undated); said upon her 77th birthday (1990-02-04)

„Each person must live their life as a model for others.“

„The only tired I was, was tired of giving in.“

Rosa Parks: My Story, p. 116, Rosa Parks and James Haskins (1992)Context: People always said that I didn't give up my seat because I was tired, but that isn't true. I was not tired physically, or no more tired than I usually was at the end of a working day. I was not old, although some people have an image of me as being old then. I was forty-two. No, the only tired I was, was tired of giving in.

„Every day before supper and before we went to services on Sundays my grandmother would read the Bible to me, and my grandfather would pray. We even had devotions before going to pick cotton in the fields. Prayer and the Bible, became a part of my everyday thoughts and beliefs. I learned to put my trust in God and to seek Him as my strength.“

„We didn't have any civil rights. It was just a matter of survival, of existing from one day to the next. I remember going to sleep as a girl hearing the Klan ride at night and hearing a lynching and being afraid the house would burn down.“

Quoted in "Standing Up for Freedom," http://www.achievement.org/autodoc/page/par0bio-1 Academy of Achievement.org (2005-10-31)

„Thank you very much. I honor my late husband Raymond Parks, other Freedom Fighters, men of goodwill who could not be here. I'm also honored by young men who respect me and have invited me as an elder. Raymond, or Parks as I called him, was an activist in the Scottsboro Boys case, voter registration, and a role model for youth. As a self-taught businessman, he provided for his family, and he loved and respected me. Parks would have stood proud and tall to see so many of our men uniting for our common man and committing their lives to a better future for themselves, their families, and this country. Although criticism and controversy has been focused on in the media instead of benefits for the one million men assembling peacefully for spiritual food and direction, it is a success. I pray that my multiracial and international friends will view this [some audio unclear] gathering as an opportunity for all men but primarily men of African heritage to make changes in their lives for the better. I am proud of all groups of people who feel connected with me in any way, and I will always work for human rights for all people. However, as an African American woman, I am proud, applaud, and support our men in this assembly. I would a lot like to have male students of the Pathways to Freedom to join me here and wave their hands, but I don't think they're here right now. But thank you all young men of the Pathways to Freedom. Thank you and God bless you all. Thank you.“