Baron Giulio Cesare Andrea Evola , better known as Julius Evola , was an Italian philosopher, painter, and esotericist. According to the scholar Franco Ferraresi, "Evola's thought can be considered one of the most radical and consistent anti-egalitarian, anti-liberal, anti-democratic, and anti-popular systems in the twentieth century. It is a singular blend of several schools and traditions, including German idealism, Eastern doctrines, traditionalism, and the all-embracing Weltanschauung of the interwar conservative Revolution with which Evola had a deep personal involvement".

Historian Aaron Gillette described Evola as "one of the most influential fascist racists in Italian history". Evola was admired by the Italian fascist leader Benito Mussolini. He idolized the Nazi Schutzstaffel . He admired SS head Heinrich Himmler, whom he knew personally. Evola spent World War II working for the Nazi Sicherheitsdienst. During his trial in 1951, Evola denied being a fascist and instead referred to himself as a "superfascist". Concerning this statement, historian Elisabetta Cassina Wolff wrote that "It is unclear whether this meant that Evola was placing himself above or beyond Fascism".

Many of Evola's theories and writings were centered on his idiosyncratic mysticism, occultism, and esoteric religious studies, and this aspect of his work has influenced occultists and esotericists. Evola also advocated domination and rape of women because he saw it "as a natural expression of male desire". This misogynistic outlook stemmed from his extreme right views on gender roles, which demanded absolute submission from women.

Revolt Against the Modern World

„Worldview" is not based on books; it is an internal form, which at times in a person with little education is expressed much more brightly, than in some other "intellectual" or scientist.“ 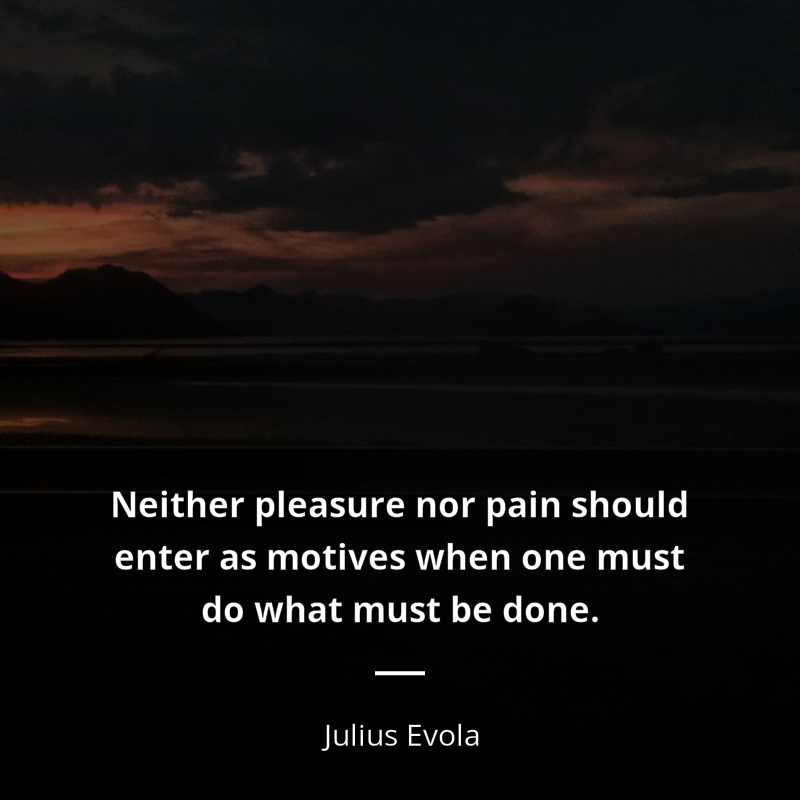 „Neither pleasure nor pain should enter as motives when one must do what must be done.“

Source: Ride the Tiger: A Survival Manual for the Aristocrats of the Soul

„My principles are only those that, before the French Revolution, every well-born person considered sane and normal.“

„The United States represents the reductio ad absurdum of the negative and the most senile aspects of Western civilization. What in Europe exist in diluted form are magnified and concentrated in the United States whereby they are revealed as the symptoms of disintegration and cultural and human regression. The American mentality can only be interpreted as an example of regression, which shows itself in the mental atrophy towards all higher interests and incomprehension of higher sensibility. The American mind has limited horizons, one conscribed to everything which is immediate and simplistic, with the inevitable consequence that everything is made banal, basic and leveled down until it is deprived of all spiritual life. Life itself in American terms is entirely mechanistic. The sense of I in America belongs entirely to the physical level of existence. The typical American neither has spiritual dilemmas nor complications: he is a natural joiner and conformist.“

„The good fighter does "what has to be done" and does not let himself be troubled by any scepticism. […] Given the ineptitude of the existing political groups, which, as is well known, have often forced qualified elements to move away from them, and given that what would have been desirable did not occur, which is to say, a political party as a mere force of manoeuvre in the present time, but absolutely disciplined and controlled by a superordinated group, owner of a precise inner doctrine not to be paraded in the common political struggle—given these things, the only possibilities seem to me to be those of more diffuse activity : to win, and influence with direct contacts, personalities, if possible, holding a post of command, not so much in the world of the political schemers as in that of the army, of officialdom and of business.“

„The blood of the heroes is closer to God than the ink of the philosophers and the prayers of the faithful.“

Source: Revolt Against the Modern World

„As a social bond, now one does not find even a faith of the warrior kind, that is, relationships of loyalty and honour. The social bond assumes a utilitarian and economic character; it is an agreement based on convenience and material interest — a type only a merchant would accept.“

„Christianity is at the root of the evil that has corrupted the West. This is the truth, and it does not admit uncertainty.“

„In a superior civilization, as, for example, that of the Indo-Aryans, the being who is without a characteristic form or caste (in the original meaning of the word), not even that of servant or shudra, would emerge as a pariah. In this respect America is a society of pariahs. There is a role for pariahs. It is to be subjected to beings whose form and internal laws are precisely defined. Instead the modern pariahs seek to become dominant themselves and to exercise their dominion over the entire world.“

„The Americans' 'open-mindedness', which is sometimes cited in their favor, is the other side of their interior formlessness. The same goes for their 'individualism'. Individualism and personality are not the same: the one belongs to the formless world of quantity, the other to the world of quality and hierarchy. The Americans are the living refutation of the Cartesian axiom, "I think, therefore I am": Americans do not think, yet they are. The American 'mind', puerile and primitive, lacks characteristic form and is therefore open to every kind of standardization.“

Italian journalist and writer of short stories and novels