Billie Eilish Pirate Baird O'Connell is an American singer and songwriter. She first gained media attention in 2016 when she uploaded the song "Ocean Eyes" to SoundCloud, and it was subsequently released by Interscope Records subsidiary Darkroom. The song was written and produced by her brother Finneas, with whom she collaborates on music and live shows. Her debut EP, Don't Smile at Me , reached the top 15 in the US, UK, Canada, and Australia.

Eilish's debut studio album, When We All Fall Asleep, Where Do We Go? , debuted atop the Billboard 200 and became the best-performing album of 2019 in the US. It also reached number one in the UK. The album contains six Billboard Hot 100 top 40 singles: "When the Party's Over", "Bury a Friend", "Wish You Were Gay", "Xanny", "Everything I Wanted", and "Bad Guy", the last of which became her first number one single in the US.

Her accolades include five Grammy Awards, two American Music Awards, two Guinness World Records, and three MTV Video Music Awards. She is the youngest person and first woman to win the four main Grammy categories, Best New Artist, Record of the Year, Song of the Year, and Album of the Year in the same year.

„I hate smiling. It makes me feel weak and powerless and small. I've always been like that; I don't smile in any pictures.“

„If I'm in a bad mood, or if I'm uncomfortable, it's probably what I'm wearing that's making me feel that way.“ 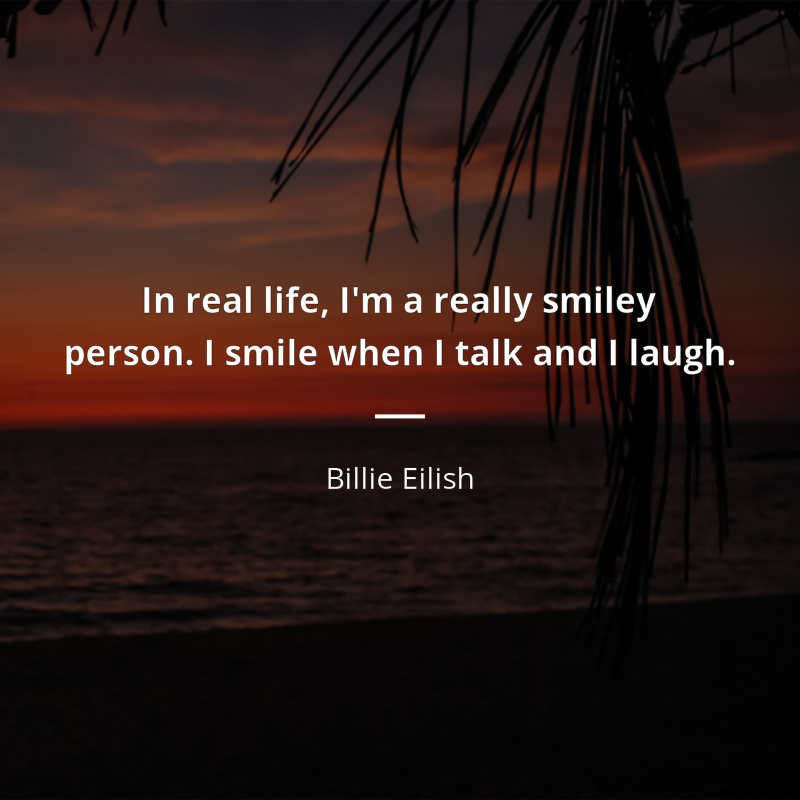 „In real life, I'm a really smiley person. I smile when I talk and I laugh.“

„Words are more powerful than some noises. Noises won't last long. Lyrics are so important, and people don't realise that.“

„Wake up and smell the coffee
Is your cup half full or empty?“

„I had a dream
I got everything I wanted
But when I wake up, I see
You with me

„You'll never know until you try it
You don't have to keep it quiet
And I know it makes you nervous
But I promise you, it's worth it
To show 'em everything you kept inside
Don't hide, don't hide
Too shy to say, but I hope you stay
Don't hide away
Come out and play“

„I think everybody deserves an equal amount of appreciation whether how old they are, but I mean, I'm cool with the praise. I'm good.“

„Smiling makes me feel weak and not in control and not powerful and small.

Writing a song is so personal. You have to have trust in someone you're working with; otherwise, you're not gonna come out with something that's really you.“

„I go through a lot of depression, and I know other people do, too, but I have an outlet that so many people don't. If you have that inside of you and can't get it out, what do you do?“

„Bing? Who the fuck uses Bing?“

After being asked "What about Bing?", after stating stats of 152 million Google searches for her name, in "Billie Eilish: Same Interview, The Third Year", Vanity Fair (25 November 2019) https://www.youtube.com/watch?v=YltHGKX80Y8

„If teardrops could be bottled
There'd be swimming pools filled by models
Told a tight dress is what makes you a whore
If "I love you" was a promise
Would you break it, if you're honest
Tell the mirror what you know she's heard before
I don't wanna be you anymore“

„There are alway going to be bad things. But you can write it down and make a song out of it.“

„Don't be cautious, don't be kind
You committed, I'm your crime
Push my button anytime
You got your finger on the trigger, but your trigger finger's mine“

"Ocean Eyes" — though her breakthrough hit after she posted her performance of it https://www.youtube.com/watch?v=d--DyK0wtYo to SoundCloud for her dance teacher on 18 November 2015, the lyrics were written entirely by her brother Finneas O'Connell, who also collaborates with her on most of her other musical work. · Official Music Video https://www.youtube.com/watch?v=viimfQi_pUwMisattributed