„every time God forgives us, God is saying that God's own rules do not matter as much as the relationship that God wants to create with us.“

Source: Falling Upward: A Spirituality for the Two Halves of Life

„For Christians, the rules are clear. They are under order to forgive. We must follow those orders, no matter how difficult they appear. If we do not forgive, God will not forgive us. That is the beginning and the end of it.“

Additional remarks about the proposed Reconciliation and Unity Commission, Address to the nation at the National Day of Prayer in Fiji combined church service http://www.fiji.gov.fj/publish/page_4615.shtml, Post Fiji Stadium, Suva, 15 May 2005

„It's so much easier to create our own gods; gods that are fully knowable.“

Open Letter To SatanistsContext: It's so much easier to create our own gods; gods that are fully knowable. Those are the gods of atheism, occultism, religion and sometimes even Christianity. Then, of course, there are those prejudices that we demand of our gods. Women who take offense at a "male" God create for themselves a female or neuter god. There, we have all the racial gods, the black gods, white gods, and cultural gods, the Spanish gods, African gods, Indian gods and so on. All of them called god. And yet none of them are truly Him. Some may be tiny glimpses of Him. Maybe His big toe or little finger, but nothing more. Others are not even that. They’re only delusions from our prejudices.

The Saviors of God (1923)Context: We do not struggle for ourselves, nor for our race, not even for humanity.
We do not struggle for Earth, nor for ideas. All these are the precious yet provisional stairs of our ascending God, and they crumble away as soon as he steps upon them in his ascent.
In the smallest lightning flash of our lives, we feel all of God treading upon us, and suddenly we understand: if we all desire it intensely, if we organize all the visible and invisible powers of earth and fling them upward, if we all battle together like fellow combatants eternally vigilant — then the Universe might possibly be saved.
It is not God who will save us — it is we who will save God, by battling, by creating, and by transmuting matter into spirit.

„God will not forgive us if we fail.“

As quoted in Understanding the Cold War : A Historian's Personal Reflections (2002) by Adam Bruno Ulam and Paul Hollander, p. 269

„I am confident that the whole Church, which is in such need of mercy for we are sinners, will be able to find in this Jubilee the joy of rediscovering and rendering fruitful God’s mercy, with which we are all called to give comfort to every man and every woman of our time. Do not forget that God forgives all, and God forgives always. Let us never tire of asking forgiveness. Let us henceforth entrust this Year to the Mother of Mercy, that she turn her gaze upon us and watch over our journey: our penitential journey, our year-long journey with an open heart, to receive the indulgence of God, to receive the mercy of God.“ 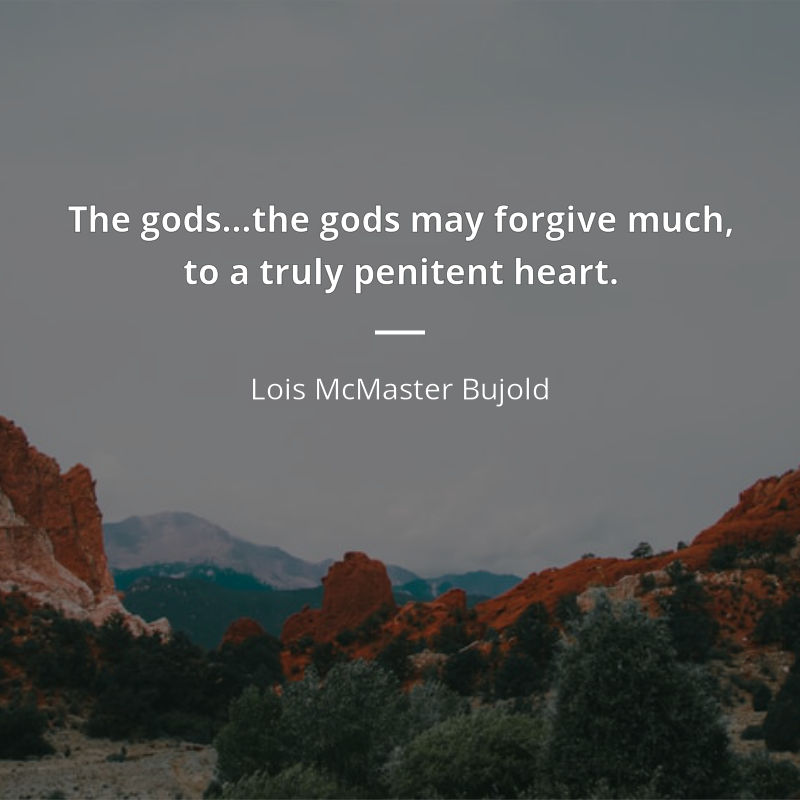 „The gods…the gods may forgive much, to a truly penitent heart.“

„God cares about every area of our lives, and God wants us to ask for help.“

„For each one of us, there is only one thing necessary: to fulfill our own destiny, according to God's will, to be what God wants us to be.“

—  Thomas Merton, book No Man Is an Island

Source: No Man Is an Island

„… if God took the trouble to tell us eight hundred times to be glad and rejoice, He must want us to do it—SOME.“

„God leads us. God will do the right thing at the right time. And what a difference that makes.“

Source: Traveling Light: Releasing the Burdens You Were Never Intended to Bear

„The gods have their own rules.“

Source: Your Best Life Now: 7 Steps to Living at Your Full Potential

As quoted in The Cosmic Code : Quantum Physics As The Language Of Nature (1982) by Heinz R. Pagels, p. 295; also in Paul Adrien Maurice Dirac : Reminiscences about a Great Physicist (1990) edited by Behram N. Kursunoglu and Eugene Paul Wigner, p. xv

„We create gods and struggle with them, and they bless us.“

Source: Demian (1919), p. 188Context: We aren't pigs as you seem to think, but human beings. We create gods and struggle with them, and they bless us.

„It is the furious longing to give finality to the Universe, to make it conscious and personal, that has brought us to believe in God, to wish that God may exist, to create God, in a word.“

The Tragic Sense of Life (1913), VII : Love, Suffering, PityContext: It is the furious longing to give finality to the Universe, to make it conscious and personal, that has brought us to believe in God, to wish that God may exist, to create God, in a word. To create Him, yes! This saying ought not to scandalize even the most devout theist. For to believe in God is, in a certain sense, to create Him, although He first creates us. It is He who is continually creating Himself.

„Transcendence is the way God is immanent. God is present in every created reality, without being identified with it. This is the meaning of God’s transcendence.“

„God depends on us. It is through us that God is achieved.“

„We do not only free God by battling and subduing the visible world about us; we also create God.
"Open your eyes," God shouts; "I want to see! Prick up your ears, I want to hear! March in the front ranks: you are my head!"“

„God in the depths of us receives God who comes to us: it is God contemplating God.“

Quoted in An Anthology of Mysticism and Mystical Philosophy' (1927) by William Kingsland, God is more interior to us than we are to ourselves. His acting in us is nearer and more inward than our own actions. God works in us from inside outwards; creatures work on us from the outside p. 94