„Who knows?
Better times may come to those in pain.“ 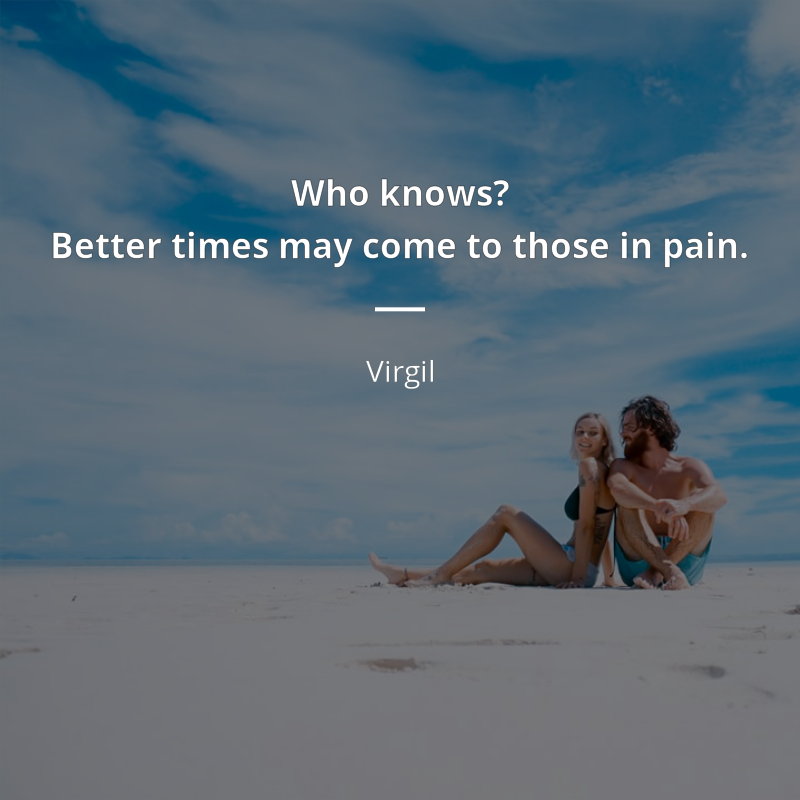 —  Carson McCullers, book The Heart Is a Lonely Hunter

Source: The Heart is a Lonely Hunter

„Give us back our suffering, we cry to Heaven in our hearts — suffering rather than indifferentism; for out of nothing comes nothing. But out of suffering may come the cure. Better have pain than paralysis!“

—  Florence Nightingale English social reformer and statistician, and the founder of modern nursing 1820 - 1910

Cassandra (1860)Context: Give us back our suffering, we cry to Heaven in our hearts — suffering rather than indifferentism; for out of nothing comes nothing. But out of suffering may come the cure. Better have pain than paralysis! A hundred struggle and drown in the breakers. One discovers the new world. But rather, ten times rather, die in the surf, heralding the way to that new world, than stand idly on the shore!

„It takes courage to love, but pain through love is the purifying fire which those who love generously know.“

My Day (1935–1962)Context: It takes courage to love, but pain through love is the purifying fire which those who love generously know. We all know people who are so much afraid of pain that they shut themselves up like clams in a shell and, giving out nothing, receive nothing and therefore shrink until life is a mere living death. (1 April 1939)

„The time must come when, great and pressing as change and betterment may be, they do not involve killing and hurting people.“

„For the first time science and medicine can diminish drudgery and pain.
Only those who see the invisible can do the impossible.“

—  Bernard Lown American cardiologist developer of the DC defibrillator and the cardioverter, as well as a recipient of the Nobel Peace… 1921

Though sometimes quoted as if he were author of it, the expression "Only those who see the invisible can do the impossible" is one that greatly predates Lown's use of it; it has also been attributed to Thomas Jefferson, Jesus and Mrs. Charles E. Cowman, but the earliest published expression yet located seems to have been one by American Baptist minister Rev. Robert Stuart MacArthur in Royal Messages of Cheer and Comfort Beautifully Told (1909) edited by Sarah Conger Robinson, p. 58A Prescription for Hope (1985)Context: We must hold fast to the dream that reason will prevail. The world today is full of anguish and dread. As great as is the danger, still greater is the opportunity. If science and technology have catapulted us to the brink of extinction, the same ingenuity has brought humankind to the boundary of an age of abundance.
Never before was it possible to feed all the hungry. Never before was it possible to shelter all the homeless. Never before was it possible to teach all the illiterates. Never before were we able to heal so many afflictions. For the first time science and medicine can diminish drudgery and pain.
Only those who see the invisible can do the impossible. But in order to do the impossible, in the words of Jonathan Schell, we ask "not for our personal survival: we ask only that we be survived. We ask for assurance that when we die as individuals, as we know we must, mankind will live on".

„The grass grows over the graves, time overgrows the pain. The wind blew away the traces of those who had departed; time blows away the bloody pain and the memory of those who did not live to see their dear ones again—and will not live, for brief is human life, and not for long is any of us granted to tread the grass.“

„One of the painful things about our time is that those who feel certainty are stupid, and those with any imagination and understanding are filled with doubt and indecision.“

—  Bertrand Russell logician, one of the first analytic philosophers and political activist 1872 - 1970

Part I: Man and Nature, Ch. 1: Current Perplexities, pp. 4–51950s, New Hopes for a Changing World (1951)Context: Consider MacArthur and his Republican supporters. So limited is his intelligence and his imagination that he is never puzzled for one moment. All we have to do is to go back to the days of the Opium War. After we have killed a sufficient number of millions of Chinese, the survivors among them will perceive our moral superiority and hail MacArthur as a saviour. But let us not be one-sided. Stalin, I should say, is equally simple- minded and equally out of date. He, too, believes that if his armies could occupy Britain and reduce us all to the economic level of Soviet peasants and the political level of convicts, we should hail him as a great deliverer and bless the day when we were freed from the shackles of democracy. One of the painful things about our time is that those who feel certainty are stupid, and those with any imagination and understanding are filled with doubt and indecision.

„Better to know the quick pain of truth than the ongoing pain of a long-held false hope.“

Source: Voice of the Gods

„Look beyond your self-importance and pain. You will know yourself better.“

„People who put principles before people are people who hate people. They don’t much care about how well it works, just about how right it is... they may even like it better if it inflicts enough pain.“

„The paradox of vengefulness is that it makes men dependent upon those who have harmed them, believing that their release from pain will come only when their tormentors suffer.“

„There are many who do not know they are fascists but will find it out when the time comes.“

—  Ernest Hemingway, book For Whom the Bell Tolls

Source: For Whom the Bell Tolls

„No one knows how greatness comes to a man. It may lie in his blackness, sleeping, or it may lance into him like those driven fiery particles from outer space. These things, however, are known about greatness: need gives it life and puts it in action; it never comes without pain; it leaves a man changed, chastened, and exalted at the same time — he can never return to simplicity.“

„Everything comes in time to him who knows how to wait.“

„Today I know this: when it comes time to take stock, the most painful wound is that of broken friendships; and there is nothing more foolish than to sacrifice a friendship to politics.“

„It was one of those rare smiles with a quality of eternal reassurance in it, that you may come across four or five times in life.“

„A mistake constantly made by those who should know better is to judge people of the past by our standards rather than their own. The only way men or women can be judged is against the canvas of their own time.“

„It is an extraordinary act of courage,' said Tulas Shorn, 'to come to know a stranger's pain.“