„He who has imagination without learning has wings but no feet.“ 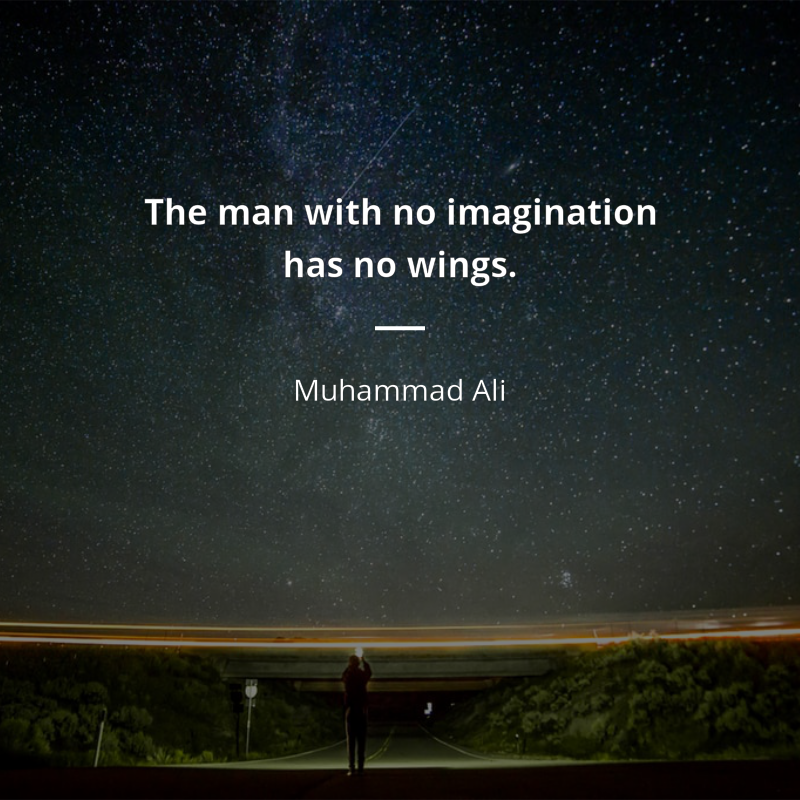 „The man with no imagination has no wings.“

„Eneke the bird was asked why he was always on the wing and he replied: "Men have learned to shoot without missing their mark and I have learned to fly without perching on a twig."“

„[Pricasso] has achieved a good likeness and I can't imagine how he painted it without brushes or conventional equipment.“

2010s, League Confederation Goes Outer-Track (September 2018)Context: While watching Moon and Kim disport themselves on Mount Paektu — the modern nationalist myth of the ancient iconicity of which mountain our media swallowed hook, line and sinker — I was struck by a sobering thought: It has already become easier to imagine Seoul with a Kim Il Sung statue than to imagine Pyongyang without one. Not a lot easier, but easier. We may all disagree about what exactly a North-South league will mean, or even whether it will come to pass. But let’s stop the denials — the old-fashioned denials — that this is what the two Koreas are working on.

„specialists without spirit, sensualists without heart; this nullity imagines that it has attained a level of civilization never before achieved.“

—  Max Weber, book The Protestant Ethic and the Spirit of Capitalism

Source: The Protestant Ethic and the Spirit of Capitalism

„Those who look for contradictions will be amply satisfied. The profession of a performer is full of paradoxes, and he has to learn to live with them. He has to forget himself and control himself; he has to observe the composer's wishes to the letter and create the music on the spot; he has to be part of the music market and yet retain his integrity.“

„Who can be forced has not learned how to die.“

Hercules Furens (The Madness of Hercules), line 426; (Megara).Alternate translation: Who can be compelled does not know how to die.TragediesOriginal: (la) Cogi qui potest nescit mori.

„The learner has to realize that he or she is the one who sets the objective, the learning tasks and the stage for success.“

„If we assume man has been corrupted by an artificial civilization, what is the natural state? the state of nature from which he has been removed? imagine, wandering up and down the forest without industry, without speech, and without home.“

„He has not lived in vain
who learns to be unruffled
by loss, by gain,
by, joy, by pain.“

„It struck me that his dialect was actually the nondialect of someone who has learned a new language perfectly but without the lazy shortcuts of someone born to it.“

„I learned this, at least, by my experiment; that if one advances confidently in the direction of his dreams, and endeavors to live the life which he has imagined, he will meet with a success unexpected in common hours..“

Variant: I learned this, at least, by my experiment: that if one advances confidently in the direction of his dreams, and endeavors to live the life which he has imagined, he will meet with a success unexpected in common hours.Source: Walden: Or, Life in the Woods

„The only person who is educated is the one who has learned how to learn and change.“

„Without this playing with fantasy, no creative work has ever yet come to birth. The debt we owe to the play of the imagination is incalculable.“

Source: Psychological Types, or, The Psychology of Individuation (1921), Ch. 1, p. 82Context: The dynamic principle of fantasy is play, a characteristic also of the child, and as such it appears inconsistent with the principle of serious work. But without this playing with fantasy no creative work has ever yet come to birth. The debt we owe to the play of imagination is incalculable. It is therefore short-sighted to treat fantasy, on account of its risky or unacceptable nature, as a thing of little worth.

„An erection is a thought and the orgasm an act of the imagination. The male has to will his sexual authority before the woman who is a shadow of his mother and of all women. Failure and humiliation constantly wait in the wings. No woman has to prove herself a woman in the grim way a man has to prove himself a man. He must perform, or the show does not go on. Social convention is irrelevant. A flop is a flop.“

„Pure love is in the will alone; it is no sentimental love, for the imagination has no part in it; it loves, if we may so express it, without feeling, as faith believes without seeing.“

„There is no understanding of the past without personal experience, without reliving it in imagination. A word is nothing unless it has values and an atmosphere, unless you grasp its historical significance.“

„Such promises are only for the gulls that accept the ordinary. One who has touched excellence in his learning has no need of that kind of promise.“