„I will drive flat out all the time … I love racing.“ 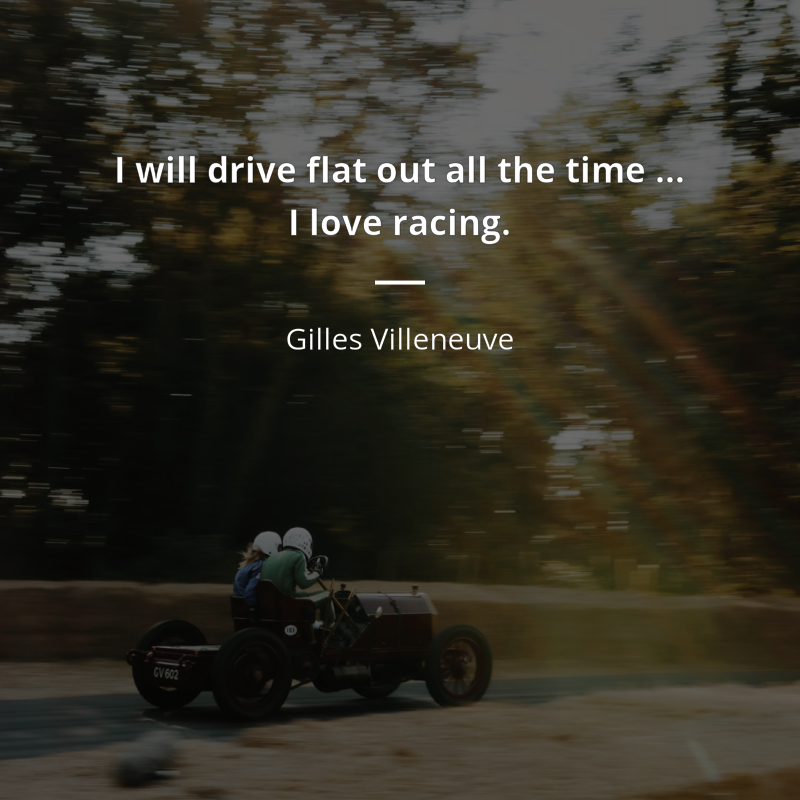 „I don't think any time's a time to call out for an all-out war against police or any race of people. I thought that was an ignorant statement“

Press conference (16 September 2015), as quoted in "Video: Richard Sherman speaks passionately on Black Lives Matter" https://web.archive.org/web/20150917000340/http://www.seattletimes.com/sports/seahawks/video-richard-sherman-speaks-passionately-on-black-lives-matter/ (16 September 2015), by Bob Condotta, The Seattle Times, Seattle, Washington.Press conference (16 September 2015)Context: A lot of people had sent to me over the weekend, but I thought this would be the best place to address it. There were some points in that article, or in that post, that were relevant and I could agree with. But there were also some obviously ignorant points in there. I don't think any time's a time to call out for an all-out war against police or any race of people. I thought that was an ignorant statement. But as a black man, I do understand that black lives matter. You know, I stand for that, I believe in that wholeheartedly.

„There is a remedy for all things but death, which will be sure to lay us out flat some time or other.“

„O hurry to the ragged wood, for there
I will drive all those lovers out and cry—
O my share of the world, O yellow hair!
No one has ever loved but you and I.“

The Ragged Wood http://poetry.poetryx.com/poems/1673/In The Seven Woods (1904)Context: p>O hurry where by water among the trees
The delicate-stepping stag and his lady sigh,
When they have but looked upon their images--
Would none had ever loved but you and I!Or have you heard that sliding silver-shoed
Pale silver-proud queen-woman of the sky,
When the sun looked out of his golden hood?--
O that none ever loved but you and I!O hurry to the ragged wood, for there
I will drive all those lovers out and cry—
O my share of the world, O yellow hair!
No one has ever loved but you and I.</p

„If my activism, however well-motivated, drives out love, then I have misunderstood Jesus’ gospel. I am stuck with law, not the gospel of grace.“

„I pull you close but when we kiss I can feel a doubt.
I remember back when we started,
My kisses used to turn you inside out.
I used to drive you to work in the morning;
Friday night I'd drive you all around.
You used to love to drive me wild,
But lately girl you get your kicks from just driving me down.“

„I'm out of sight, I'm out of mind
I'll do it all for you in time
And out of all these things I've done I think I love you better now.“

„Intelligence is one of the greatest human gifts. But all too often a search for knowledge drives out the search for love.“

Flowers for Algernon (1966)Context: Don't misunderstand me," I said. "Intelligence is one of the greatest human gifts. But all too often a search for knowledge drives out the search for love. This is something else I've discovered for myself very recently. I present it to you as a hypothesis: Intelligence without the ability to give and receive affection leads to mental and moral breakdown, to neurosis, and possibly even psychosis. And I say that the mind absorbed in and involved in itself as a self-centered end, to the exclusion of human relationships, can only lead to violence and pain.

'Where Do We Go From Here?" as published in Where Do We Go from Here : Chaos or Community? (1967), p. 62; many statements in this book, or slight variants of them, were also part of his address Where Do We Go From Here?" which has a section below. A common variant appearing at least as early as 1968 has "Returning violence for violence multiplies violence..." An early version of the speech as published in A Martin Luther King Treasury (1964), p. 173, has : "Returning hate for hate multiplies hate..."1960sSource: A Testament of Hope: The Essential Writings and SpeechesContext: The ultimate weakness of violence is that it is a descending spiral, begetting the very thing it seeks to destroy. Instead of diminishing evil, it multiplies it. Through violence you may murder the liar, but you cannot murder the lie, nor establish the truth. Through violence you may murder the hater, but you do not murder hate. In fact, violence merely increases hate. So it goes. … Returning hate for hate multiplies hate, adding deeper darkness to a night already devoid of stars. Darkness cannot drive out darkness: only light can do that. Hate cannot drive out hate: only love can do that.

„I love Armenian people — all of them. I love them because they are a part of the enormous human race, which of course I find simultaneously beautiful and vulnerable.“

„All I know is that I love you. And for the first time, that's good enough.“

„By being a racing driver you are under risk all the time. By being a racing driver means you are racing with other people. And if you no longer go for a gap that exists, you are no longer a racing driver because we are competing, we are competing to win. And the main motivation to all of us is to compete for victory, it's not to come 3rd, 4th, 5th or 6th. I race to win as long as I feel it's possible. Sometimes you get it wrong? Sure, it's impossible to get it right all the time. But I race designed to win, as long as I feel I'm doing it right.“

„You hear people in restaurants competing with each other "I love you". "No, I love you". "Yeah, but I REALLY love you. I love pencils that you have sucked and thrown away ten years ago. I love your eyebrows and your ancestry and EVERYTHING ABOUT YOU! Just eat your food and let me love you, don't speak!" But what they don’t know, of course, at the time is that that dialogue is actually from a really bad science fiction film written by nature - really, what they're saying to one another is: "The race must continue, the race must continue! My vadudium is pointing at your phenungulator, the race must continue!"“

„Well I'm starvin' and freezin'
In this measly old bed
(Then I'll crawl across the salt flats
To stroke your sweet head)
Come across the desert,
with no shoes on?
(I love you truly,
or I love no-one)“

„What, I ask, drives me to disorder? How can I diagnose myself? All I feel, most immediately, is the most anguished need for physical love and mental companionship“

„I owe her everything and I love her and I tell her these days, although every time I say it, it gets a little diluted. I think you run out of I love yous.“

—  Ned Vizzini, book It's Kind of a Funny Story

Source: It's Kind of a Funny Story

„It was you I thought of all the time, I gave to them the love you did not need: lavished on them a love that was not theirs.“

—  Oscar Wilde, A Woman of No Importance

Source: A Woman of No Importance

„Maybe under all that guilt and certainty that he couldn't love again, he still wanted me. I would have liked to have found out. But I didn't have the time.
Instead, I punched him.“

„But there is a scary side to acting for me, because I have always wanted to develop rather than plateau out. When people come to me and tell me I was terrific in this or that, I do not want to fall flat on my face the next time. But, tough, I have fallen flat before. You just get up and dust yourself off.“

„I asked Rajiv to be frank. I had no love for office or power. I could walk out any time. I was like a sojourner in an inn.“

When there were rumours that there were proposals under consideration by Rajiv Gandhi and his cronies to either send him back to Punjab as Chief Minister or Impeach him as President, in: K.R. Sundar Rajan "Presidential Years:Zail Singh's posthumous defence of his controversial tenure."

„All the hundreds of millions of people who, in their time, believed the Earth was flat never succeeded in unrounding it by an inch.“

—  Isaac Asimov American writer and professor of biochemistry at Boston University, known for his works of science fiction and popular … 1920 - 1992