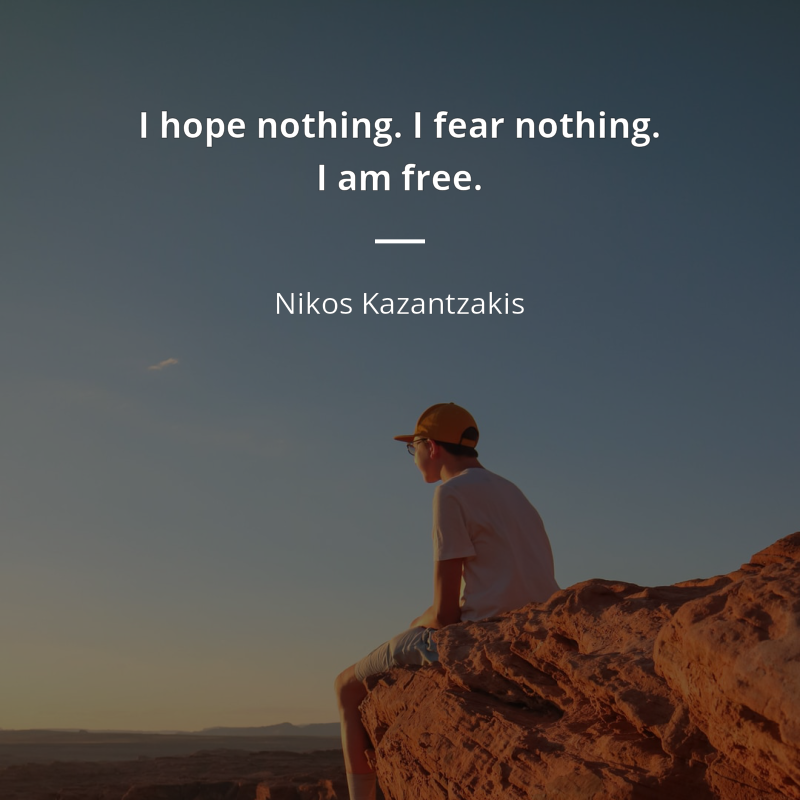 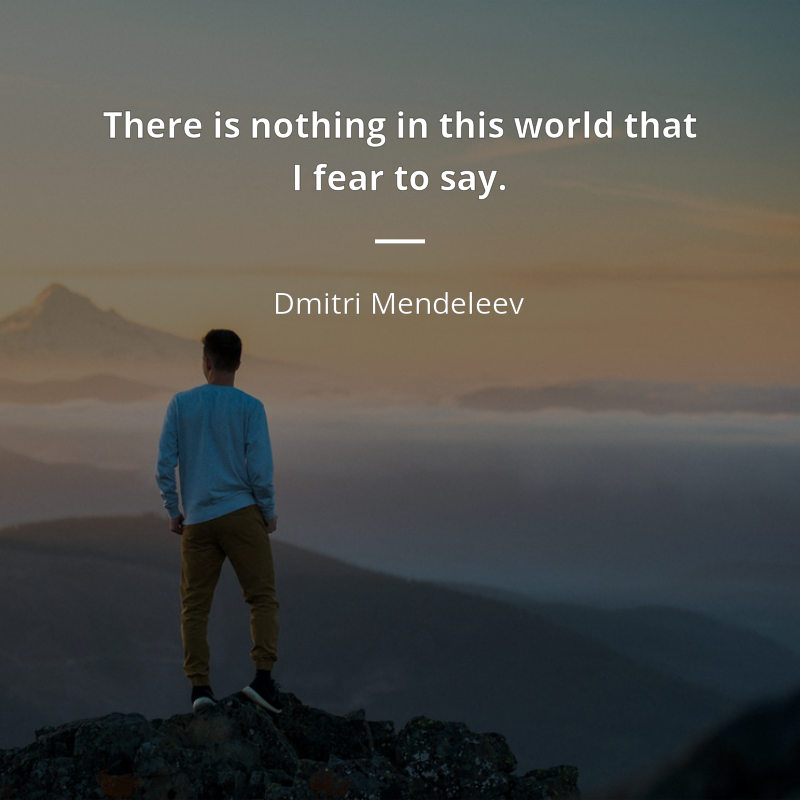 „There is nothing in this world that I fear to say.“

„It will lead to nothing, I fear, sir“

Remarked to William Palmer, on the eve of his 1840-1 journey to Russia to improve Anglican-Orthodox relations. The trip reaped little success; quoted in Notes of a Visit to the Russian Church in the Years 1840, 1841, by William Palmer, 1882, p. 10.

„I do not hope for anything. I do not fear anything, I have freed myself from both the mind and the heart, I have mounted much higher, I am free.“

This passage was used for Kazantzakis' epitaph: "Δεν ελπίζω τίποτα, δε φοβούμαι τίποτα, είμαι λεύτερος<!--[sic]-->."
I hope for nothing. I fear nothing. I am free.
Variant translation: I expect nothing. I fear no one. I am free.The Saviors of God (1923)Context: Nothing exists! Neither life nor death. I watch mind and matter hunting each other like two nonexistent erotic phantasms — merging, begetting, disappearing — and I say: "This is what I want!"
I know now: I do not hope for anything. I do not fear anything, I have freed myself from both the mind and the heart, I have mounted much higher, I am free. [Δεν ελπίζω τίποτα, δεν φοβούμαι τίποτα, λυτρώθηκα από το νου κι από την καρδιά, ανέβηκα πιο πάνω, είμαι λεύτερος. ] This is what I want. I want nothing more. I have been seeking freedom.

„If I am to be remembered, I hope it will not be primarily for my specialized scientific work, but as a generalist; one to whom, enlarging Terence's words, nothing human and nothing in external nature was alien.“

„The person who wants nothing, hopes for nothing, and fears nothing can never be an artist.“

„There is nothing that is quite so reassuring in an awkward situation as knowing that one is well turned-out, and while I hope I am not so fainthearted as to require such stratagems, I am not so foolish as to overlook their value.“

„Peace I do not find, and I have no wish to make war; and I fear and hope, and burn and am of ice.“

„Death isn't peaceful; it is just nothing. Everything is gone. No more sunrises, no more hopes, no more fears. Nothing.“

Attributed, Chatham House Talk (September 28, 2011)Context: I want to put paid to this idea that if you've nothing to fear, you've nothing to hide. I interviewed a really interesting guy in this book. He ran the data campaign for the Obama election, when Obama was being elected. And what they do is they just harvest huge troves of databases. And they're doing it for the basis of trying to predict who might vote for Obama in the election. And he just took me through this whole data business – data brokerage, data dealing. And he showed me this 10,000... well, it was a 464 page dictionary, a data dictionary, with 10,000 data units in it. So that's for every person, it's 10,000 things that you could find out about that person. Their political association, if they drink Coke or Diet Coke, what sort of magazines do they subscribe to, have they ever had any court cases against them. It's just like a raft of stuff. The problem is, is how these things are used. It's fine if somebody wants to sell you some products, but increasingly states are accessing all this information. And they're building algorithms to try and predict criminals. … It's pretty well-known that the National Security Agency in America is building algorithms and it's taking all of these datasets and basically trying to predict who is going to be a problem for us in future. And to me that just seems an incredibly dangerous road for us to go down, that you’re no longer innocent until proven guilty. We’re starting to imagine or predict who is going to be a problem.

„I am, I hope, very thankful that in the withdrawal of the powers and things of life, the good hope is left with me, which makes the contemplation of death a comfort — not a fear.“

Letter to Auguste de la Rive (1861), as quoted in The Philosopher's Tree : A Selection of Michael Faraday's Writings (1999) edited by Peter Day, p. 199Context: I am, I hope, very thankful that in the withdrawal of the powers and things of life, the good hope is left with me, which makes the contemplation of death a comfort — not a fear. Such peace is alone the gift of God, and as it is He who gives it, why should we be afraid? His unspeakable gift in His beloved Son is the ground of no doubtful hope, and there is the rest for those who )like you and me) are drawing near the latter end of our terms here below. I do not know, however why I should join you with me in years. I forget your age, but this I know (and feel as well) that next Sabbath day (the 22nd) I shall complete my 70th year. I can hardly think myself so old as I write to you — so much of cheerful spirit, ease and general health is left to me, and if my memory fails, why it causes that I forget troubles as well as pleasure and the end is, I am happy and content.

„I hope you know that this has nothing to do with you.“

—  Fergie singer from the United States 1975

„Then I choose to drown. In hope. Rather than float into nothing.“

—  Melina Marchetta, Finnikin of the Rock

Source: Finnikin of the Rock

„I trust to luck and do nothing but work, hoping that all will end well.“

„Fear tends to come from ignorance. Once I knew what the problem was, it was just a problem, nothing to fear.“

—  Patrick Rothfuss, book The Name of the Wind

„I have accustomed my features always to assume an expression quite contrary to my feelings; thus I am able to feign outwardly, yet within know nothing of dissumulation. This habit is easy if compared to the practice of hoping for nothing“

The Book of My Life (1930)Context: I have accustomed my features always to assume an expression quite contrary to my feelings; thus I am able to feign outwardly, yet within know nothing of dissumulation. This habit is easy if compared to the practice of hoping for nothing, which I have bent my efforts toward acquiring for fifteen successive years, and have at last succeeded.<!--Ch. 13

The Saviors of God (1923)Context: I am not alone in my fear, nor alone in my hope, nor alone in my shouting. A tremendous host, an onrush of the Universe fears, hopes, and shouts with me.
I am an improvised bridge, and when Someone passes over me, I crumble away behind Him.