„To do the useful thing, to say the courageous thing, to contemplate the beautiful thing: that is enough for one man's life.“

Source: The Use of Poetry and the Use of Criticism 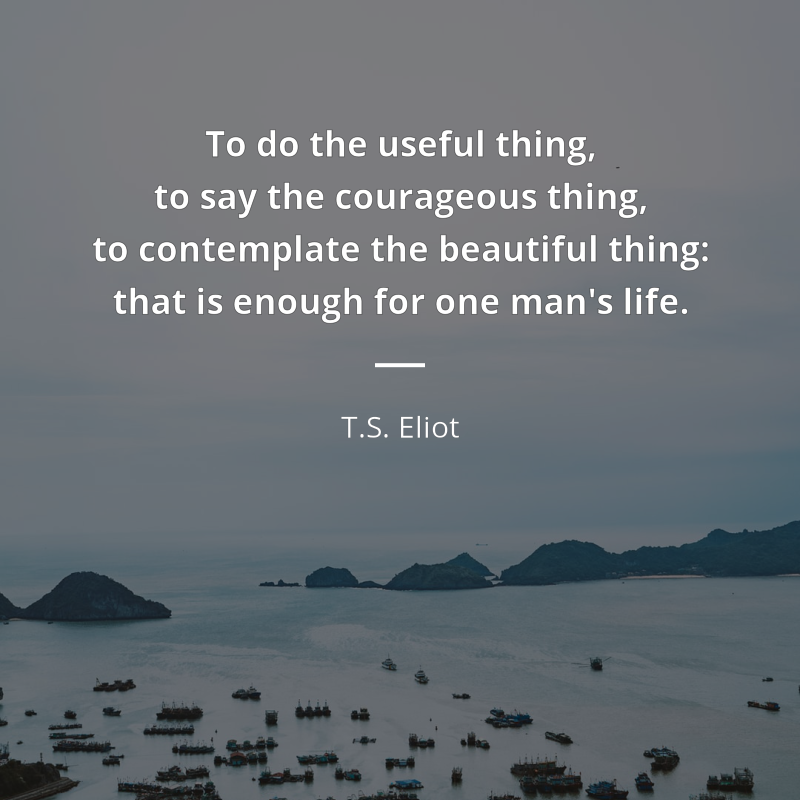 „Beauty in things exists in the mind which contemplates them“

„Hope has two beautiful daughters. Their names are anger and courage; anger at the way things are, and courage to see that they do not remain the way they are.“

As quoted in Spirituality and Liberation: Overcoming the Great Fallacy (1988) by Robert McAfee Brown, p. 136Disputed

„It is a brave and stupid thing, a beautiful thing, to waste one's life for love.“

Source: The Confessions of Max Tivoli

„It is a wholesome and necessary thing for us to turn again to the earth and in the contemplation of her beauties to know the sense of wonder and humility.“

Source: The Sense of Wonder

„There is only one thing that it requires real courage to say, and that is a truism.“

„Caring too much for objects can destroy you. Only—if you care for a thing enough, it takes on a life of its own, doesn’t it? And isn’t the whole point of things—beautiful things—that they connect you to some larger beauty?“

„Beauty is no quality in things themselves: It exists merely in the mind which contemplates them; and each mind perceives a different beauty.“

Part I, Essay 23: Of The Standard of TasteEssays, Moral, Political, and Literary (1741-2; 1748)Source: Of the Standard of Taste and Other EssaysContext: Beauty is no quality in things themselves: It exists merely in the mind which contemplates them; and each mind perceives a different beauty. One person may even perceive deformity, where another is sensible of beauty; and every individual ought to acquiesce in his own sentiment, without pretending to regulate those of others.

„A beautiful thing is precious, no matter the price. Those who do not know how to see the precious things in life will never be happy…“

„It was as simple as that - they met. As simple as only beautiful things can be beautiful, as only life-changing things, turning-point things, can be simple.

„Ennobling this dull pomp, the life of kings,
By contemplation of diviner things.“

„Every day I discover
more and more
beautiful things.
It’s enough to drive one mad.
I have such a desire
to do everything,
my head is bursting with it.“

Variant: Everyday I discover more and more beautiful things. It’s enough to drive one mad. I have such a desire to do everything, my head is bursting with it.

„God, give us grace to accept with serenity
the things that cannot be changed, courage
to change the things which should be changed,
and the wisdom to distinguish the one from the other.“

Niebuhr's preferred form, as declared by his widowThe Serenity Prayer (c. 1942)Variant: God, give us grace to accept with serenity the things that cannot be changed, courage to change the things which should be changed, and the wisdom to distinguish the one from the other.

Homily at the morning Mass at the Casa Santa Marta (23 February 2017), as quoted in "Pope: Don't put off conversion, give up a double life" at Vatican Radio (23 February 2017) http://en.radiovaticana.va/news/2017/02/23/pope_dont_put_off_conversion,_give_up_a_double_life/1294470; also quoted in "Did Pope Francis Say It Was Better to Be an Atheist Than a Bad Catholic? at snopes.com (28 February) http://www.snopes.com/pope-francis-bad-catholics/2010s, 2017Context: What is scandal? Scandal is saying one thing and doing another; it is a double life, a double life. A totally double life: "I am very Catholic, I always go to Mass, I belong to this association and that one; but my life is not Christian, I don’t pay my workers a just wage, I exploit people, I am dirty in my business, I launder money …" A double life. And so many Christians are like this, and these people scandalize others. How many times have we heard — all of us, around the neighborhood and elsewhere — "but to be a Catholic like that, it’s better to be an atheist." It is that, scandal. You destroy. You beat down. And this happens every day, it’s enough to see the news on TV, or to read the papers. In the papers there are so many scandals, and there is also the great publicity of the scandals. And with the scandals there is destruction.

„the first quality of an honest man is contempt for religion, which would have us afraid of the most natural thing in the world, which is death; and would have us hate the one beautiful thing destiny has given us, which is life.“

—  Umberto Eco, book The Island of the Day Before

Source: The Island of the Day Before

„And if there is one thing that he and this year’s anniversary should teach us, if there’s one lesson I hope that Malia and Sasha and young people everywhere learn from this day, it’s that with enough effort, and enough empathy, and enough perseverance, and enough courage, people who love their country can change it.“

„Clothe yourself with a hero’s courage, and withdraw for a little space from the opinions of the common man. Form a proper conception of the image of virtue, a thing of exceeding beauty and grandeur; this image is not to be worshipped by us with incense or garlands, but with sweat and blood.“

„One of the saddest things in life, is the things one remembers.“

„Life is a beautiful, magnificent thing, even to a jellyfish.“

Calvero's answer to Terry's question: "What is there to fight for?" in Limelight (1952)Context: Life is a beautiful, magnificent thing, even to a jellyfish. … The trouble is you won't fight. You've given up. But there's something just as inevitable as death. And that's life. Think of the power of the universe — turning the Earth, growing the trees. That's the same power within you — if you'll only have the courage and the will to use it.